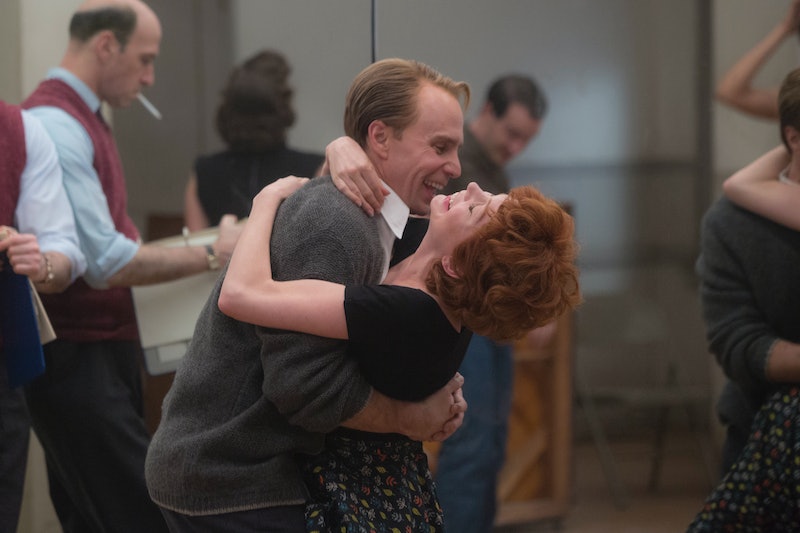 Fosse/Verdon on FX is jumping around the '50s, '60s, and '70s in creative ways that might be difficult to follow without the appropriate Broadway history context. While nonlinear storytelling is entertaining and compelling, it sometimes helps to have a guide handy. Here's the actual timeline of Gwen Verdon and Bob Fosse's relationship that Fosse/Verdon is portraying.

While the below meeting is when and where the pair truly met, and depicted beautifully on Fosse/Verdon, the two legends at least interacted at one of Michael Kidd's parties in 1953 before sparks started to fly. If your only knowledge of Fosse is from The Birdcage, you may recall that Kidd is another choreographer that Robin Williams' character references in that scene. They were in similar circles, which the show glosses over but doesn't ignore. As dancers and choreographer in both the New York theater scene and Hollywood, Fosse and Verdon were aware of one another and likely crossed paths before combining forces on Damn Yankees.

Not to spoil anything from the show, but maybe help clarify, here are the dates of some major events in Fosse and Verdon's personal and professional lives. Both Fosse and Verdon were married before, Fosse twice, and he was with his second wife when he and Verdon officially met. If you're curious about their history, or about a drastic change in hairstyles (and hairlines, in Fosse's case) on the FX series, check it out.

However, the two truly met when the fledgling choreographer asked to meet with Verdon to see if they could work together before she was cast as the demonic temptress Lola. "The synergy that happened in those few days of dance studio rehearsal would greatly change the career paths of both these truly unique talents," notes the Verdon Fosse Legacy's account of this fated meeting.

Damn Yankees is a musical comedy adaptation of Faust, in which a baseball fan strikes a deal with the Devil to become the star player of his favorite team and take them to the playoffs. "Who's Got The Pain," the second episode of Fosse/Verdon that depicts the couple's first meeting, implies that Verdon herself made a Faustian bargain by getting involved with Fosse and having an affair.

Fosse joined Verdon in the film adaptation of Damn Yankees, and their chemistry/teamwork is palpable on screen.

Just to throw some more dates at you from this period in their relationship — Fosse had divorced his second wife, Joan McCracken, in 1959, and she died in 1961. The above interview/performance of "Whatever Lola Wants" from Damn Yankees took place in 1962, two years into their marriage.

In 1963, Fosse took to the stage himself and starred in a revival of Rodgers and Hart's Pal Joey that totally flopped after 15 performances on Broadway. He was also, around the time of his wife's pregnancy and his daughter's birth, directing and choreographing a musical called Little Me.

The couple separated the same year that Cabaret went into production. Based on how Fosse/Verdon portrays that experience, it's easy to see why. Verdon was uncredited for her work on Cabaret, the film adaptation of Sweet Charity before that, and most of her husband's work despite their collaboration.

They met when Reinking was cast in Pippin (she's one of the face painted dancers above) and were together, on and off/casually, for about ten years.

The last of Fosse and Verdon's big theatrical collaborations as director/choreographer and star united Verdon with Chita Rivera, a standout from the Sweet Charity movie, as Roxie Hart and Velma Kelly respectively. It was also this year that Fosse suffered his first heart attack.

1979: Leland Palmer Plays A Version Of Gwen In All That Jazz

Reinking, on the other hand, plays a version of herself in Fosse's thinly-veiled autobiographical film.

Fosse and Verdon never legally divorced, and they were together when he had a heart attack in Washington, DC, and passed soon after.

The nature of their partnership changed over the years but it seems clear that Fosse and Verdon were, at the end of the day, inseparable.