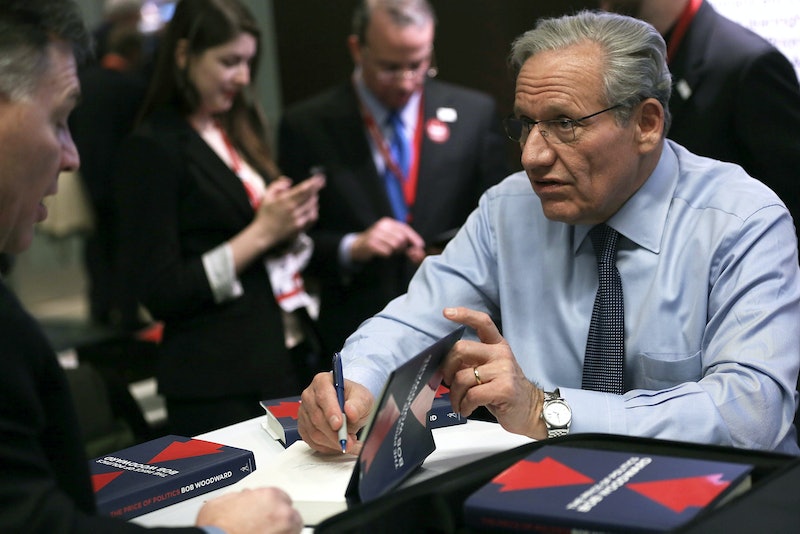 The eminent journalist known for his investigatory takedown of President Richard Nixon is back. And this time, he has an exhaustively reported book that delves into what life at 1600 Pennsylvania Ave. is reportedly like under President Trump. Bob Woodward's Fear: Trump in the White House promises to be unlike his past books, and it's expected to be released a little bit before the midterm elections in November.

The 448-page book “reveals in unprecedented detail the harrowing life inside President Donald Trump’s White House and precisely how he makes decisions on major foreign and domestic policies,” according to the description on Amazon. Woodward has reported on eight presidencies, with 18 previous books on his resume, including ones on George W. Bush and Barack Obama that focused on the wars in Iraq and Afghanistan.

The cover of the book has a red filter stretched across a picture of Trump with the word "Fear" in white letters. Woodward’s latest work is based on “hundreds of hours of interviews with firsthand sources, meeting notes, personal diaries, files and documents,” per the description, that feature "explosive debates and the decision-making in the Oval Office, the Situation Room, Air Force One and the White House residence."

The book is the culmination of eight months of expansive work, CNN reported, and is based mainly on firsthand sources who allowed their interviews to be recorded. Trump did not give an interview to Woodward, CNN's source said, but the title of the book does come from an earlier interview in 2016 that Woodward had with Trump.

During that 2016 interview, Trump had said to Woodward and Washington Post national political reporter Robert Costa, "Real power is — I don't even want to use the word — fear." Now, that quote has become the basis for the title, and it's likely the book will explore that theme under Trump's presidency.

Woodward's books have all explored the uglier sides of past presidencies, and it's likely that this one will be no different, though the title suggests that this upcoming work will focus more on Trump's atypical approach to governance more than an overarching issue, like Obama's Wars or Bush At War. As the book's summary puts it, "Fear is the most intimate portrait of a sitting president ever published during a president's first years in office."

According to CNN's sources, Fear will give readers a scrutinizing account of Trump's thoughts and decisions on a range of issues from "national security to the Russia investigation to the 2017 white supremacist rally in Charlottesville, Virginia." On top of Woodward's interviews with administration officials, the investigative journalist was also given memos, diaries, and notes, including some handwritten by the president, CNN reported.

Woodward has been vocal about President Trump's relentless attacks on the media in the past, and it's more than likely that he'll address the Trump administration's turbulent relationship with news organizations in his book. Speaking at the White House Correspondent's Dinner in 2017, Woodward challenged the president’s accusations that the media makes stuff up.

“Mr President," Woodward had said, "the media is not fake news. Let’s take that off the table going forward."