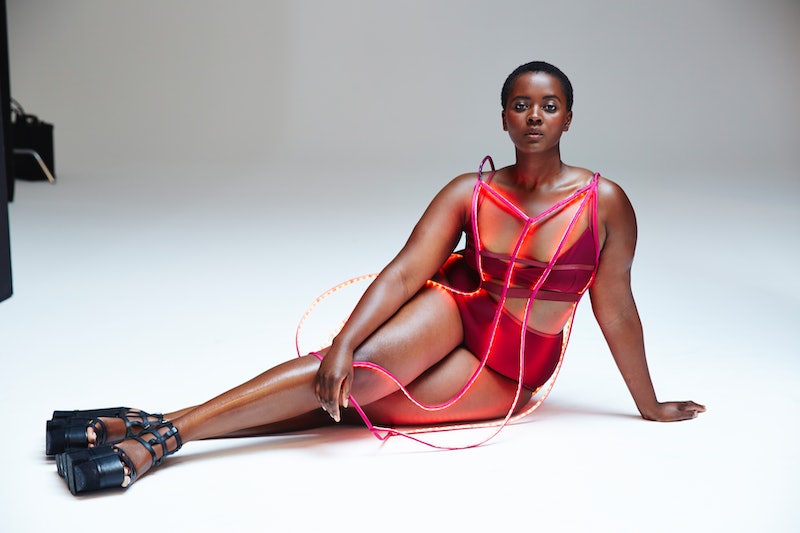 Not long into the start of body image documentary Straight/Curve, we see a group of high school students flicking through glossy magazines. They are each asked to choose an image of "beauty," as defined by American culture: An image of the kind of beauty they feel they are supposed to embody.

One by one, we see their selections. The models and celebrities the students choose are all thin and white. As one young man in the group holds up his pick, we also see a tanned, muscular male model. It's jarring to watch — and a reminder of how far media still has to go.

"Some of the most powerful moments in the film for me are the high school students discussing their body image issues," Straight/Curve director Jenny McQuaile tells Bustle. "These people are our future and it's vital we bring the message of Straight/Curve to them now."

To continue the message of the film, McQuaile and the National Association for Media Literacy Education will kick off Media Literacy Week on Nov. 6 at Fordham University in New York City. The live streamed event will consist of a screening of the documentary, a panel discussion including McQuaile and Claire Mysko, CEO of the National Eating Disorders Association, and led by Bustle's Fashion & Beauty Editor Amanda Richards, and a Q&A portion that invites both IRL and cyber audiences to submit questions to panelists via Twitter.

Presenting a panel at Media Literacy Week and inviting campuses across the country to tune in feels crucial for McQuaile, who, through her research for Straight/Curve, learned that lasting body image issues can start as young as age nine. Other reports suggest that it can happen as young as five. "I don't think it's ever too early to be exposed to the diverse and inclusive imagery from our film or in society in general," she says.

McQuaile believes that media and fashion are at the heart of many of our body image conflicts. "We live in a world of 24/7 media," she says. "We are constantly being bombarded with imagery and messaging as we wait for the bus, as we take the subway, as we listen to a podcast, as we watch TV, as we drive down the street [...] If we do not teach our children, and adults for that matter, how to decipher the messaging they are being exposed to then it can lead to bullying, negative body image, and other serious public health issues."

Deciphering those messages, and demanding that media do better, will be one prime talking point of Straight/Curve's November panel. Although the director does not believe that media should solely define the way we as individuals feel about ourselves and each other, there's no denying that it currently plays a part. Children are, on average, exposed to eight or nine hours of media per day outside of school, after all. "If we want to change something, we have to change the imagery and media we are creating and being exposed to," McQuaile adds. "Whether we like it or not, people do compare themselves to what they see in media. So let's give people something positive to aspire to be. People should feel like they can be their own unique self because of positive messaging from the media."

Something McQuaile will further tackle during the Media Literacy Week panel is fashion's role to play as the potential catalyst for change. "I truly believe the fashion industry is central to this conversation and real change has to happen deep within the fashion industry [...] for real change to happen and for women everywhere to feel seen and represented," she tells Bustle. "Brands, designers, photographers, agents, casting directors, magazine editors, advertisers all need to stand up together and demand a more diverse landscape [...] The unrealistic standard was set by these people of power and reinforced by these people of power and it's going to take these people of power to change it for everybody."

Although not all of us have a role in shaping mass media, there are things that we (as consumers, parents, and educators) can do to positively influence younger generations. For Media Literacy Week, McQuaile collaborated with Bustle, the National Eating Disorder Association, and Girl Up, a United Nations Foundation organization, to create a discussion guide around the film and its ideals that includes information on ways we can inspire micro change day-to-day.

She urges people, especially parents, to "seek out positive social media platforms and encourage your kids to follow those people, brands, organizations, magazines, etc.," she says. "You can seek out more representative programming and movies on TV and watch it with your kids [...] If you can watch something together and then discuss the issues afterwards, you can encourage an open dialogue about bodies and identity and image."

More honest dialogue can never be a bad thing — and there is much more of it to be had on Nov. 6. Keep and eye on Straight/Curve's website and social media pages for more information, and be sure to tune into the live streamed screening and panel event.