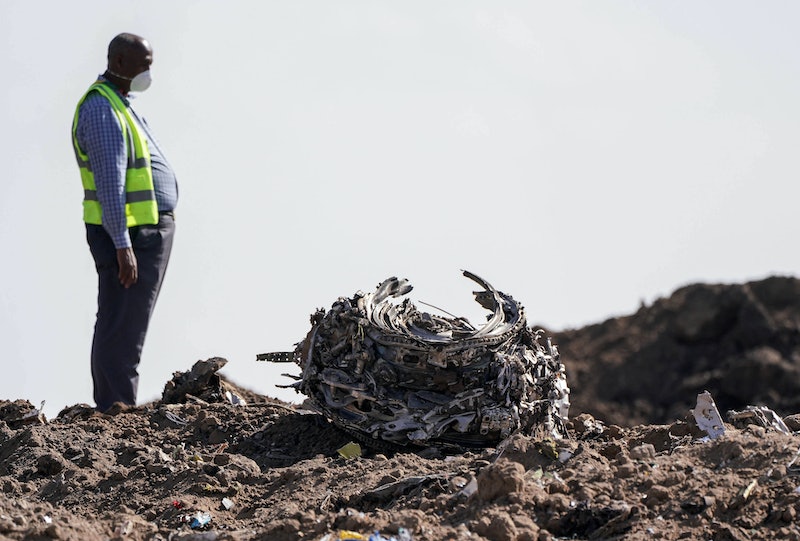 Boeing is facing what appears to be the first lawsuit filed against the jetliner manufacturer over the Ethiopian Airlines crash earlier this month. The family of an Ethiopian Airlines crash victim sued Boeing in federal court Thursday, accusing the company of having "defectively designed" an automated flight control system for the Boeing 737 MAX 8, according to The Washington Post. The lawsuit appears to be the first filed against Boeing over the March 10 crash.

According to Reuters, the lawsuit was filed by the three minor children of Jackson Muson in a federal court in Chicago, Illinois, where the Boeing International Headquarters is located. It argues that Boeing's 737 MAX 8 planes had a defectively designed automated flight control system and that the company failed to warn either pilots or airlines about the allegedly unsound sensors. Bustle has reached out to Boeing for comment.

Muson was both a Rwandan national and an employee of the Office of the United Nations High Commissioner for Refugees (UNHCR) who was among the 157 people killed in the crash, the UN refugee agency said.

"Boeing, having knowledge of all the reports of dangerous conditions and the previous accident that killed over 150 people, should have taken steps to protect the flying public," an attorney representing Musoni's children said in a statement to The Washington Post. "This accident happened when it should have never happened." According to paper, Boeing is likely to face more lawsuits as the families of Ethiopian Airlines crash victims continue to reach out to U.S.-based attorneys and law firms.

News of the Muson family's lawsuit comes on the heels of Boeing announcing it would, going forward, make a previously optional upgraded additional warning system standard issue on all 737 MAX aircraft, TIME magazine has reported. According to NBC News, Boeing also said it had reprogrammed the software on 737 MAX jetliners in an effort to keep erroneous data from launching the aircrafts's anti-stall system, which has been connected to the October Lion Air crash in Indonesia. In the aftermath of the two deadly crashes, Boeing's 737 MAX jetliners were grounded in dozens of countries around the world, including the United States. It's unclear when, or even if, Boeing's 737 MAX will fly again.

Earlier this month, The Wall Street Journal reported that federal prosecutors and Department of Transportation officials were looking into Boeing's development of the 737 MAX aircraft with a federal grand jury issuing a subpoena on behalf of the Justice Department. The Department of Transportation's inspector general's office has also opened an investigation into the Federal Aviation Administration's (FAA) approval of the 737 MAX, while Congress has held two hearings into the agency's approval and oversight of the aircraft.