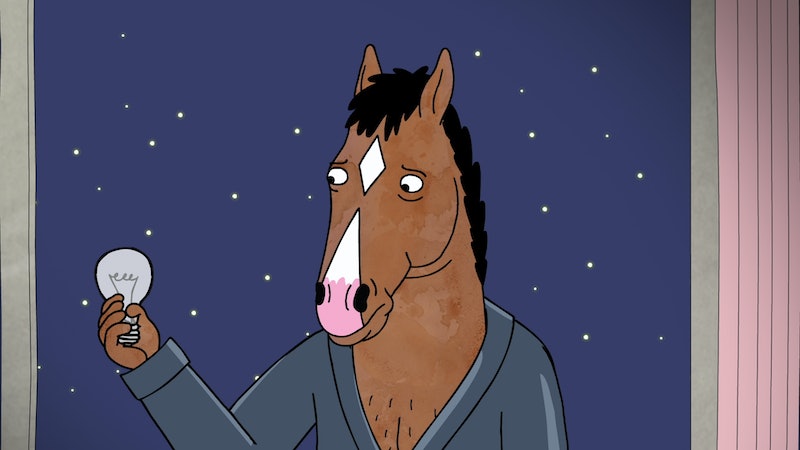 Spoilers ahead for BoJack Horseman Season 5. As St. Vincent's "Los Ageless" plays over the opening scene of BoJack Horseman Season 5 and sexy fish dancers entertain a party full of Hollywoo hobnobbers, one thing is entirely clear: Netflix's bonkers sitcom centered on a depressed Horse-Man and washed up TV star has something very pointed up its sleeve (of course, when does it not?). As it turns out, that point is aimed directly at its very own premise and star.

The way in which the season positions its central character as an avatar for Hollywood's obsession with toxic male protagonists would be laughably on the nose if it weren't so brilliant: BoJack finds himself on a career-revitalizing cable series called Philbert, a dark, self-indulgent premium cable show with a tortured male protagonist not unlike True Detective. As we see in the opening scene, Philbert's house is actually just BoJack's. Philbert is a cantankerous alcoholic, burying his feelings under a deluge of secrets and vodka, just like BoJack. Philbert walks through life pretending to feel nothing, also like BoJack. Once our star makes this connection, he spends the entire season trying to escape the fact that he resembles this toxic character, to no avail (but more on that later). At one point, his close friend Diane is hired to make the Philbert script more feminist-friendly and utters the thing most people watching BoJack Horseman should probably have wondered at some point: she complains that Philbert is simply "posing as a deconstruction of the edifice of toxic masculinity, but it's just using that as an excuse to relish in its own excesses."

We know, of course, that the series is better than Philbert, because it's pointing this toxicity out. It's better than Philbert because a sex robot named Henry Fondle, as the CEO of the streaming content site that produces Philbert, sexually harasses his employees and is fired, gets offered another executive job five minutes later because "he's done his time," and is promptly put out to pasture by Todd (Aaron Paul) and his inherent goodness. We know it's better than Philbert because there's an entire episode devoted to skewering Hollywood's penchant for forgiving toxic men — represented by human garbage pile Vance Waggoner, who hits a sex worker with a baseball bat, screams hate speech caught on dash cams, leaves his daughter a voicemail threatening to murder her, and chokes his wife before landing his redemption role as BoJack's Philbert co-star. We know the show is better than Philbert because when BoJack accidentally grimaces during Vince's "Forgivie Awards" acceptance speech and later casually supposes that "choking your wife is bad" on a talk show only to be lauded as a feminist hero for doing the literal bare minimum and then declares that feminism just needed men do the talking all along, Diane is there to scream at the sky along with us.

But the thing is, BoJack, himself, isn't actually better. And the series spends all season leading us to that brutally honest conclusion.

For four seasons, the series has focused on BoJack's depression, alcoholism, and resulting toxic behavior. It's been praised quite deservedly for its extremely realistic, sympathetic take on those struggles (it should be noted that it's also been panned for its use of a white actress, Alison Brie, to voice a young Vietnamese woman, but that's a whole other article). But ahead of the series' fifth season, the industry in which BoJack roamed so freely had changed. While he formerly romped around in a cartoon version of Hollywood, this place has only recently exposed its dark underbelly teeming with toxic males abusing their privilege. Life as BoJack (and BoJack) knew it simply can't go on. We can't just accept BoJack for who he is, as we had for the past four seasons. There are consequences now.

And while our protagonist never previously did anything that quite resembled a #MeToo moment (although for a split second, Season 5 makes us reckon with whether or not he might have back in New Mexico in Season 2), his toxic masculinity has run amok for four seasons. And though the show existed to explore that, dive into it, and excavate it for all its ugliness while serving up causes for its persistence, in the end, the series is still BoJack's, and as viewers, we still root for him. When BoJack finally seems to understand Diane's gripes with Philbert literally as he is mid-defense of the series, he may as well be looking directly into the viewers' eyes as he says with complete sincerity: "You're not supposed to like John Philbert or agree with the things he does. It's a TV show. It doesn't glamorize anything... but maybe it normalizes it."

With that, the series makes a sharp turn away from continuing to normalize BoJack's behavior. It takes the symptoms of his alcoholism and mental health to their darkest places in the final episodes of the season, in which BoJack completely blurs the line between Philbert's life and his own, culminating in a moment in which he violently chokes his co-star while shooting a Philbert scene. But then, despite the video of the scene going public, BoJack moves on without any outward consequences. His co-star denies that the scene was actually violent because, as she secretly seethes to BoJack, she doesn't want her career, her life, and every conversation she ever has in public to be defined by this thing he did to her (maybe something to keep in mind next time someone claims an abuse accuser is doing it "for the fame"). But BoJack wants the story out. He wants to come clean. He wants to feel better. To get past it. To start the healing process so he can get out of this dark place that his own actions have taken him. (And it's certainly not not relevant to a certain recent attempt at redemption.)

So he asks Diane to write an article exposing the truth so he can be held accountable by the court of public opinion. And Diane, our spiritual guide for Season 5, points out that BoJack can't rely on anyone else to fix him or make him feel something — he has to take responsibility for himself. It seems obvious enough, but it's also something BoJack, as the avatar of toxic Hollywood men, has never done. But he attempts to do right and decides to go to rehab in the final moments of the series. Ultimately, it's a good thing, but there's something melancholy weaving throughout the scene, punctuated by Diane's pointed assertion that rehab isn't going to cure him.

But alas, here we are, in the shoes of Diane, reluctant best friend of a wildly toxic horse-man. We've all hitched ourselves to BoJack. We've come along for this ride. And we can't just drop him. We care too much. Plus, the show is literally about him. So we're stuck, feeling invested in what he does next, how he gets out of this jam, how he moves on. Except he can't actually do that. He can't be "fixed." He can't just be redeemed next time we see him. He shouldn't just get to do something horrific and be awarded a phoenix-rising-from-the-ashes moment. But somehow, as Diane drives forlornly along the seaside highway as the dreamily desolate sounds of War On Drugs' "Under The Pressure" close the season out, it also feels like he just might. After all, that's how these things go.