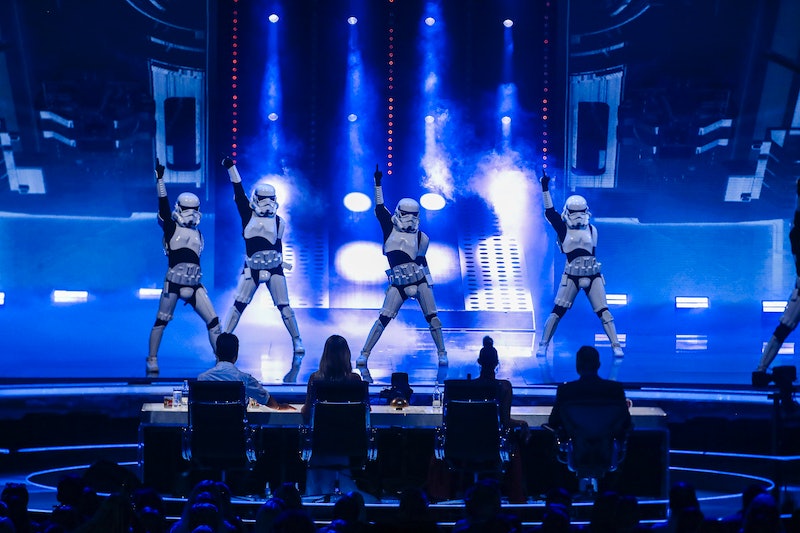 The first ever series of Britain's Got Talent: The Champions has arrived, and some of the biggest names in the show's history will battle it out to be crowned the ultimate BGT winner. Just like the main series, the spin-off will welcome back our favourite four judges, however, the format has been slightly altered to make way for an epic line-up of returning acts. One memorable name coming back to the ITV talent show is the Star Wars-inspired dance act Boogie Storm. But who are the people behind the masks in Boogie Storm?

To jog your memory, Boogie Storm caught the attention of BGT viewers back in 2016 following their dazzling performances dressed as the iconic Star Wars Stormtroopers. According to the Metro, members of the mysterious dance act were eventually revealed, and Liverpudlian firefighter Lee Seddon was unmasked as being the leader of Boogie Storm. As reported by the Liverpool Echo, Seddon formed the group with several dancers from the Jelli Studios in Liverpool — which just so happens to be owned by the former-Brookside star, Jennifer Ellison. Despite forming just a year before their Britain's Got Talent audition, Boogie Storm wowed the onlooking judges with their pop-driven dance routine, and the 2016 contestants clearly made quite an impression, because the dancing Stormtroopers are set to make their primetime return on Britain's Got Talent: The Champions.

According to the Mirror, the creator of Boogie Storm began dancing in the iconic movie costume during various promotional appearances, and inspiration for the idea first arose after Seddon discovered a Star Wars-themed dance clip on Youtube. Speaking of his online discovery, the BGT star said, "That made me think we could get dancers to wear the costumes and go to corporate functions and adult parties as well as children’s."

As mentioned previously, Boogie Storm are set to appear in an all-star edition of the iconic talent series, Britain's Got Talent: The Champions. According to the Radio Times, the acts taking part in the ITV spin-off include the likes of Paul Potts, Connie Talbot, Stavros Flatley, Jai McDowall, and many more. However, Susan Boyle and Diversity, both of whom are arguably the biggest names to emerge from the franchise, will not be appearing in The Champions.

The BGT icons will not take part in the new series due to some unfortunate scheduling conflicts, and speaking to the Radio Times about their absence, one source revealed, "Everyone would love for Susan and Diversity to take part. They are both huge stars and the producers understand Susan and Diversity have commitments. It’s a testament to the success of BGT that both have become so massive and everyone wishes them all the best on their upcoming performances and tours."

According to the Express, the first season of Britain's Got Talent: The Champions will kick off on Saturday, August 31 at 8 p.m. on ITV1, and with the help of judges Simon Cowell, Amanda Holden, Alesha Dixon, and David Walliams, our ultimate BGT winner will be revealed. I can't wait.