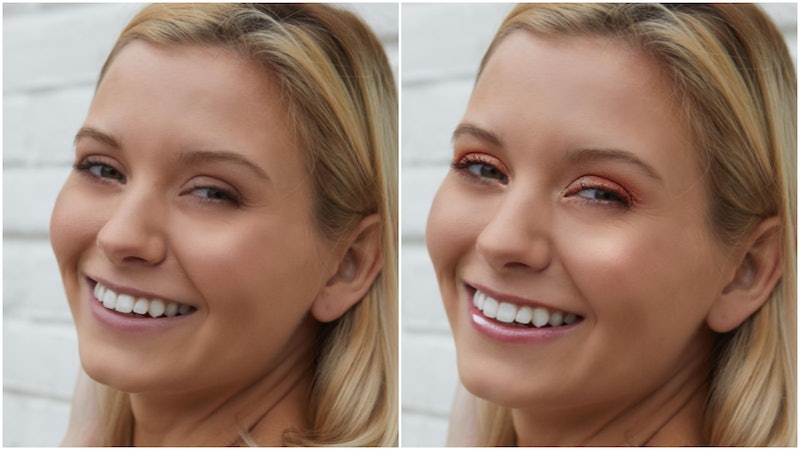 Ever wanted to try on makeup before buying it? There’s an app for that. More specifically, there’s a new collaboration with BoxyCharm and the Facetune2 app coming your way. The union of the two brands will let you experience your monthly BoxyCharm products before they arrive .

Beauty subscription service BoxyCharm and the Facetune2 app are teaming up to deliver BoxyCharm customers a glimpse into its monthly box using the app’s advanced Augmented Reality-Technology. According to a press release from BoxyCharm, this is Facetune2’s first beauty partnership. It will offer an exclusive feature for users to virtually try on products from BoxyCharm’s October Box. Per a Facetune2 representative, users got their first taste of its AR makeup during Pride month, when they could apply rainbow lipstick. However, in partnership with BoxyCharm, users can now virtually experiment with complete looks using eyeshadow and lip products that directly correlate with the subscription’s October goodies.

"Since revealing products before the [BoxyCharm] member actually receives them has been a social media initiative of ours, we know that excitement of receiving the physical box still remains," Founder and CEO of BoxyCharm Yosef "Joe" Martin tells Bustle. "We are expecting that the addition of Facetune’s AR component, featuring the actual products members will be receiving, will add to the positive sentiment and virality that happens in masses at the beginning of the month as well as the conversations surrounding satisfaction about the brand all month long."

Facetune2 will bring you different filter combinations of looks using six shades of the Dose of Colors eyeshadow palettes and three shades of the Iconic London Lip Plumping Gloss that will physically be included in BoxyCharm’s October package. Although Facetune2 is an app that you have to pay for, "Charmers" who subscribe to BoxyCharm's $25/month subscription will be able to receive an exclusive 33% discount for an annual subscription to Facetune2 with this link code.

BoxyCharm plans to preview the AR version of its highlighted products during the brand's BC In Session event being held in Los Angeles on Oct. 12. On the bright side, if you're already a subscriber to both brands, you can already update your Facetune2 app to try the new lip and face features. And this is only phase one of the collaboration. Martin also explains that BoxyCharm hopes to continue working with the Facetune2 to expand into more product try-on options.

In total, Facetune2 offers up different looks with the preset filters provided in the application: Marvelous Mauves, a soft glam purple combo; Blushin Berries, a bold eye with soft glossiness; Pretty Cool, a date night look; and Sassy Siennas, a fiery eye moment. Although you can't customize lip and eyeshadow combinations, the app does the work of coming up with wearable looks for you if you're not sure where to start.

While there are a ton of apps with filters that let you try on makeup, BoxyCharm is allowing fans to play with some of their monthly goodies before it's even in their hands. And something this nifty and high-tech is just another way to save on time in the morning.