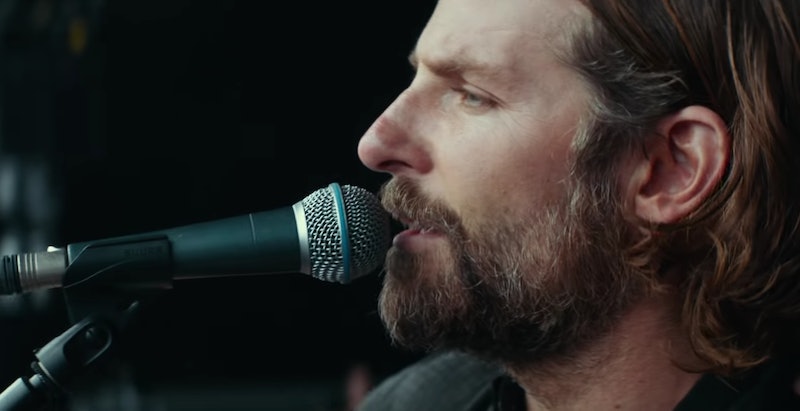 On Oct. 5, Bradley Cooper and Lady Gaga's movie A Star Is Born hits theaters, and it's bound to be a cinematic highlight of 2018. Not only does it serve as Lady Gaga's first starring role in a movie, but it also debuts Cooper's singing voice. While it's obvious that's it's Lady Gaga's voice behind all of her character Ally's vocals in the movie, it's valid to wonder if Bradley Cooper is really singing in A Star Is Born. But not only is the actor/writer/director singing as Jackson Maine, he's singing live, according to comments he made at the Tribeca Film Festival, per Vulture.

The back story behind A Star Is Born mirrors a lot of aspects of the movie's plot itself. No, Bradley Cooper isn't a tortured has-been rock star facing a midlife crisis, but he did sort of uncover a talent of Gaga's like his character, Jackson Maine discovers Ally. That's not to say that Cooper discovered Gaga, of course, nor was A Star Is Born actually Gaga's first foray into acting, but both stars have said in numerous interviews that they leaned on each other for encouragement while trying new things. While Cooper helped Gaga utilize her acting chops, Gaga encouraged Cooper's singing.

In the September issue of Vogue, Lady Gaga told the story of the first time she and Cooper sang together. Gaga recalled saying, "'Oh, my God, Bradley, you have a tremendous voice.'" Then, the "Million Reasons" singer told the magazine, "He sings from his gut, from the nectar! I knew instantly: This guy could play a rock star. And I don’t think there are a lot of people in Hollywood who can. That was the moment I knew this film could be something truly special." According to Vogue, Cooper trained with a vocal coach and a piano teacher for a year and a half to prepare for the role. Based on Gaga's reaction to hearing him sing, it sounds like the Silver Linings Playbook star has a true gift.

While Cooper may have the raw material to play a singer, it sounds like Lady Gaga played a big part in helping him portray Jackson Maine authentically. Seeing as she's a major pop star and all, you might say that Cooper had the best coach he could get. During a conversation with Robert De Niro held at the 2018 Tribeca Film Festival, Cooper said, "[Lady Gaga] said right from the beginning that this is going to be a barter: ‘I’m gonna rely on you to get a performance out of me, and I’m gonna make sure you’re going to be a real musician.'"

Not only did Lady Gaga set out the ground rules for coaching each other on set, but the singer also made another non-negotiable request: that all songs from the movie be recorded live. That means there would be no lip-synching and re-dubbing the studio-recorded songs later. It also meant that Gaga and Cooper had to perform at real life music festivals, which they did at the Stagecoach country-music festival in Indio, California and the major Glastonbury Festival in England, per Vogue. Cooper went from never having sang in front of anybody to singing in front of massive crowds — thanks to Lady Gaga, Cooper told Vogue. "She really gave me the confidence," he said.

In some ways, the fact that Cooper and Gaga stretched themselves out of their usual comfort zones for A Star Is Born helps the movie's overall vibe. The film tells the same story that the three prior versions, first with the 1937 film then the 1954 musical and then the 1976 rock musical which starred Barbra Streisand and Kris Kristofferson. In each of the versions of A Star Is Born, the excitement of a newly discovered talent reverberates through the story, and in the new one with Cooper and Gaga trying new things, it's even more effective.

More like this
Lashana Lynch’s 'Woman King' Training Was “Traumatizing” For A Relatable Reason
By Radhika Menon
An Extremely Messy Ranking Of What Actually Happens In 'Don't Worry Darling'
By Chloe Foussianes
Paul Mescal, Man Of Mystery
By Samantha Leach and Heather Hazzan
Florence Pugh Reflected On Her ‘Don’t Worry Darling’ Experience On Opening Day
By Brad Witter
Get Even More From Bustle — Sign Up For The Newsletter