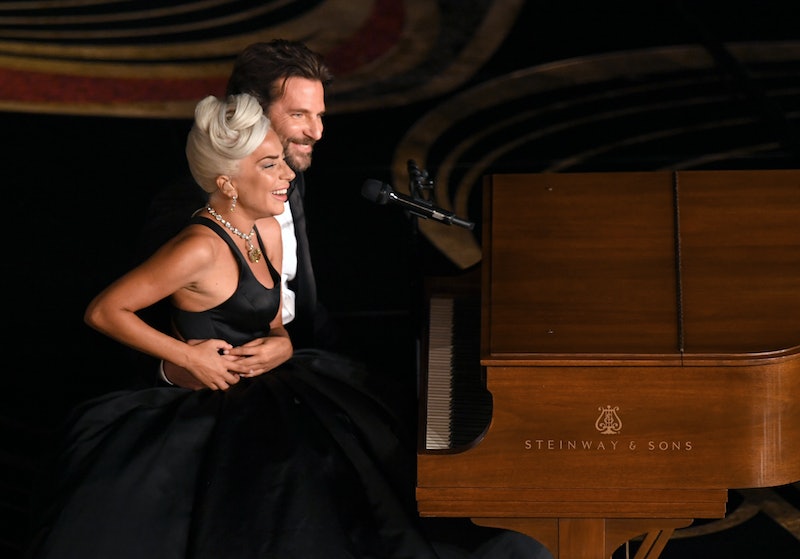 Sadly, A Star Is Born couldn't stay in theaters forever. Now months after it's initial run, and Oscar nominations, Bradley Cooper and Lady Gaga's musical movie is, unfortunately, now only never happen, but if director Cooper gets his way, a one-night-only live event may be in the cards. Bradley Cooper wants to reunite with Lady Gaga for a Star Is Born live concert, as he said during an appearance on The Ellen DeGeneres Show, which aired on Thursday, April 25.

During her show, Ellen DeGeneres asked if Cooper would take A Star Is Born out on tour due to the resounding success of the film and its soundtrack. “I mean, no,” he answered, immediately breaking the hearts of millions around the globe. But he did give fans a sliver of hope that A Star Is Born could still be brought to life on stage, even if it’s just for one night only.

"What I thought would be a cool thing to do is, one night, is a live reading of the movie, of the script, and sing all the songs as you're reading the script, like at the Hollywood Bowl or something,” he explained on the show. “That would be cool, right?,” to which millions of Little Monsters responded with a resounding “yes”.

However, the talk show host’s audience didn’t react that rapturously, surely out of shock rather than disapproval, making Cooper suddenly nervous about his idea. “They didn’t respond so you’re like, ‘No’?” DeGeneres asked. “I was just testing it out,” Cooper joked. “No, we won’t do it. Horrible idea.” Speaking for the entire audience, and practically the entire Internet, DeGeneres concluded, “They would love that, they just didn’t know what to react like.”

If Cooper has any hesitation about bringing his film to stage, he shouldn't worry a bit. The director has already performed the film's Oscar-winning hit, "Shallow," with Lady Gaga live twice, once during her Las Vegas residency show Enigma, and most significantly, at the 2019 Academy Awards, where Gaga walked away with the Oscar for Best Original Song. On both occasions, the pair was met with rave reviews from fans, along with endless viral memes and romance speculation. This is the Internet, after all.

“It just shows if you work really hard and you work with supportive people, anything is possible,” Cooper said about his Oscars performance during the interview. “I thought, people will never watch the movie again if this is bad. So it had to be great.” Despite his nerves, their performance went on to become the standout moment of the 2019 Oscars. Even DeGeneres herself remarked that it was the only thing about the awards show that she could remember.

Given that the actor is now a Grammy-winning singer with a number one song on the Billboard Hot 100, it's evident that the public would definitely be interested in seeing him team up with Gaga once again for a live show in any capacity, even just one night at the Hollywood Bowl. We might be "far from the Shallow now," but who's to say we can't revisit?