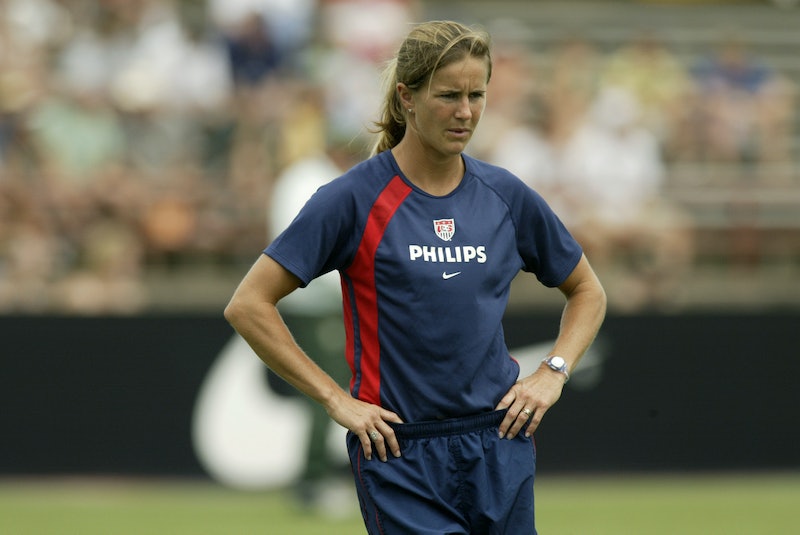 Brandi Chastain may be most famous for her celebration after scoring a penalty kick and winning the 1999 Women's World Cup against China, but she is so much more than just that one goal. After winning two World Cups, two Olympic gold medals, and one silver, Chastain has been inducted into the US Soccer Hall of Fame. Now, she's coaching for the California Thorns Soccer Academy, and working with initiatives like the Allstate All-America program, which recognizes some of the best junior high school soccer players in the country. Speaking with Bustle during her collaboration with Allstate, Chastain discusses how her upbringing and her famous goal made her the soccer player we all know and love.

Growing up, becoming a professional soccer player wasn't actually my goal, but a love for sports and being on a team helped that goal take shape over time. I have to admit that I thought I was going to play in the NFL. My father watched football on TV and my godfather — Swede Johnston — played in the NFL, back in the days when they still wore leather helmets. I loved to play football in the street with the kids in my neighborhood, and nobody told me that I couldn't play football. But when I realized I wasn't going to be six foot five and 300 pounds, I started to consider soccer as part of my future.

My family didn't know anything about soccer — they neither played nor watched nor had been involved. But what my parents did recognize is that they had a very rambunctious, outgoing, outdoorsy young girl, and when soccer came to my neighborhood, they weren't afraid to say, "Hey, let's give it a try."

I think that commitment from my father, along with my mom being at every game with her big, three-foot megaphone on the sidelines cheering for every player, gave me a support system that allowed me to grow, fall down, and get up.

After signing up for the team, I honestly believed it was love at first kick. I don't remember a day when I didn't get excited to go to practice or my parents weren't involved. My dad became my first coach, even though he didn't know anything about soccer. We would go to the library together and would pick out the one or two books that they had on soccer, and we learned about soccer together. I think that commitment from my father, along with my mom being at every game with her big, three-foot megaphone on the sidelines cheering for every player, gave me a support system that allowed me to grow, fall down, and get up.

I had one notable moment in my soccer career when someone told me no. I was in middle school and I went out for the co-ed soccer team, but when myself and a few girls came to the tryout, the coach looked at us and said, "What are you doing here?" We told him we were there to try out for the team, and he said, "Well, it's not really for you." A few of our friends who were boys then stood up to the coach and said, "Coach, they're really good. You have to see them play." They swayed his perspective to finally let us try. We wound up making the team and it helped me learn that there are advocates everywhere.

Then, after an experience at summer camp, I began to realize I was meant to be an athlete. At a camp of about 300 boys and four girls, I played on a soccer team and I scored a goal — the crowd cheered and all of a sudden I got this rush that I've never had before. I thought, "Whoa, I'd like to do that again."

Fast forward to 1980 when I was watching the men's U.S. hockey team play in the Olympics and we made our way past the Russians, which should never have happened on paper, and went on to win the gold medal. When they all stepped up on the podium, something happened inside of me. Again, this rush of adrenaline and this patriotism came over me. When they put the flag around all of them, I thought, I want to do that. And again, I didn't know what that meant, but I wanted to be part of this gathering of people toward a collective goal.

At the time, there was no women's national team and there was no World Cup for women, so being a professional soccer player wasn't something that I could even say I wanted to do. I just sought out moments like that in the plenty. It could have been basketball at my school, it could have been high school soccer, or playing with my club team, but I kept searching for these moments.

Then all of a sudden those moments became reality when the national team was formed in 1985. Shortly thereafter I joined the team in the late eighties. In 1999 at the World Cup finals, I experienced the ultimate rush by scoring the winning goal against China. I get asked about that moment a lot because of my now-famous celebration afterward when I took my shirt off, but I think the beauty of that moment cannot stand alone — it was built upon the shoulders of so many women who came before me in soccer and women who were not a part of soccer. Women like Billie Jean King, who showed women were just as talented as men when she beat Bobby Riggs in a tennis match now known as The Battle of the Sexes, for example. That goal came at a time for the women's national team when we were trying to figure out ways to secure a future for the next generation of young women players and young girls who may be aspiring to get involved with sports.

When people think of that moment, they may not think how we got there, or know that celebration was for everybody. What happened subsequently after was that doors that had been closed to women in sports and soccer specifically, were now open to us in ways that I don't think we could have imagined. It really brought our sports family — and that's men and women — closer together. Every time I met a male professional athlete after that game, the response I got from them was so incredible and so positive. When you get that kind of feedback, you know that you're included.

As told to Kristin Magaldi, and edited for length and clarity.