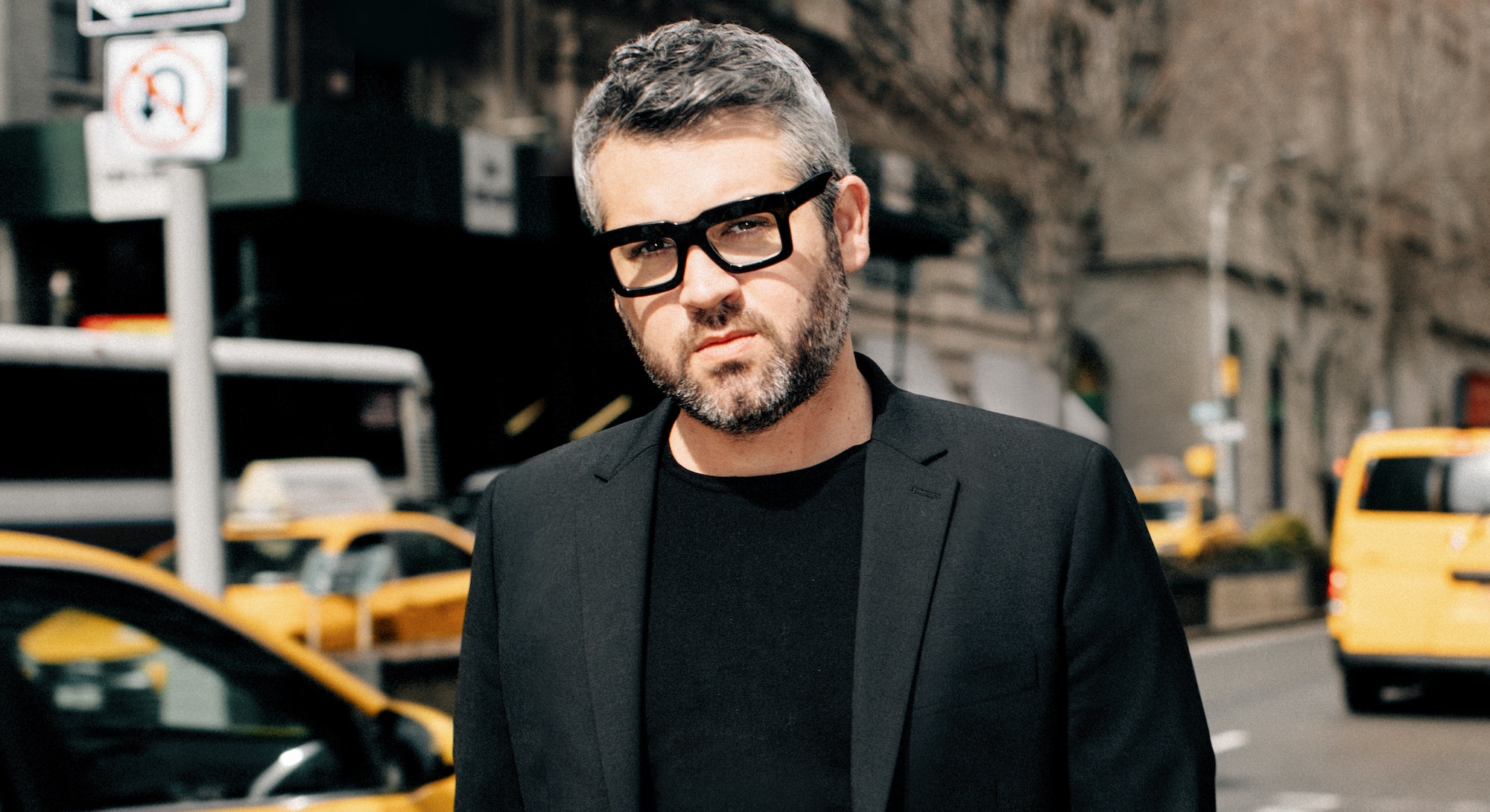 At 35 years old, luxury designer Brandon Maxwell already has a profusion of prestigious accolades under his belt, including the 2016 CFDA Swarovski Award for Womenswear and the 2016 Fashion Group International Rising Star Award for the same category. But when we met in New York City in early spring, it became clear that Maxwell — who's wearing a chic, all-black suit with bold, colorful sneakers — just thinks of himself as a regular guy.

Before this shoot, the designer immediately greets me with a warm hug and a big smile, rather than the typical handshake. Then, he politely introduces himself to me, and asks how my day is going before I had the chance to ask him anything at all. As we sit down to begin our conversation, Maxwell's laid-back vibe, kind nature, and humility almost makes me forget that the person sitting before me had dressed some of the most influential women of all time, namely Oprah, Meghan Markle, and Michelle Obama. But he's not wrapped up in their fame. "I'm really drawn to women who are trying to make a difference," he tells Bustle, while sipping a Diet Coke. "Whether it’s in a small way, in the way that they can, or in a big way."

Maxwell himself is making quite a difference in the world as well. Beyond just creating genuinely inclusive runway shows and having curvy, women of color — a group that's long been shunned from the mainstream fashion world — like Octavia Spencer, as his muses, Maxwell has long used his platform to encourage empathy, honesty, and kindness. These traits, while they may seem simple to embrace, have arguably become a rarity in a world where compassion has often been replaced with cut-throat cancel culture, especially in an industry as harsh as fashion. However, the craftsman hasn't felt the need to be cruel in order to make his way to the top — and it's likely because he's the type of designer who's not concerned with centering his work around himself, or his ego. Instead, his priority has always been to make women feel their best.

Born in Longview, Texas in the mid-'80s, some of Maxwell's earliest memories are of perusing his grandmother's clothing boutique as a young child. "I literally grew up under a clothing rack," he recalls. But even as a kid, these precious moments were not ones the then future designer took for granted. When his grandmother would put together outfits to dress her clients, Maxwell would carefully examine her every move — noting what items she would match with a particular pair of shoes, or a specific type of accessory. "I really learned how to be a stylist in that environment," the designer says.

As he grew older, he began to put these learnings to practice, using one of his sisters as his first muse. "I would strip my parent’s bed of their sheets and have her stand there and drape dresses on her," he remembers, adding that he eventually would go on to help all of his sisters get ready for school in the morning. "I loved that moment of making somebody feel seen and special."

From there, Maxwell recognized that he had an innate desire to work in fashion, which led him to move to New York City for college in 2003, but he soon had to return to Texas. "I didn’t do very well in school, so my parents made me go back home," he says, laughing. But after graduating on the dean's list the second time around — when he completed the photography program at St. Edward's University in Austin — Maxwell returned to New York in 2009, eager to chase his lifelong dream.

Maxwell quickly dove into the work of editorial styling once he arrived, landing his first gigs with industry veterans Deborah Afshani, Edward Enninful, and Nicola Formichetti. But although the Texas native didn't gain any formal design training during this time, it was Formichetti who would encourage Maxwell to start his own women's luxury line, which would take his career to new heights.

When the eponymous brand came to fruition in 2015, Maxwell's perennial designs, which debuted at spring 2016 New York Fashion Week, instantly captivated the fashion world; with Vogue writing that his first collection "truly nailed it." But the influx of praise, while well-deserved, was still surreal to Maxwell. "I definitely suffered from imposter syndrome," he admits. "It all [happened] very fast." But despite his rapid rise to success, he also wants to make it wholly clear that he is not without imperfections. "I am extremely flawed," he admits. "I have days that are successful and I have days that are massive failures — and those are both fine."

Maxwell's quick rise to prominence could likely also be attributed to the fact that he's believed in the importance of diversity since the beginning. The designer has made this clear through having models of color be the focal point of his shows, featuring his beloved grandmother in his ad campaigns, and creating luxury clothing for a variety of shapes. "From day one I’ve sold to a size 24," he says (plus size versions of his designs can be found on 11 Honoré). "There’s also so many women in my shows who are are a size 8, or a 6 — a whole group of women in the middle ground that everybody forgets about. I think we ought to be having that conversation, too."

It's clear that not every designer has this same mindset, however; especially considering that diversity, or lack thereof, has been a hot topic in fashion for years. "I think some of them do not have the desire," he says. However, for others, it has nothing to do with poor intentions at all, Maxwell explains. Rather, he shares, that for some luxury brands, creating clothes of all sizes can come at an exorbitant cost, especially to show on the runway. "Sometimes you’re doing 10 or 12 pre-production samples," he says. "If that blazer, for example, is $2,000, you can end up spending $24,000. If you’re a young brand that doesn’t have money like that, that could bankrupt you."

But regardless of finances, Maxwell's paramount belief when it comes to this craft has always been about prioritizing the client's confidence; something he thinks all womenswear designers should champion. "At its core, our job is to service women," he says. "Doesn’t matter where they come from, what their job is, what they look like, how they act — our job is to make them feel good. If you have a problem doing that, with any type of woman, then you should not be doing this job."

Most recently, Maxwell was asked to join the cast of the revamped Project Runway, which now airs on Bravo. "The whole time I was just like, 'They must have called the wrong person,'" Maxwell remembers, going on to share that he even felt a little insecure about being in front of the camera. Plus, he wanted to make sure that no matter what, he could stay true to himself. "The first thing I said to [the producers] was I have no interest in being mean," he explains. "And they never asked me to be anything other than who I was on any given day."

But as much as the up-and-coming designers learned from his compassionate critique throughout each episode, Maxwell says he has also learned a lot from them, especially when it comes to resilience. "One of the women on the show has nine children ... we have a Syrian refugee, we have young people who are still in school, who still are looking at themselves deeply in the mirror saying, 'Who am I?'" Maxwell details. "The choice to do that on national television in front of people — there is a strength and a fire in those people that I don’t possess."

The designer also speaks quite highly of one woman, in particular, featured on the show: MiMi Tao, who is the first transgender model to ever appear on Project Runway. "I can’t remember a previous episode where I’ve had that sort of deep emotional connection to the model," Maxwell reveals. But Tao seems to understand just how important her presence on a major fashion television show is, too. In the first episode, she elucidates how much harder she's had to work in order to be seen as equal to her cisgender counterparts. "I get chills just thinking about it," Maxwell adds. "She hopes this will knock down a door."

As a man who has accomplished incredible feats in fashion in such a short amount of time, the sky itself is certainly not the limit for Maxwell. While personally, he's looking to get married and start his own family in the near future, as a brand, his hope is to take it beyond just clothing. But even though he's not quite sure what form that journey would take just yet, Maxwell shares that his ultimate goal is to help create more spaces for all types of women to feel safe, comfortable, and of course, beautiful in their own skin — whether that be through creating inclusive film, television, or book projects. "I think my career has been an exercise in putting the pieces together and building a world as I now want to see it," he says. After all, "Why do any job if you’re not going to leave it better than how you found it?"