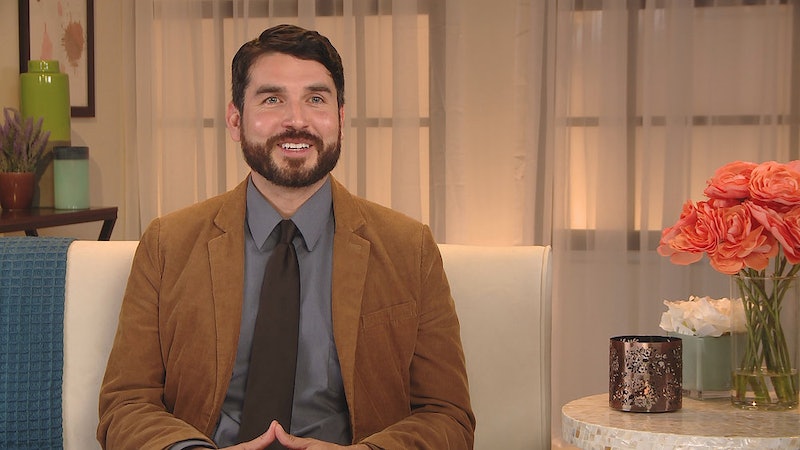 Imagine seeing your ex again for the first time in a year. Imagine spending a full day and night in a private room with them. Imagine all of that being aired on national television, and bam! You've got Bravo's new show, A Night With My Ex, which premiered July 18. As you can imagine, enabling two exes to publicly rehash their relationship could probably produce enough cringeworthy moments to last a lifetime, but the awkwardness is what makes A Night With My Ex feel authentic.

Rather than have producers and camera people present in the room, as most other reality shows do, A Night With My Ex has cameras rigged up around the apartment already, giving the couple privacy. Or, I mean, as much privacy as you can have when every moment of your day is being filmed. The couple are then left entirely to their own devices, and in the show's premiere, things got awkward fast.

The first pair to undergo this experiment, Fabian and Rachel, had a lot of issues to work through. Fabian cheated on Rachel after four years of dating, because she was waiting for marriage to have sex and he was "sexually frustrated." He hooked up with a girl dressed as Tinkerbell for Halloween, and his relationship with Rachel was toast. Yikes.

Since there are no producers to dictate the conversation or activities, things between Rachel and Fabian flowed in a way that felt organic, if still totally cringeworthy. Allowing the conversation to take its own course made for a few authentic moments between these exes, such as when Rachel shared that she'd never had an orgasm with Fabian and suggested he learn more about the clitoris.

Even though this was seriously painful to watch, it was refreshing to see female pleasure talked about explicitly on screen between a real-life couple who struggled in that area. When so many women have trouble achieving an orgasm, it's important that talking about it becomes de-stigmatized. I doubt that Rachel would have felt as comfortable bringing this issue up if there had been a hoard of producers standing around in the room with them.

The only clear producer interference throughout the episode was a stack of cards left on the coffee table, which contained questions that the couple could ask each other. But even this felt like a gentle way of coaxing the couple into addressing deeper issues that they might have been too scared to bring up without being prompted. The conversations that followed felt way more real than most conversations you see on reality TV. At one point, Fabian asked Rachel if she was still a virgin, and Rachel shot back that he would have no right to be upset if she wasn't. (You tell him, girl.) It was refreshing to see emotions and conversations emerge that felt real, if not always articulate.

The episode ended on a bizarre note, when Fabian decided to propose (what?) to Rachel, and she rejected him. But even though things didn't work out between this couple, it still seemed as though the process of rehashing their relationship had been cathartic for both parties involved. Honestly, it was cathartic just to watch. When the reality TV genre is dominated by the picture-perfect Kardashians and the fairytale romance narrative of The Bachelorette, A Night With My Ex is a reminder that real-life relationships are messy and complex, and our TV should work harder to reflect those realities.

Although the concept of the show is a little nuts — I mean, who wants to air their dirty laundry with their ex on national TV? — A Night With My Ex has the potential to be one of the realest shows on television.