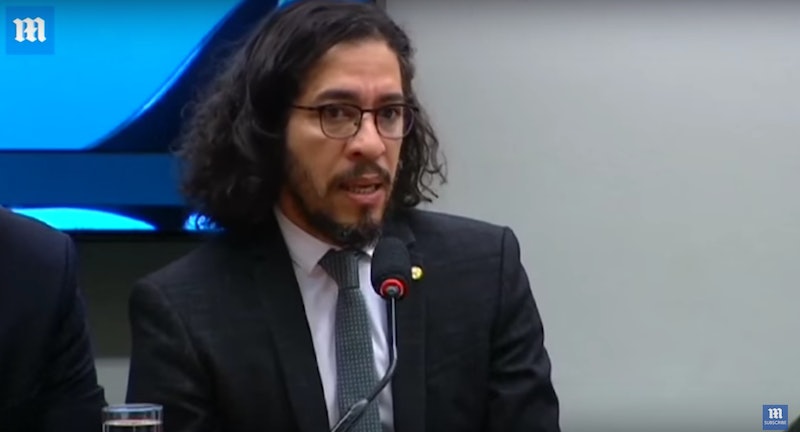 In response to death threats and a general political atmosphere of homophobia in his home country, Brazilian congressman Jean Wyllys, who is openly gay, left his job and the country, and isn't coming back. Wyllys, the only out member of Brazil's parliament, confirmed his self-imposed exile on Thursday to the newspaper Folha de São Paulo, weeks after virulently anti-gay politician Jair Bolsonaro was sworn in as president.

Wyllys, who rose to fame as the winner of Brazil's version of Big Brother, was just elected to his third term in parliament in October. But he said that he's received death threats, and told Folha de São Paulo that he doesn't "want to live four years of my life in an armoured car with bodyguards."

Bolsonaro is overtly homophobic, having said that he'd rather his son die in a car crash than come out as gay and that if he sees "two men kissing each other on the street, I’ll beat them up," according to the Associated Press. However, Wyllys said that it wasn't Bolsonaro's election that compelled him to leave, but rather, the increase in violence towards LGBTQ Brazilians that the country saw during Bolsonaro's campaign. According to the Guardian, Wyllys was friends with Marielle Franco, an openly gay city councilwoman in Rio de Janeiro who was assassinated in March.

"It was not Bolsonaro's election itself," Wyllys told Folha de São Paulo. "It was the level of violence that has increased since he was elected."

According to the Guardian, Wyllys said that he made his decision after learning that Bolsonaro's son Flavio had hired relatives of Adriano Magalhães da Nóbrega, the alleged leader of a death squad called Escritório do Crime, which prosecutors suspect of killing Franco. Flavio was just elected to the country's Senate, while Nóbrega is reportedly in hiding.

Bolsonaro was a congressman for 28 years before being elected president, and has made many sexist and bigoted statements throughout his career. According to the Guardian, he once told a female lawmaker that "I'm not going to rape you, because you're ugly," and said that quilombolas, black Brazilians who descended from slaves, are not "not even good for procreation." Bolsonaro also said that his fifth child was female because he had "a moment of weakness."

In addition, Bolsonaro has made several anti-democratic comments and explicitly supported the killing of political opponents. He's said that he is "pro-torture" and during the campaign, that he would only accept the election results if he won. Bolsonaro also insisted that "you won’t change anything in this country through voting," and that "you’ll only change things by having a civil war and doing the work the military regime didn’t do."

The BBC reports that members of Wyllys' party, the Party for Socialism and Liberty, say that he'll be replaced in parliament by David Miranda, another openly gay man and member of the Rio city council. Miranda is the husband of American journalist Glenn Greenwald.