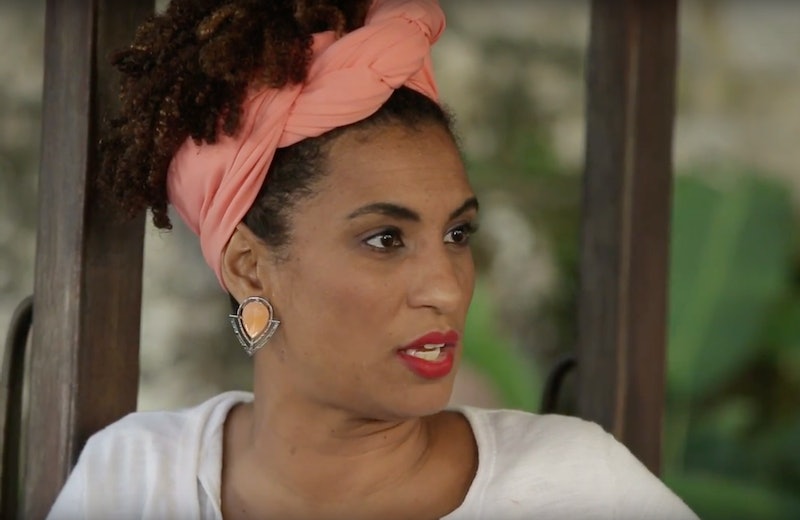 A black councilwoman in Rio de Janeiro who was popular for her advocacy about police brutality was shot dead Wednesday night in what appeared to be an assassination, local law enforcement said. Marielle Franco was killed in Rio while driving back from a black women's empowerment event. Police are opening an investigation into her death, and political outrage is already growing.

On the night of her murder, 38-year-old Franco attended and live-tweeted a panel of young, black female speakers about creating more structural opportunity for black women. She left the event with a press officer and her driver, Anderson Pedro Gomes. In the middle of their drive, two men in a separate vehicle reportedly approached and shot a gun into their car nine times. Franco and Gomes were killed. The press officer, who sat in the back, survived.

"It's staggering, and a chilling reflection about Brazil today, that they thought they could do this with impunity," journalist Glenn Greenwald said on Thursday.

Federal law enforcement said that it is beginning an investigation into the attack. Amnesty International urged the necessity of identifying the "the context, motive and responsibility" for the murder.

On Thursday, #JustiçaParaMarielle — "Justice for Marielle" — was trending on Twitter. Demonstrations were planned in several Brazilian cities to protest her murder and call for justice.

Franco, a sociologist, was elected in 2016 as part of the leftist Socialism and Liberty Party (PSOL). During her time on the council, she introduced bills that would have initiated advocacy campaigns about sexual violence and the incarceration of black youth.

Franco also devoted much of her career to opposing police brutality and trying to improve the conditions of Brazil's favelas, or low-income neighborhoods. She herself grew up in a favela in Maré, a region in northern Rio. One of her achievements as councilwoman was organizing a large event called "Right to the Favela" featuring workshops and debates about education, sanitation, and other issues facing those communities in Rio.

Shortly before her death, Franco criticized the way that police officers treat favela residents, calling out their rough and violent behavior while performing searches. She also spoke out against President Michel Temer's decision to send military troops to Rio to contain escalating violence there.

Franco won her race with a 46,000-vote margin in a country that is known for having particularly poor rates of female representation in politics; when she was elected, she became one of only six women on Rio's 51-person city council. Her identity as a black woman is especially notable as Brazil continues to struggle with racial inequality. Brazilian singer Elza Soares identified Franco as being part of the LGBT community, too; as a council member, Franco attempted to institute a lesbian visibility day in Rio.

Greenwald wrote a tribute to Franco on Twitter after her death:

Every now and then you meet someone in politics that makes you believe that the whole thing is worth it, despite all the dirt and decay and corruption that drowns it, that it can actually improve things for people. @mariellefranco was one of those people - for so many.

Franco herself was both skeptical and optimistic about government and the potential of politics to improve people's lives. Her 2016 entry into the council was her first bid to enter the political world after years of being an activist. "The State is the main violator [of our rights] but it is also a principal means by which our rights can be obtained," she told New Internationalist earlier this year.

In the wake of her death, one of Franco's recent tweets went viral. Responding to the recent death of a black man at the hands of police — Matthew Manu was killed on his way to church — Franco wrote, in Portugese, "How many more will have to die for this war to end?" Many now see Franco as yet another martyr in Brazil's fight for social justice.