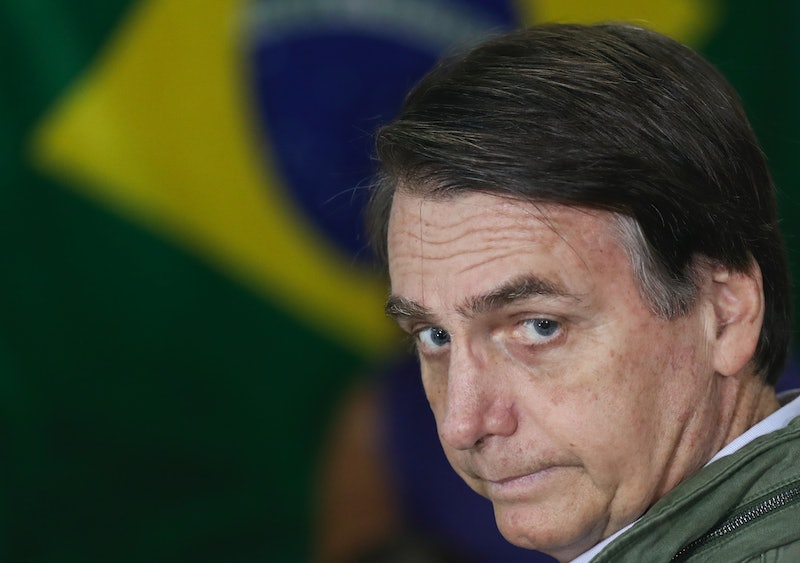 In January of this year, Jair Bolsonaro became Brazil's newest president and, since then, his administration has proposed some sweeping policy changes. Namely, the president has suggested that Brazil's textbook references to LGBTQ and feminist movements might get scrapped completely. These potential changes could profoundly impact what Brazilian schoolchildren learn about in their classrooms.

As The Independent reported, Bolsonaro's administration made moves to change the country's school curriculum almost immediately after the president's inauguration. The outlet noted that, in January, Bolsonaro's Education Ministry released a new series of guidelines for the country's textbook publishers, which indicated that there should no longer be references to issues like sexism and violence against women in new textbook publications. At the same time, the ministry also disbanded its diversity department, The Independent revealed.

The Associated Press (AP) reported that, after significant public pushback, the Education Ministry eventually retreated from these recommendations. In doing so, the ministry asserted that the guidelines had been created by the previous administration and were accidentally published, the AP Noted. However, the outlet added that Education Minister Ricardo Velez Rodriguez said in his first speech as minister that he was committed to stopping the “aggressive promotion of the gender ideology" and to promoting what he believes are traditional values.

Despite the administration backing away from the new guidelines, Women in the World suggested that Bolsonaro's rhetoric and actions indicate that his administration likely still plans to make changes to the country's curriculum. Indeed, as the outlet indicated, Bolsonaro declared in a YouTube video that he wanted to remove questions on LGBTQ and gender movements from the country's national high school exam.

As the AP described, the president's YouTube comment came after he had reviewed a question from last year's national high school exam which asked about a “secret dialect used by gays and transvestites," called Pajuba. According to the outlet, Pajuba is used by Afro-Brazilian religious communities as well as by the Brazilian LGBTQ community. During the aforementioned YouTube video, President Bolsonaro said to audiences, "Don’t worry, there won’t be any more questions like this," The Independent noted. Notably, as The Hill reported, back in January Bolsonaro also removed LGBTQ concerns from being considered by a newly-created Brazilian human rights ministry.

Bolsonaro has also suggested that, in addition to curriculum changes, he hopes to change how some schools are run. Indeed, as The Independent reported, the president has proposed having the military take over the leadership of some public schools as a means of countering what he called "Marxist rubbish." As Bolsonaro described in a tweet on the day after his inauguration (via Voice of America):

One of the goals to get Brazil out of the worst positions in international education rankings is to combat the Marxist rubbish that has spread in educational institutions.

Amidst Bolsonaro's rhetoric about potentially changing Brazil's curriculum, it's not yet clear if and when these changes will be made, The Independent reported. “We are still waiting to see how, in practice, all this is going to turn out,” Nilton Brandao, president of one of Brazil’s largest teachers’ unions, told PROIFES Federacao (via The Independent). “Right now, it does not make any sense.”