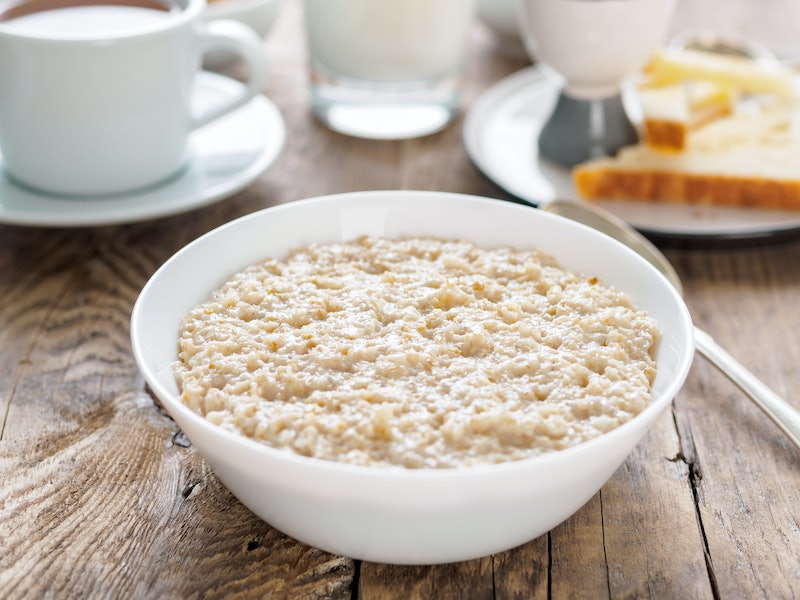 Nonprofit organization the Environmental Working Group (EWG) claims that trace amounts of a common weed killer, Roundup, were found in 28 samples of oat-based breakfast cereals. Mic reports that the EWG published a preliminary report this past August that revealed traces of weed killer in common breakfast foods and snack bars. The current report now confirms the EWG’s previous findings.

According to CNN, the EWG found that 26 out of 28 tested breakfast products, made by Quaker and General Mills, contained Roundup’s active ingredient, glyphosate, at levels “higher than what EWG scientists consider protective of children’s health,” per the EWG report.

CNN reports that manufacturers dispute the EWG’s guidelines for safe glyphosate levels. A spokesperson for General Mills tells Bustle in an emailed statement:

Most crops grown in fields use some form of pesticides and trace amounts are found in the majority of food we all eat. Experts at the FDA and EPA determine the safe levels for food products. ... The extremely low levels of pesticide residue cited in recent news reports is a tiny fraction of the amount the government allows. Consumers are regularly bombarded with alarming headlines, but rarely have the time to weigh the information for themselves. We feel this is important context that consumers should be aware of when considering this topic.

Quaker tells Bustle in a statement that glyphosate is commonly used by farmers, and that the company thoroughly cleans the oats once they receive them: "Any minimal levels of glyphosate that may remain in finished products where oats are an ingredient are significantly below regulatory limits and well within compliance of the safety standards set by the Environmental Protection Agency (EPA), the California Office of Environmental Health Hazard Assessment, Health Canada and the European Food Safety Authority (EFSA) as safe for human consumption."

Quaker's statement continued, "The EWG report artificially creates a 'safe level' for glyphosate that is detached from those that have been established by responsible regulatory bodies in an effort to grab headlines, and has the potential to falsely alarm consumers, leading them to avoid consumption of many oat-based foods that are proven to be beneficial for the human diet. We believe EWG’s approach is invalid, and we stand behind our statement that the Quaker products tested by EWG are safe."

Glyphosate, one of the mostly widely used herbicides in the world, according to the EWG, is classified by the International Agency for Research on cancer as “probably carcinogenic” to humans. CNN notes that the EWG uses a “more conservative benchmark” than manufacturers do when it comes to measuring glyphosate levels. While none of the foods exceeded limits set by the Environmental Protection Agency (EPA), and manufacturers say that they are safe for human consumption, the EWG says that these trace levels of glyphosate exposure can contribute to cancer with long-term consumption.

Currently, there is no consensus among various agencies regarding safe levels of glyphosate, Mic reports. While the EWG uses 160 parts per billion as its health benchmark, the EPA uses 30 parts per million or glyphosate in oats and other grains.

“EWG’s health benchmark is much more protective than the EPA’s level, specifically to protect children’s health,” Tasha Stoiber, senior scientist at EWG, told Mic in an email. “Since children have an increased susceptibility to cancer-causing substances, it’s standard scientific practice to a 10-fold margin of safety when setting recommended safe limits. This practice is also supported by the federal Food Quality Protection Act,” Stoiber said.

Many experts warn that widespread and long-term glyphosate exposure in the diet can lead to health problems, per CNN. But while the debate continues as to whether or not glyphosate poses any long-term risks to consumers, you can lower your exposure by consuming pesticide-free and organic foods whenever possible, if you have any concerns about exposure.

Update: This story has been updated to include a statement from General Mills.

More like this
Got Brain Fog? Here Are The Best Supplements For Memory & Cognition
By Carolyn Steber
Why TikTok Is Obsessed With Caesar Salads Right Now
By Alexis Morillo
Twitter Is Still Reeling Over 'Bake Off's Surprise Competition Twist
By Bustle UK
TikTok's Butter Board Might Be The New Cheese Plate
By Emma Carey
Get Even More From Bustle — Sign Up For The Newsletter