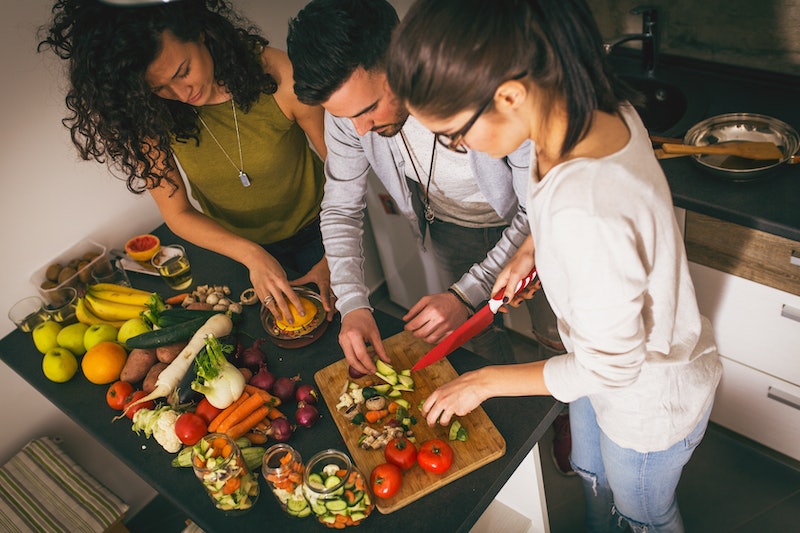 We all know that our eating patterns can have a huge effect on our health, but a new study has shown that the timing of your meals may influence your health, too. And for women, the study has a particular importance — because eating dinners late may be linked to higher incidences of breast cancer. The study, from the Barcelona Institute For Global Health, looked at people in Spain over a five-year period, from 2008 to 2013, and found that people who ate dinner before 9 p.m. or left at least two hours between eating and going to bed were less likely to experience breast or prostate cancer.

The researchers looked at how patterns of cancers and tumors lined up against eating habits in the evening — specifically, how eating after 10 p.m., or less than two hours before sleeping, affected the subjects' risk of developing cancer. And the researchers found that people who ate later and left less of a gap between eating and sleeping were more likely to develop breast or prostate cancer than those who had their dinner at an earlier hour and left at least a two-hour gap before hitting the hay. This is particularly notable as people in Spain tend to eat dinner far later than people in other countries.

The lead scientist, Manolis Kogevinas, explained in a press release, "Our study concludes that adherence to diurnal eating patterns is associated with a lower risk of cancer. [The findings] highlight the importance of assessing circadian rhythms in studies on diet and cancer." But why should what time you eat and sleep affect your body's relationship to cancer?

This research is part of a bigger picture. Science has actually already established that messing up bodily rhythms regularly, like working night shifts, can increase the likelihood of developing cancer and other serious diseases. A study earlier in 2018 found that female shift workers with irregular sleeping and eating schedules faced higher risks of breast, skin, and gastrointestinal cancers. It actually raises their risk overall by 19 percent. Humans have an internal clock known as a circadian rhythm which regulates how we sleep and how our metabolic processes work. The circadian rhythm involves a huge set of different bodily processes, including hormones and insulin levels, and an eating and sleeping cycle that falls outside normal patterns can be pretty damaging to it.

The scientists from the Barcelona study suggested a lot of different factors that can be disrupted by eating late and sleeping later, such as insulin and cortisol levels. And, importantly, they point out that people with unsettled circadian rhythms also have higher levels of inflammation. Inflammation, the body's healing response to threats, has been identified as a risk factor for all kinds of cancers. The organization Cancer Research UK notes that "it’s clear that fledgling tumours [sic] hijack inflammation and use it to accelerate the progression towards full-blown cancer."

All this being said, however, it's important to remember that this is just one study, and that the occasional late night dinner — or late night snack — isn't going to affect your risk of cancer all that much. Being mindful of leaving time between eating and going to sleep on the regular, though, could help your body function in tip-top shape.