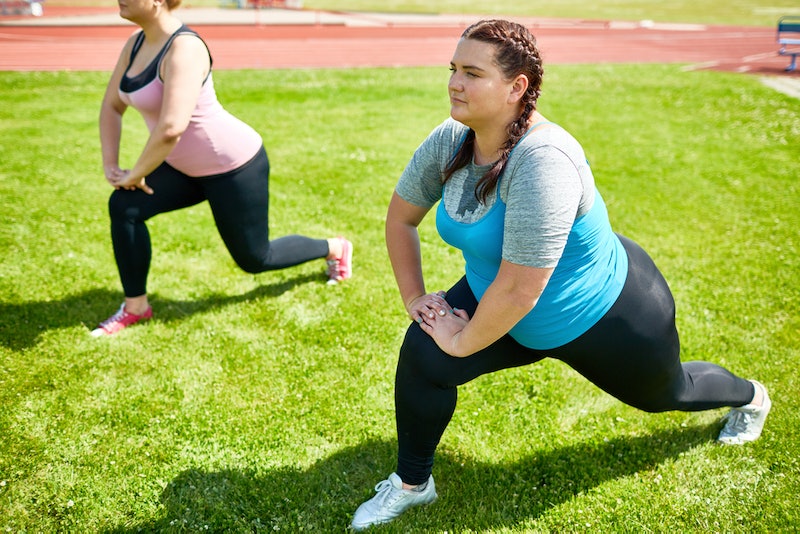 Thankfully, talking about breasts is no longer the taboo it once was, but having breasts isn’t always the most comfortable experience for some people. In fact, a major new study published in the Journal of Science and Medicine in Sport found that breast size can affect how women exercise, The New York Times reports, and that includes whether they decide to exercise at all. The researchers say it’s time to start including breast size and bra fit as a factor in conversations about what’s keeping people from being physically active, according to The New York Times. While this news likely won't come as a surprise to anyone who has trouble finding a supportive sports bra, having research on this issue can make it easier for bra-makers to develop better solutions.

Researchers from the Biomechanics Research Laboratory at the University of Wollongong in Australia recruited women ages 18 to 75 who were willing to have their breasts measured and discussed for the study, The New York Times reports. Around 355 women volunteered for the study, says The New York Times, and they answered questions about what kind of physical activities they’d participated in over the past week and how intense those activities were. They also answered questions about whether they felt their breast sizes influenced how they exercised, The New York Times reports.

The researchers used three-dimensional scanning to precisely measure the volume of each participants’ breasts and categorized them as small, medium, large, or very large, according to The New York Times. The New York Times says the researchers didn’t rely on bra sizes because those are "notoriously inconsistent." The researchers found that the participants with very large breasts were significantly less physically active than those with smaller breasts. The participants with large breasts also did less vigorous activities than those with smaller breasts, according to the study, and the women with larger breasts felt their breast sizes affected how physically active they could be.

Even when you aren’t exercising, having large breasts can sometimes cause daily discomfort. Large breasts can cause “shoulder grooving, to back and neck pain, and even sweating and rashes,” according to Bustle writer Eva Taylor Grant. According to Mayo Clinic, some people might also experience nerve pain if they have larger breasts, and some people opt to have breast reduction surgery to alleviate their discomfort. "Plastic Surgeons certified by the American Board of Plastic Surgery perform more than 90,000 breast reductions each year in the United States," Dr. Brian Eichenberg, certified plastic surgeon, previously told Bustle. "It is very common."

Surgery isn’t accessible to everyone (or even the right option for everyone), so Celeste Coltman, who led the study and is now assistant professor at the University of Canberra in Australia, told The New York Times that finding a high-quality sports bra or swimsuit that provides the support you need can help make it easier for people with breast discomfort to exercise.

If you’re still having breast discomfort even after finding a good bra, Dr. Coltman recommends swimming or water-based activities because the buoyant effect of the water typically decreases breast-related discomfort, says The New York Times.

As this new study shows, some women have complicated relationships with their breasts, and it's so important to talk about that. Adding breast size and bra fit to the exercise conversation will make it much easier to talk about what all of the barriers to physical activity are — so we can start finding practical solutions.