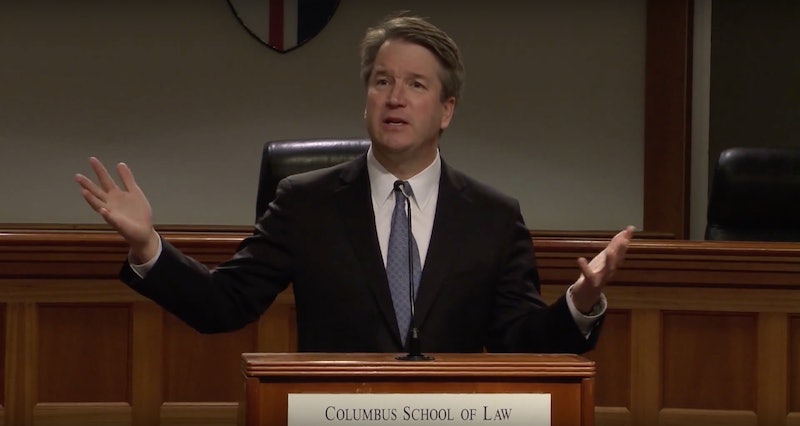 After Supreme Court Justice Anthony Kennedy announced his impending retirement, Democrats and Republicans have been scrambling to determine what impact yet another Trump-appointee could have on the country's highest court. A new judge could seriously affect the legal culture of the United States, and one point of contention is whether or not whoever is appointed will protect Roe v. Wade. Among those Trump is reportedly considering nominating from a shortlist is Judge Brett Kavanaugh, though his stance on abortion isn't immediately clear.

Recently, Kavanaugh was involved in a high-profile case that existed at the intersection of abortion and immigration. It involved an undocumented minor, and concerned whether or not she could be allowed to leave custody in order to receive an abortion. According to The L.A. Times, Kavanaugh sided with Trump administration lawyers when he wrote the majority decision that argued the abortion would have to wait an additional 10 days. That ruling was eventually overturned.

Otherwise, the L.A. Times reports that Kavanaugh has not publicly come out for or against upholding Roe v .Wade. According to the L.A. paper, this is typical of judges.

Kavanaugh is considered to be one of the most likely picks for Trump's nomination. He is currently a U.S. Circuit judge, and used to work as a clerk for Kennedy. A friend told The Washington Post that Kennedy is more down-to-earth than his job and education credentials might otherwise indicate.

“Even though he has Ivy League credentials and a fancy job, he’s kind of a regular, all-American guy," Helgi Walker, a litigator who worked with Kavanaugh during the Bush administration told the Post. "He likes to play basketball and drink beer ... It’s very refreshing in a town like Washington."

But those who work to protect abortion access all but immediately called for concern following Kennedy's retirement announcement. It's understood that presidents appoint justices who align with their own political views, and a conservative justice would cement the court's ideological bent toward the right.

"With this vacancy, Donald Trump and Mitch McConnell hold the balance of the court in their hands — and with it, the legal right to access abortion in this country," Dawn Laguens, Executive Vice President of Planned Parenthood Federation of America, said in a statement following the news. "President Trump has promised to only appoint justices who will overturn Roe v. Wade. The idea of Trump having his choice to fill another vacancy is terrifying for not only abortion rights, but for our ability to live free from discrimination in this country."

In order for Roe v. Wade to be overturned, a substantively related case will have to make its way up to the Supreme Court. Cases like those are very difficult to predict, but certain anti-abortion groups have made escalating such a case to be a major priority. One way to do this is to pass abortion-limiting legislation that is certain to face strong legal pushback. As we have seen with various proposed abortion bans throughout the United States, these efforts are well underway.

In the interest of not putting the cart before the horse, however, it's important to pay attention to who Trump ultimately picks and how Republican senators respond to the eventual nominee. Republicans hold a slim majority in Congress, but not all are guaranteed to vote for confirmation. Republican Sen. Susan Collins, for example, has said she won't support a nominee who is hostile to abortion access.

Though we don't know exactly when a nominee will be announced, Trump has said he intends to move quickly, and Sen. Mitch McConnell said there would be a vote by this fall. Until then, it is largely a guessing game.