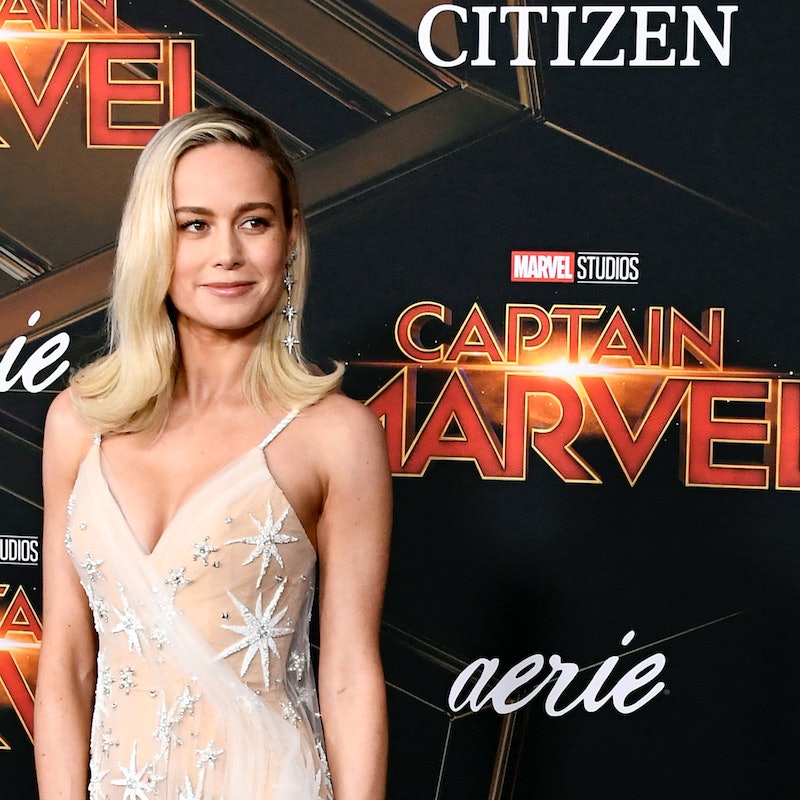 It's official: Marvel Studios' Captain Marvel crushed box offices during its opening weekend. And the hero herself celebrated in a special way. Brie Larson surprised fans at a Captain Marvel screening, and even served up popcorn to a few lucky moviegoers. Unfortunately, she wasn't suited up in her official gear, but she compromised with a pretty cool — and heroic — sweatsuit.

Marvel Studios documented Larson's theater visit on their Instagram page, which displayed her heroism transcending the big screen. She strolled the theater halls sipping from a cup with her character printed on it, and as soon as she entered a screening room, it erupted with applause and cheers.

"I just heard that I was on the cups and popcorn and I wanted to see for myself," she said, standing at the front of the room as cameras flashed all around her. "So thank you so much for coming. You guys are so awesome to come opening weekend." She exited proclaiming the film's empowering catch phrase: "Higher, further, faster!"

Before the show, she worked with theater employees behind the concession stand serving popcorn and soda, which was documented on Marvel Studios' Instagram Story. She served a young girl and said, "Nice to meet you!" The top-knotted child promptly waved back. Larson also took photos with fans.

According to NorthJersey.com, Larson visited a theater in Clifton, New Jersey. The fans who were lucky enough to meet her shared their excitement on social media. "Funny story I wanted to take my little cousins to see the new #captainmarvel and we ended up seeing #captainmarvel herself @brielarson serving guests at our local #amc," @sweet_and_simple wrote on Instagram. "And she was kind enough to take time to speak with these young ladies and made this night one they won't forget. What an amazing experience. Even better following #internationalwomensday that these girls get to meet a #realrolemodel and #hero."

The film is Marvel's first female-led superhero movie, and its premiere closely followed International Women's Day. Larson shared a heartwarming photo alongside co-stars Gemma Chan and Lashana Lynch to celebrate. "Happy International Women's Day to every type of woman — however you choose to define yourself, and all the ways you choose not to," she wrote. "Let that star shine! I see you!"

According to The Wrap, Captain Marvel has saved a sluggish 2019 box office with a "$153 million opening from 4,310 screens," giving it the third place ranking in best March opening weekends of all time. That's a far cry from its controversial audience score of 57 percent on Rotten Tomatoes. According to IGN, the movie was at an audience score of 33 percent within hours of its premiere before the site removed thousands of fake negative reviews that were posted in attempt to sabotage ratings. The site claims a technical glitch allowed such a thing to happen.

Like the movie's hero, Captain Marvel fought back, and it won. Now Larson can get back to the business of surprising young Carol Danvers' fans.

More like this
Everything You Need To Know About ‘Black Panther: Wakanda Forever’
By Bustle Editors
Alan Rickman's Diary Reveals Why He Considered Leaving 'Harry Potter'
By Darshita Goyal
UK Viewers Will Have To Wait For The Terrifying 'Hellraiser' Reboot
By El Hunt
Lin-Manuel Miranda & Tituss Burgess React To 'Little Mermaid' Casting Backlash
By Radhika Menon
Get Even More From Bustle — Sign Up For The Newsletter