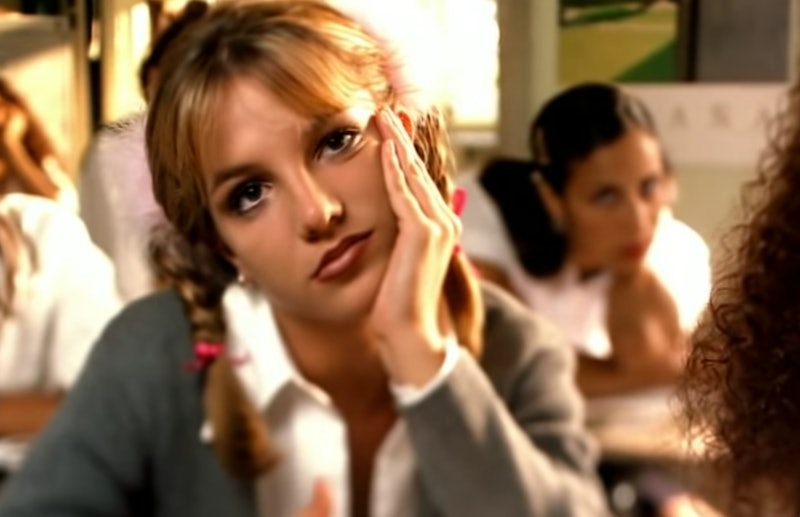 The '90s were a time of great musical moments, and one of the greatest came when Britney Spears released her first album in 1999 — that's right, it's been 20 years since the pop singer made her debut. And on Jan. 12, Britney Spears shared a...Baby One More Time post on Instagram celebrating the anniversary of the day her landmark album came out. Prepare yourselves, because '90s kids everywhere are about to get super emotional.

Spears posted the album cover along with a heartfelt note about the anniversary. The singer wrote,

"Can you believe that this album was released 20 years ago today??!! I can't. It's definitely been the journey of a lifetime, full of ups and downs, but I'm grateful for every single moment of it all. Getting to know you all over the years has been such an incredible experience, and has made this all worth it. Thank you for your support from 20 years ago, all the way to today. I am blessed #20yearsofbritney"

Although it's a little hard to believe that the world has only had this album for two decades, it's also crazy to think that so many years have gone by since Spears first came into our lives.

...Baby One More Time was released on Jan. 12, 1999 and it instantly launched Spears' career. It sold 10.6 million copies, according to Billboard and Nielsen, and it's partly responsible for making her the 17th best selling album artist since 1991. As reported by Vulture, she recorded the record in Sweden with world-renowned songwriter and producer Max Martin, who's also worked with artists like Taylor Swift, Ariana Grande, and The Backstreet Boys. He also went on to co-produce her next two albums, Oops!... I Did It Again and Britney.

The album included iconic bops like "Sometimes," "(You Drive Me) Crazy," and "From the Bottom of My Broken Heart," and it won a Teen Choice Award for Choice Music: Album. Perhaps most impressively, it gained Spears a Guinness World Record for Best Selling Album by a Teenage Solo Artist, since she was only 17 when it was released.

Of course, you can't skim over the title song, "...Baby One More Time." It's not only the main single and biggest takeaway song from the album, but it also inspired the legendary music video as well. The music video showed off Britney Spears' dance expertise and properly introduced her into the world when she was just beginning.

The single and video were released in November of 1998, which Spears also commemorated in a post this past November. It really was the perfect introduction to the pop star, her very distinct voice, and her soon-to-be superstar attitude. In 1998, no one could have guessed that she was going to become America's Sweetheart, take a downturn almost a decade later, then rise from the ashes to still have one of the most recognizable intros and biggest hits of all time 20 years after the fact. Basically, ...Baby One More Time will always be the epitome of pop magic.

More like this
Britney Spears Celebrated Her Birthday With Loving Messages To Jamie Lynn & Her Sons
By Brad Witter
The Britney Spears Disney Princess Musical Is Finally Opening On Broadway
By Jake Viswanath
Paris Hilton’s Tweet About The 2006 “Holy Trinity” Photo Will Make You Feel Old
By Marina Watts
The Kenan & Kel Reunion On SNL Took A Dramatic Turn, Thanks To Keke Palmer
By Brad Witter
Get Even More From Bustle — Sign Up For The Newsletter