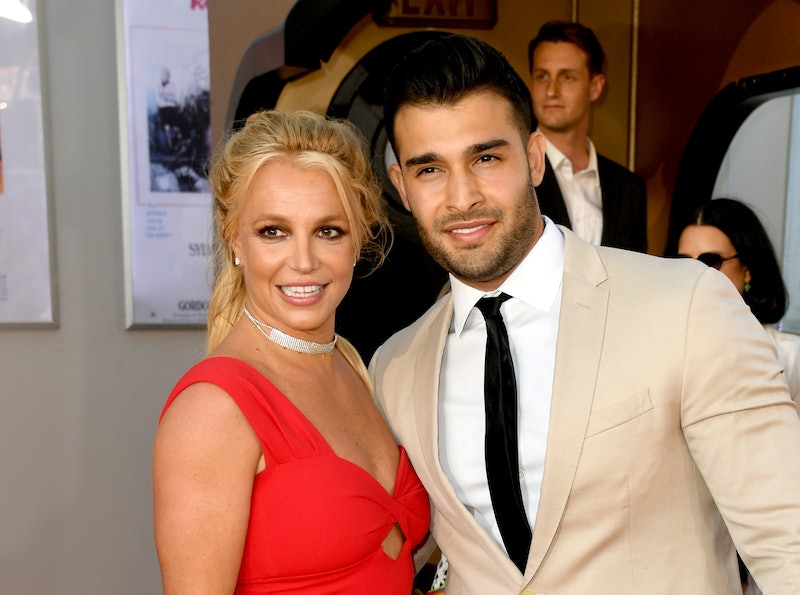 It's been almost three years since they first crossed paths on the sultry set of a music video. And while fans have long-known where their relationship began, the nitty-gritty of how it began has kind of been a mystery — until now. During a recent interview with Entertainment Tonight, Britney Spears' boyfriend Sam Asghari spilled new details about how their meet-cute went down. His sit-down with the outlet was super endearing, and what Asghari revealed will probably surprise you.

Back in December 2016, People reported that Spears was spending time with Asghari, who had recently starred in her very steamy music video for her song, "Slumber Party." It wouldn't be long before they basically made their relationship Instagram official, and they're still going strong today.

So, how did they go from on-set co-stars to a real-life couple, you wonder? Well — aside from the super unique circumstances under which they first met — it sounds like they connected in a totally normal way.

During a recent sit-down with ET, Asghari recalled how Spears hand-picked him for the "Slumber Party" job, without even having to go through an actual audition. "It was a direct book," he revealed. "A good friend of mine was working on the music video at the time. They told the casting director to cast this guy and then they sent my pictures to [Britney] and she picked it. 'I want this guy' -- and so that's how it was," he explained.

So, there he is, on the set of a major music video, with one of the most legendary pop stars in the world. Did he shoot his shot right then and there? Not exactly — and the way Asghari described it to ET, the whole experience was pretty low-key.

"We talked at the music video [and] we talked about what do you like to eat, sushi," he told the outlet. "Then text messages and next thing you know, just like a normal couple."

Their initial introduction didn't go quite as smoothly, as Asghari recalled to Men's Health a few years later, but clearly, Spears didn't mind. "She said, 'Hi, I’m Britney,' and I said, 'I’m sorry. What’s your name again?'" he told the outlet with a laugh. "I tried to be funny. I don’t think anybody got it," Asghari admitted.

Hey, you can't blame the guy for being a little nervous. After all, it's Britney-freaking-Spears. "I was excited ... to meet one of the biggest artists of all time," Asghari told Men's Health, after which he admitted that he definitely "had butterflies."

These days, Asghari and Spears seem like they're more in love than ever. "Sam has been an absolute dream come true for Britney," a source told Us Weekly back in May. "He is such a positive light in her life. No one makes her smile this much — other than her boys."

And to think that it all started with an awkward joke and some small talk about sushi. That definitely sounds like the beginnings of a "normal couple."