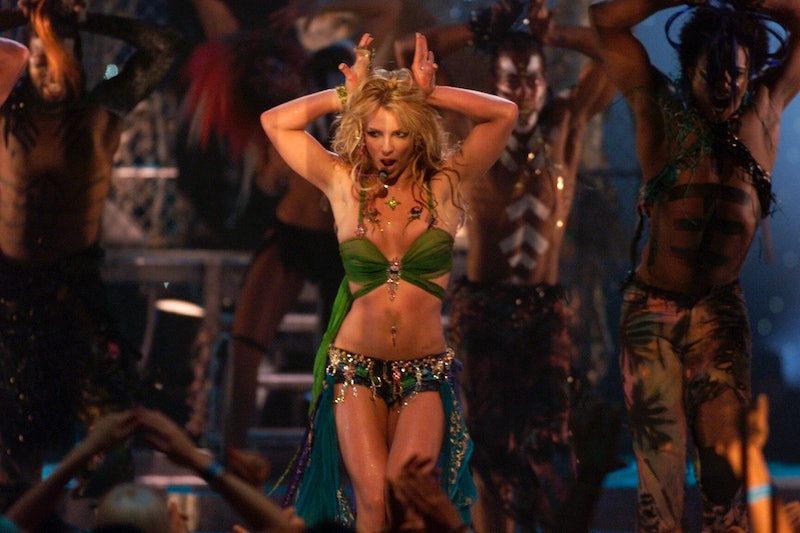 It's not even Thursday yet, but Britney Spears is giving fans a blast from the past by posting the ultimate throwback video to her Instagram that's guaranteed to make you feel like a teenager again. As a nod to one of her most iconic performances on stage, Britney Spears danced to Billie Eilish's "Bad Guy" song with a stuffed snake, which she posted to her social media account on Monday night. The choreography that accompanies the song is pretty intricate, but there's no missing the parallels between this and that other time the pop star opted to have a snake as a dance partner.

“Great song !! It made me pick up another 🐍 @billieeilish,” Spears captioned alongside the video. She's, of course, referencing the time back in 2001 when she famously used a live python as a prop during her performance of "Slave 4 U" at the MTV Video Music Awards. The snake made its debut halfway through the song and made an everlasting impression on fans who were in complete awe of the daring stunt. Granted, this latest snake is stuffed, making the dance a somewhat less shocking sight to witness, but it still serves as a fun throwback nonetheless.

And yes, in case you were wondering, it didn't take Eilish long to catch wind of Spears' shoutout, which prompted her to comment on the video post with a simple "omg," which pretty much sums up how we're all collectively feeling. The clip features Spears in a dark foyer, so it's difficult to see the impressive dance routine in its full effect, but there's no denying that the singer is still able to bust a serious move whenever inspiration strikes. And hey, sometimes you just have to dance in the middle of your foyer with a stuffed snake. We've all been there.

This isn't the only noteworthy video Spears has posted as of late. On Friday, May 31, she uploaded a video of her making funny faces, stating in the caption that “after therapy and being too serious it’s so nice to be silly!!!!!” It's proven to be a tough year for Spears, who has been reportedly helping her father recover from a life-threatening colon rupture, which put him in the hospital over the holiday season. In addition to that, People reported back in April that Spears was seeking treatment at a wellness facility for her mental health. She has since checked out of the facility and is undergoing outpatient treatment.

But despite all of the struggles and hardships she's had to endure this year, Spears seems to be doing really well, which is more than demonstrated in this delightful video. She continues to have a passion for dancing and is using those skills to have some much needed fun. Eilish is already developing a wide fanbase on this point in her budding career, but now she can also take comfort in knowing that she has the likes of a music legend like Britney Spears in her corner. Perhaps a collaboration between these two should be in order.