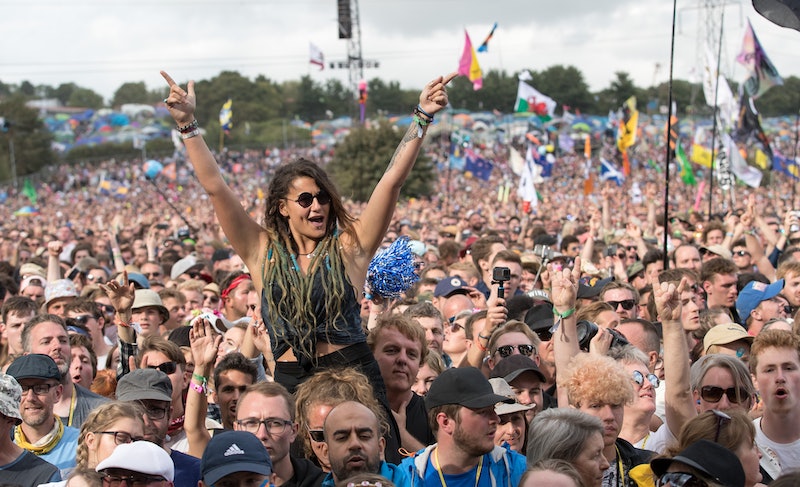 Forget jetting off to a far-flung destination or planning a staycation this summer, because there's a new form of vacation taking over the UK, and it involves some pretty iconic festivals. Thanks to the plethora of music events on offer across the country, it seems that Brits are more likely to choose festivals over holidays abroad — and for good reason. According to a new study carried out by OnePoll and commissioned by Barclaycard, 20 per cent of the 2,000 British adults polled will be attending a festival instead of a trip overseas, with 32 per cent now seeing a live entertainment event as their main trip for the summer.

When you think about it, this result really isn't that surprising. Pretty much every festival has become a three-day event, constituting a weekend away enjoying your fave bands and tunes in the company of like-minded people. With 25 per cent of Brits attending a festival for the first time this year, there's certainly plenty to choose from that may be small in scope but have a similar to feel to some of the major players like Glastonbury, Reading and Leeds, Isle of Wight, and Bestival.

And even though the survey also found that "[m]ore than 22 per cent worry they will run out of money, with 16 per cent admitting they are not sure how to budget effectively," there are plenty of affordable festivals across the country where this worry needn't be an issue.

"It's fascinating to see how live entertainment events have evolved over the past few years," Daniel Mathieson, Head of Sponsorship at Barclaycard said in a press statement. "Festivals are no longer just about the music, but about find opportunities to discover new ways to have fun and make memories, whether that's taking a yoga class, trying out a new cuisine, or seeing a comedian."

"Festivals continue to support a wide-range of interests and for many, have become a cultural rite of passage. With many events now billed as entertainment hubs offering so much to do and see, it's not surprising Brits are considering putting off a trip abroad in favour of some festival fun!"

If you're struggling to pick which festivals to attend this summer, Festicket has an extensive list of ones that need to be on your radar.