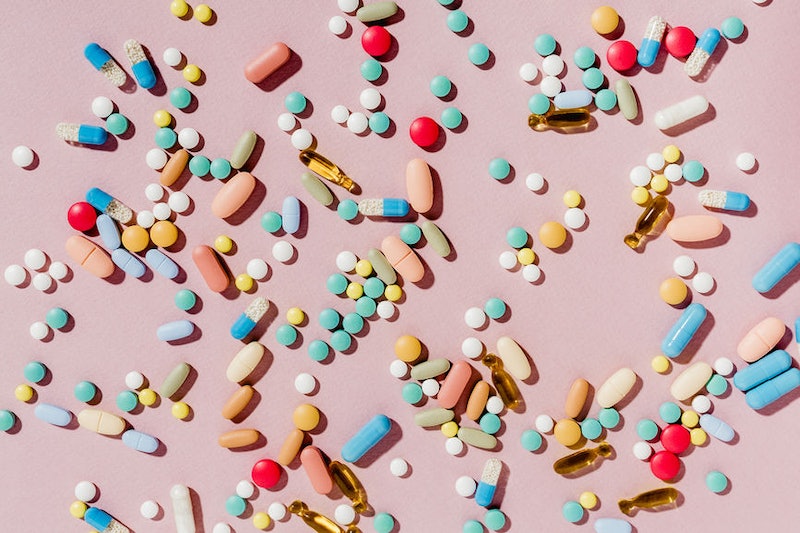 According to a new study, people in the UK are more likely to mix drugs and sex than those in Europe, Australia, Canada, or the U.S. Research published in the Global Drugs Survey 2019 found that Brits more likely to have substance-linked sex, along with some other very interesting stats.

The Global Drugs Survey 2019 questioned 22,000 people about their sexual practices. The findings, which were published in the Journal of Sexual Medicine, revealed that Brits were more likely to mix sex and drugs than their American, Canadian, Australians or European counterparts. Perhaps unsurprisingly, alcohol came out as the top drug that people had used before having sex. The BBC reported that 60 percent of female respondents and 58 percent of male had drank before sex in the last year. However, alcohol wasn’t the only substance used. The study found that people in the UK are also most likely to combine the drugs cannabis, MDMA, cocaine, and mephedrone with having sex.

Using drugs while having sex can be known as Chemsex. According to the BMJ (formerly known as the British Medical Journal), Chemsex "is used in the United Kingdom to describe intentional sex under the influence of psychoactive drugs."

While the the Global Drugs Survey 2019 found some interesting stats in regards to geographical differences, the actual aim of the research was something different. The introduction of the study states: "Substance use in sexual contexts has received recent attention, but it has mostly been restricted to men who have sex with men and the so-called 'chemsex' phenomenon." The study's aim was "[t]o explore the use of licit and illicit substances in combination with sex in heterosexual, homosexual, and bisexual men and women; to explore substance-linked sex (SLS) differences across sexual orientation and sexes."

The Global Drugs Survey 2019 found that, while "larger proportions of homosexual and bisexual men reported [using drugs with the intention of enhancing a sexual experience] than heterosexual men," men and women across all sexual orientations said they had explored "substance-linked sex."

Dr Will Lawn works in the Psychology & Language Sciences department at University College London, and is one of the author of this study. He said: “While using drugs in combination with and to specifically enhance the sexual experience tends to be associated with gay and bisexual men, we found that in our sample, men and women of all sexual orientations engaged in this behaviour.”

Lawn says that "[h]arm reduction messages relating to substance-linked sex in general should therefore not only be targeted towards gay and bisexual men, as they are relevant to all groups."

In addition, The Global Drugs Survey 2019 identified that people on higher incomes are also more likely to mix drugs and sex. And substance misuse and criminal justice charity Change Grow Live affirm this finding, stating "many individuals [who engage in Chemsex] are in full-time employment, [and] have high levels of disposable income." They hope that this fact will help change the narrative around Chemsex. On their website, they write: "Chemsex is a diverse and complex phenomenon and those engaged in the activity may not fit the typical profile of a person with a serious drug addiction."

No matter the statistics, remember that it's always important to put safety first. As Marc Thompson, a representative of the sexual health charity Terrence Higgins Trust, told the BBC:

"Drug use can lead to people taking risks during sex they wouldn't ordinarily take which increases the chances of contracting HIV and other sexually transmitted infections and why testing regularly is really important. As this report highlights, drug use and sex is something that is not exclusive to gay and bisexual men but is something that happens across the wider population. Therefore it's vital that everyone knows the potential risks this can result in."

More like this
The 19 Best Tweets & Memes About Bisexual Awareness Week
By Lexi Inks
Are Quality Time & Gift-Receiving Love Languages Compatible?
By Lexi Inks
10 Creative Sexting Ideas That Don't Involve Nudes
By Lexi Inks
How To Set Rules If You're In An Open Relationship
By Lexi Inks
Get The Very Best Of Bustle/UK