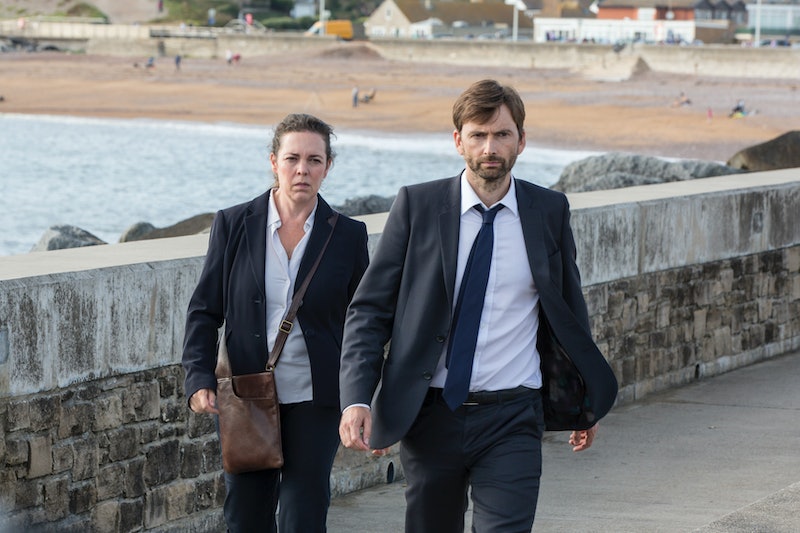 The British crime drama Broadchurch has built to its third finale, and it promises a satisfying reveal for its final mystery. That's right — Broadchurch won't return for Season 4, so the Aug. 16 conclusion will mark the end of the popular series. Its first season was another in a wave of TV murder mysteries, but its cast of small-town suspects set it apart. In the first season finale (spoilers!), Joe Miller, the husband of protagonist and detective Ellie Miller (Olivia Colman), was revealed to be Danny's abuser and murderer. The show's second season returned to the Latimer case, showing the effects Joe's trial had on the town, while also allowing Alec Hardy (David Tennant) to close another case that haunted him. That season was a bit anticlimactic, with the new characters less compelling than the originals, and the last minute shock — that Joe was acquitted — not landing nearly as powerfully as his Season 1 exposure.

But the series' third and final season breathed new life into the Broadchurch concept once again. Season 3 changed focus to a new group of characters, with only Ellie, fellow Alec, Beth and Mark Latimer, and a few other original characters returning. The central crime of this season was the rape of an adult women, switching tracks from the child murders of the two previous mysteries. So why end the series now, on this note?

"It’s hard to say goodbye. I’ve asked myself, ‘Why am I walking away from the two best actors in the country?" Broadchurch creator Chris Chibnall said to The Radio Times, presumably talking about Colman and Tennant. But he is emphatic that Season 3 will be the end of Broadchurch. "That is it and there will be no more after this one, absolutely," Chibnall said to BBC Radio Four.

Chibnall told The Radio Times in the same article that he specifically chose Trish's assault to anchor the finale season, because "often [rape is] not treated with the time or delicacy it deserves." The structure and realism of Broadchurch allowed the writer to explore how an attack like this affects a community and the stigma that comes along with it.

After playing the grumpy but compassionate Hardy for three seasons, Tennant told Indiewire that he's glad Broadchurch Season 3 will be the last. "I think that if something has the great fortune to be a success, I think there’s always inevitably talk of taking it further and doing more with it, but that was never the intention," he said.

All the comments from the main players involved should put any rumors of a possible Broadchurch spinoff or prequel to rest. Anyway, Chibnall is the new Doctor Who showrunner, so he'll be far too busy to dream up additional ideas for what the pair of bickering DI's could investigate next. At least one Broadchurch collaboration will continue, since he cast Jodie Whittaker, who has played Beth Latimer for the entire series, as the first female regeneration of the Doctor.

It's always disappointing when a well-done and meaningful series comes to an end. But Broadchurch has taken a thoughtful approach to the procedural format, created some memorable characters, and is only leaving the airwares after broaching an incredibly tough but important topic.