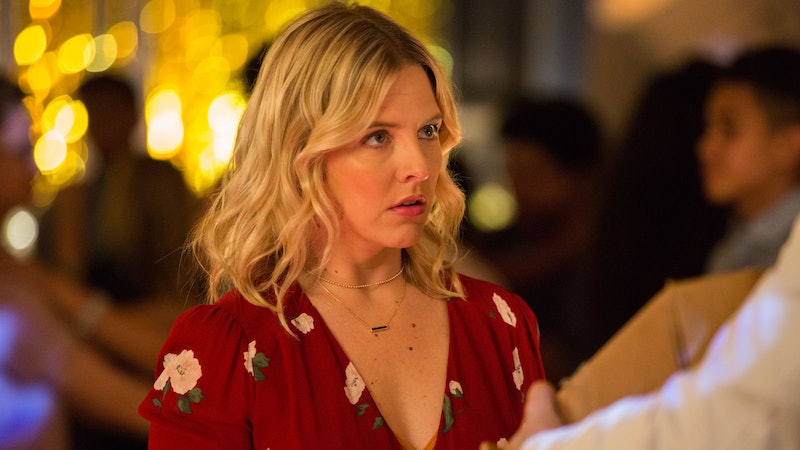 Watching their young brother become mega-successful at such a young age has been bittersweet for Cary and Brooke on The Other Two. Though over a decade older than Chase, they're still figuring things out themselves, and while they're happy for their sibling, they can't help but feel a bit envious. At the end of the Feb. 21 episode, however, they share a conversation that helps put things into perspective — and nails why this show is perfect for any millennial struggling to get their sh*t together.

In the episode, Cary bonds with a teacher at a school dance while helping him with the time-honored educator's tradition that is wandering around campus and trying to catch kids hooking up. Jeremy also wanted to be an actor, but didn't feel as though the grind of waiting tables while waiting for success to hit was for him — which is, of course, what Cary is still doing. Instead, Jeremy is teaching... and directing his umpteenth production of Grease.

Later, Cary wonders if he's fooling himself. Maybe he should quit, choose the suburban life instead, and be happy, he wonders aloud. If success and fame hasn't found him at 28, will it ever? "Maybe I just missed my wave," he says.

"You are so dumb," Brooke replies, "Chase is your wave." Or, at least, he could be. "I'm gonna say this with love: you are not above all of this," she adds. "I feel like you had this romantic vision of how this was gonna play out for you, when sometimes it just doesn't happen that way. It happens in a million weird ways. Maybe Chase is your weird way."

No matter what you want in life, whether it's fame, success, or any kind of goal, learning to let go of that perfect path you've romanticized is excellent, necessary advice. It's something that millennials, a generation of multi-hyphenate freelancers, know all about.

So often, aspiring artists ask successful artists what advice they have for starting out — what's the secret, the right path, the trick? The only answer, as cliché as this may sound, is that there is no answer. Some people are lucky. Some people are privileged. Some are persistent. Nobody's path is exactly like anyone else's.

Fame can also be kind of arbitrary — illustrated comedically in this episode by the way a 50-year-old woman (played by Jackie Hoffman) is so easily able to impersonate Chase, and Streeter puts a boy band together by just gathering "types" from a crowd of teens. Meanwhile, the young girl belting the hell out of "Ring of Keys" from Fun Home can't seem to get anybody's attention despite her obvious talent.

Whether you've followed Cary's or Jeremy's path in life (or something in between), this storyline hits hard. The grass always looks greener, and you're bound to feel regret at some point and want to quit. When Jeremy tells Cary he "didn't want to be waiting tables at age 30," it makes him doubt himself. But Brooke, who quite dancing at a young age after growing out of it, is right. There are a million paths to success and happiness, and most of them are super weird.