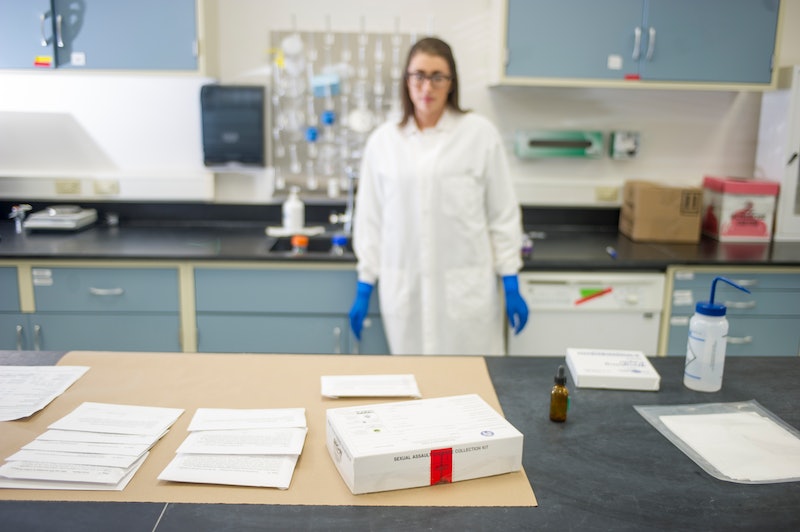 On Tuesday, New York Attorney General Eric Schneiderman announced that his office had reached a settlement with a Brooklyn hospital illegally charging rape victims for rape kits, which help preserve DNA evidence following a sexual assault. Now, the hospital has agreed to pay those victims back.

In New York, survivors of sexual assault are entitled by law to cost-free emergency care. But according to a press release from Schneiderman's office, Brooklyn Hospital Medical Center had illegally charged 85 rape victims hundreds of dollars in fees for forensic rape examinations (FREs) conducted over the past two years.

The settlement will require the hospital to provide will provide full restitution to the sexual assault victims affected. According to the settlement, that restitution will include all costs and fees paid to Brooklyn Hospital by the affected patients for FREs, as well as 12 percent interest for each year "from the date Brooklyn Hospital received the payment to the date of refund."

The settlement also requires the hospital to maintain a Sexual Assault Victim Policy to prevent improper billing in the future. Schneiderman's office has also sent letters to 10 additional hospitals in the state, seeking further information on their policies regarding forensic testing.

"The Brooklyn Hospital is just the first to be held accountable," Sonia Ossorio, president of the New York chapter of the National Organization for Women, says in a statement sent to Bustle. "It's imperative that every hospital in New York immediately stop this practice. It's unconscionable and re-traumatizing and prevents women from coming forward. Every hospital needs to know they are now on notice."

According to Schneiderman's office, the allegations first came to light due to a complaint by a sexual assault survivor who told the A.G.'s office she had been billed "seven separate times by Brooklyn Hospital for a forensic rape exam" — being billed hundreds of dollars each time. The unpaid bill was eventually sent to a collection agency.

"We don't charge victims of crime for fingerprint collection on their broken window, so why would it be appropriate to charge a victim of rape for the collection of evidence," Ossorio says. "Her body is the crime scene."

She added that the focus needs to be on helping victims restore their lives. "Survivors deserve respect, dignity, and our commitment to ensure that hospitals and law enforcement will do their due diligence," she says.

The hospital released a statement saying the bills were simply a mistake:

There was an inadvertent breakdown in our billing processes related to sexual assault victims, which we deeply regret. Working closely and transparently with the Attorney General's Office, the hospital designed interdisciplinary processes and protocols to ensure that these billing issues do not occur again and to reflect not only our compliance with the law, but also our longstanding commitment to victims of sexual assault.

The settlement requires that the hospital train its employees in the procedures regarding the billing of forensic examination and provide "billing records, patient notification forms and training information" to the A.G.'s office within 30 days.

In a press release announcing the settlement on Tuesday, Schneiderman called the hospital's conduct "intolerable," saying, "It is hard to imagine the heartbreak and anxiety that would come from having to fight a collection agency over a clearly unlawful, mistakenly charged rape kit." He urged those who had ever been improperly charged for a rape kit in New York to contact his office directly.

Schneiderman also took to Twitter on Tuesday to draw a parallel between women who are billed for their own rape kits and women who come forward to announce they've been assaulted. "The challenges facing survivors billed for their rape kits are the same ones facing the women who are coming forward across our country," he wrote. "We must acknowledge that there has been a systemic failure by institutions across America to protect women."