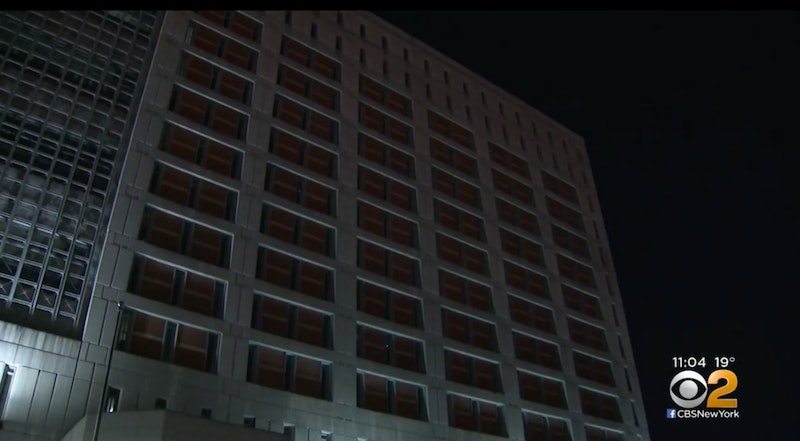 As a polar vortex brought temperatures in New York City plummeting down to just 2 degrees Fahrenheit earlier this week, inmates in a Brooklyn jail reported poor heating, a lack of power, and limited hot water. In fact, federal defenders told The New York Times they were "flooded" with complaints from dozens of inmates at the Metropolitan Detention Center, Brooklyn, when temperatures dropped below freezing earlier in the week. But a spokesperson for the jail has denied the allegations, saying that although the facility experienced a partial power outage, neither the heat nor the hot water in cells was impacted.

Update: In a statement provided to Bustle, a spokesperson for Metropolitan Detention Center, Brooklyn says a fire in the facility's switch gear room led to a partial power outage. "The facility is working to restore power as expeditiously as possible," a spokesperson tells Bustle, adding that they estimated the work would not be completed until Monday. "Inmates have hot water for showers and hot water in the sinks in the cell."

But federal defenders have said they've received multiple reports from inmates of freezing cells, blackouts, and no hot water. "In the past hour I have gotten 11 calls," paralegal Rachel Bass, who works in the Federal Defenders of New York's Brooklyn office, told The Times. "People are frantic. They're really, really scared. They don't have extra blankets. They don't have access to the commissary to buy an extra sweatshirt."

In a statement to Gothamist, executive director of the Federal Defenders of New York David Patton said inmates had reported "problems with a lack of heat, hot water, lighting, prolonged lockdowns, and medical care." Gothamist reported Patton shared emails with the outlet from defense attorneys reporting their clients had described potentially "fatal" conditions at the jail.

A spokesperson for the warden at the Metropolitan Detention Center, Brooklyn, told The Times that although there had been "a partial power outage" last Saturday, heat and hot water in housing units had not been impacted. The federal Bureau of Prisons [BOP] also told the news outlet that the prison was operating on emergency power due to the outage but that "cells have heat and hot water, there is lighting in the common areas and inmates are receiving hot meals."

Senior Staff Attorney and Director of Policy at Brooklyn Defender Services Scott Hechinger said his office had attempted to bring new thermals to those housed at the Metropolitan Detention Center, Brooklyn, but were denied. Inmates were scheduled to receive additional blankets and clothing — provided by New York City Emergency Services — on Saturday, a spokesperson for the Metropolitan Detention Center, Brooklyn tells Bustle.

On Friday, Rep. Nydia Velazquez said she was "alarmed" by reports that inmates were being housed in such conditions especially given the week's cold weather. "I am going to visit the facility to try and ascertain firsthand what is happening," she said in a tweeted statement.

On Saturday, Times reporter Annie Correal reported that a federal judge had ordered Metropolitan Detention Center, Brooklyn, to allow Deirdre von Dornum, who serves as the attorney-in-charge of the Federal Defenders for the Eastern District of New York, to tour the facility. Von Dornum told Correal that she was able to see and speak with inmates through their cell doors, noting they were dressed in layers with towels wrapped around their heads for added warmth.

According to von Dornum, inmates have been held in their cells, which have no electrical power and little heat, since Sunday as the center is still running on emergency power. Many said it was "significantly more agonizing" to be held in the dark for such a long period of time, Correal reported von Dornum had told her.

More than 1,600 inmates are housed at Metropolitan Detention Center, Brooklyn, according to The New York Times. On Saturday, a message on the facility's official webpage said all visiting at the detention center had been "suspended until further notice." A spokesperson tells Bustle the suspension was due to the partial power outage but did not elaborate as to when visiting was expected to be restored.

Update: This story has been updated with a statement from Metropolitan Detention Center, Brooklyn.