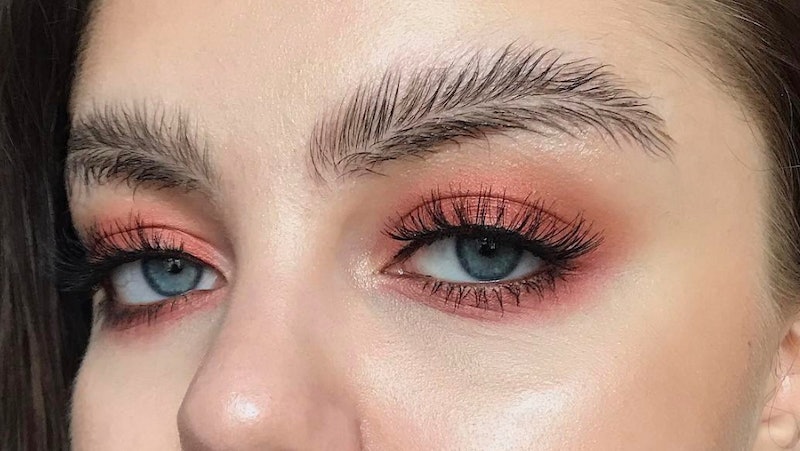 The Internet is a house divided over a new — sort of — eyebrow trend, started by Finnish makeup artist Stella Sironen. A few days ago, Sironen Instagrammed a photo of an eyebrow that was parted down the middle, with hair brushed in opposite directions and slicked down. And thus feather brows (or brow feathering) was born.

Sironen's cool AF brow trick visually mimicked a feather and was at once strange, stunning, and artistic. It was actually kinda wearable, especially if you are blessed with a full, thick brow. It started out as a joke by a supremely talented MUA; then it became a thing, as is often the case with the Internet.

Online trolls started hurling hate towards the designed brow, while other people expressed appreciation for it.

Personally, I dig it. It's much softer and more realistic than that bold, block-ish look known as "Instagram Brow." Once the brow feather took off, Sironen posted another Insta, further telling followers, lovers, and haters how to recreate this look.

I don't get the hate. The brow feather may not be for everybody, but it's unique and it's fun. If you don't like it, then don't replicate it.

It's funny that the w-w-w was soooooo divided over these brows, which have a dividing line.

I tried to start a part in my brows and it was difficult and time-consuming, so much so that I gave up after, like, a minute. The brow feather (or feather brow) does take some time, skill, and patience.

Here's what happens when something done in jest goes legit. One Insta commenter offered this astute assessment of the whole brow feather thing: "Joke or not , you started something."

#Preach! Sironen, who admitted taking the initial inspo from a friend who is her muse, was inventive and clever with the feather brow. Makeup just isn't just about applying products on top of products.