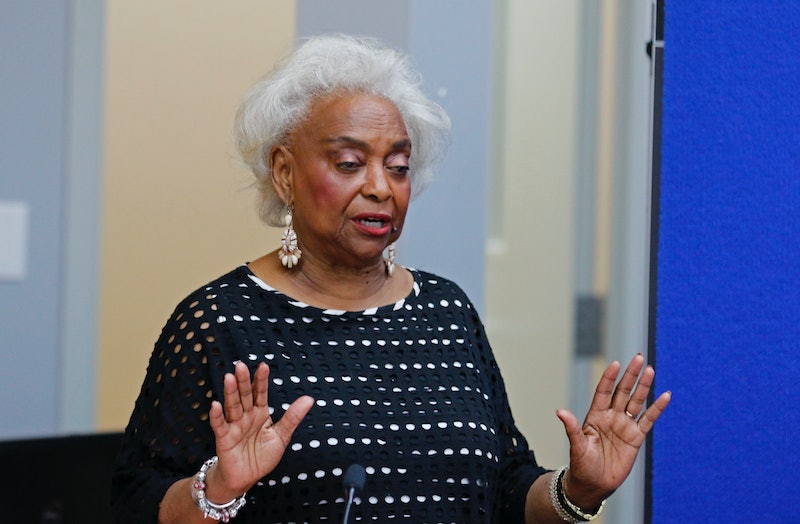 The last vote counts in Florida were just certified on Sunday — nearly two weeks after Election Day, following machine and hand recounts in some of the most contentious races. Now, one local official in charge of overseeing the election process is out. Frequent Trump target Brenda Snipes resigned as Broward County Supervisor of Elections on Sunday. The president had called her a "disaster" — and she was even criticized by Democrats.

The county, just north of Miami-Dade, is one of the most Democratic in the state. Alleged missteps there hurt Dems in 2018 — but this is nothing new. Snipes was first appointed to the job in 2003 by Gov. Jeb Bush following the trouble with recounts in 2000. She has won reelection ever since, but her office was criticized for actions in 2004, 2016, and now 2018.

Her time in office will end in January according to the resignation letter that she sent to Gov. Rick Scott. "Although I have enjoyed this work tremendously over these many election cycles, both large and small, I am ready to pass the torch," Snipes wrote in the letter, which was obtained by CNN. Snipes also said that she had never planned to stay as long as she has.

There were two main issues stemming from the county in 2018. One was the ballot itself. Snipes' office designed a ballot that put the U.S. Senate race in the lower, lefthand corner — after the instructions. Many voters are thought to have passed by the race due to its placement. A large number of voters that did mark a candidate for governor did not mark a candidate for the senator, and at least some of them were confused by the design.

Then the second issue that Snipes was heavily criticized for was that her office missed the deadline to submit machine recounts to the state on Thursday. They were submitted just two minutes after the deadline, but that meant they were not counted and the preliminary results were used instead.

Another issue discovered after the machine recount was that some ballots had been misplaced. More than 2,000 votes were said to be "in the building" but lost. Snipes blamed this on undertrained election officials who may have placed ballots in the wrong tray.

Trump's attacks on Snipes focused on the county "finding votes out of nowhere." He pointed mostly to the difficulties in the county's past and did not offer any proof of misdeeds. "If you look at Broward County, they have had a horrible history,” Trump told reporters the week of the election. "And if you look at the person, in this case a woman, involved, she has had a horrible history."

The main problems from the past were in 2004 and 2016. The elections in between went smoothly. In 2004, the county reportedly lost 58,000 absentee ballots, which could have helped John Kerry win the state. In 2016, Snipe's office destroyed 6,000 ballots after a judge ordered that they be saved.

Snipe's decision has large implications. Her successor will be responsible for the 2020 vote count.