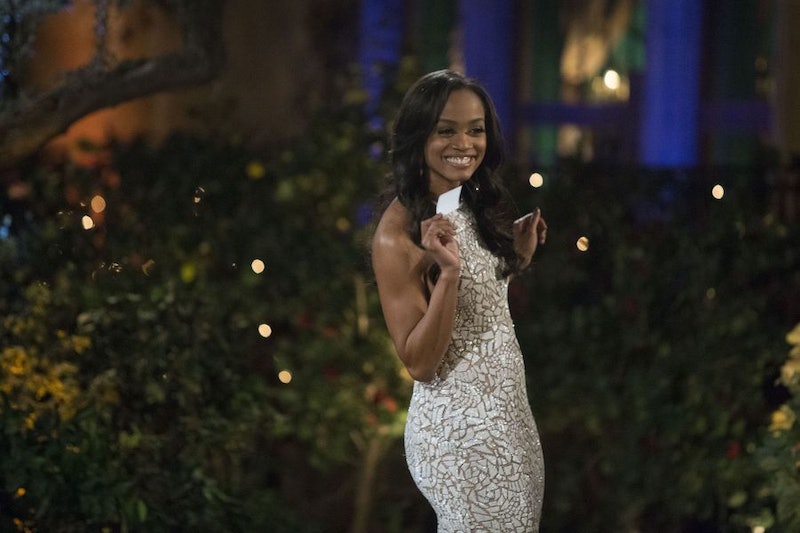 There are 31 suitors on Rachel’s season of The Bachelorette, but only one of those men can get the first rose of night one. Bryan got the first impression rose on The Bachelorette, so it sure seems like Bryan has caught Rachel’s eye. He's the one to beat, and now all of the other men are jealous.

During the premiere, Rachel grabbed that rose, took Bryan aside with a "can I steal you for a sec," and told him, "From the moment you walked out of the limo, I felt something that was unexplainable." Rachel likes how direct Bryan was, how he steers the conversation, the big smooch he gave her, and, of course, the fact that he spoke a little bit of Spanish to her (he's of Colombian heritage) certainly didn't hurt, either! Now, getting that first impression rose could go either way on The Bachelorette — it's not necessarily an indication of future success. Rachel herself got the first impression rose (she was the first black woman to do so) on Nick's season of The Bachelor, and Rachel was kicked out fourth-to-last from that season. Of course, she landed on her feet since she is the new Bachelorette and everything, but Bryan should know that just because he got dat rose doesn't mean he'll take things to the end.

Bryan should also know that this puts a big-time target on his back in terms of the other guys. All of the other contestants on The Bachelorette are going to be jealous of Bryan and they're not going to be nice about the fact that he is safe and one of Rachel's favorite guys just a few hours out. Good luck, Bryan. You may need it.