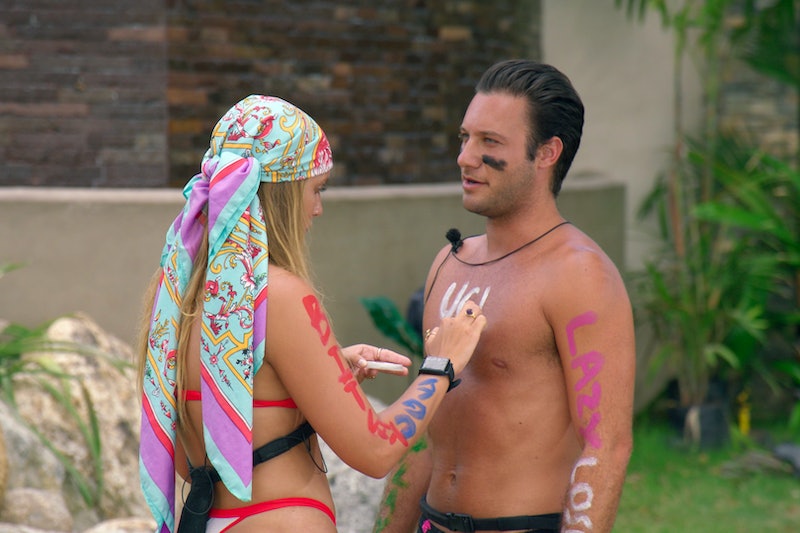 Spoiler alert for Too Hot to Handle Season 1. The chemistry between a couple Too Hot to Handle contestants was apparently so heated that they were blind to each other until after they left the island. After leaving the show brokenhearted, Bryce from Netflix's Too Hot to Handle is now dating another contestant from the show. And it's someone that viewers would never expect from the typical "Hollywood" guy.

Bryce, who became most famous on the show for bragging about sleeping with women everyday on the boat that he lives on, opened up about his relationship status during an interview with Entertainment Tonight. It turns out, he's dating someone he never thought he'd be compatible with: Nicole, the charming Irish girl who stole viewers' hearts when she proclaimed to be a "professional drinker."

"So Nicole and I have kind of been talking. She visited Los Angeles and we had a little bit of a thing. She's been making visits and whatnot," he told ET, even sharing that things "may or may not" have happened on his bed (thanks for that visual). "We have a great relationship, Nicole and I. She was planning on coming out [again] but with this quarantine, we're long distance technically." He's hesitant to put a label on their relationship just yet, but said that "maybe one day" there could be one.

Bryce and Nicole reconnected while spending a few days in Mexico together and noticing how good they looked together physically, and their bond has remained strong. "We both like to laugh and smile in the sun and drink and all that fun stuff," he said. "She is Irish and I like to drink, so voilà. We had a great time and we took some pictures together. We were like, 'Wow, we look really good together, don't we?' And then from there it was kind of like, wow, yeah, and it kind of grew from there."

Their connection was an unexpected left turn for Bryce following a rejection from Chloe, the girl he was originally pursuing when he arrived on the island. "In terms of Bryce, I followed my heart and my head," Chloe told ET in a separate interview. "I thought to myself, 'He's a really nice guy, but he's just not my type.'"

Ironically, Chloe is now BFFs with Nicole, and completely supportive of her budding romance with Bryce. "She loves it because she didn't really see Bryce in that kind of way," Nicole told Elite Daily. "I'm so, so lucky to have someone like that, who I can genuinely call a best friend for the rest of my life." Even when it comes to reality shows about romance, it's still sisters before misters.