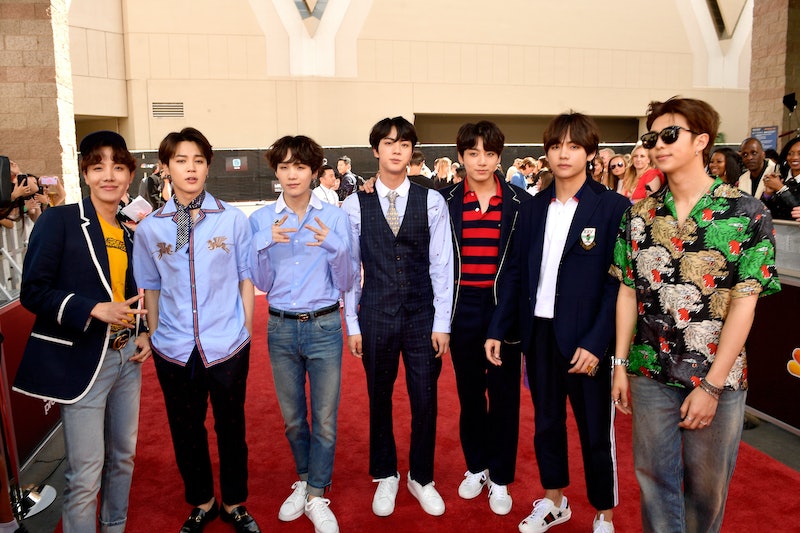 If you're not familiar with the Korean boy band BTS yet, perhaps it's time to get familiar before they take the stage at the 2018 Billboard Music Awards. After all, it might take awhile to get to know every member of the seven person K-pop group. BTS, also known as the Bangtan Boys, also known as 방탄소년단 or Bangtan Sonyeondan, made their debut in 2013. They first gained prominence throughout Korea and Japan, and now, they're starting to pick up steam in the states: BTS is nominated for a 2018 Billboard Music Award for Top Social Artist, alongside favorites like Shawn Mendes, Ariana Grande, and even Justin Bieber.

Of course, being part of a group like BTS means that your red carpet fashion has to not only be memorable, but also work in harmony with the rest of the band. BTS members Jin , Suga, J-Hope, RM, Jimin, V, and Jungkook brought their fashion A-game to the 2018 Billboard Music Awards red carpet, wearing a collection of outfits that are equal parts cool and casual.

The red carpet isn't the only place you'll see BTS, either. During the 2018 Billboard Music Awards, the group is slated to perform their highly-anticipated new single, "Fake Love."

The band has been teasing the performance on social media since the "Fake Love," music video debuted on May 18. The single is the first release from BTS's new album, Love Yourself: Tear. According to Forbes, "Fake Love" got 41 million YouTube views in its first 24 hours, making it the second-highest 24-hour debut for a music video in YouTube history (the record-holder in the No. 1 spot is Taylor Swift, whose music video for "Look What You Made Me Do" hit 43.2 million views in its first 24 hours.

It's not just social pull, either: K-pop is already quite popular in the United States, as a genre, and a group like BTS has all the fixings for a full crossover. According to Forbes, Love Yourself: Tear hit No. 1 on the U.S. iTunes chart just one hour after its release. Additionally, every single song on the 11-song album entered into the U.S. iTunes Top 20.

With that kind of momentum, it's no surprise that BTS showed up at the 2018 Billboard Music Awards ready to steal the show.