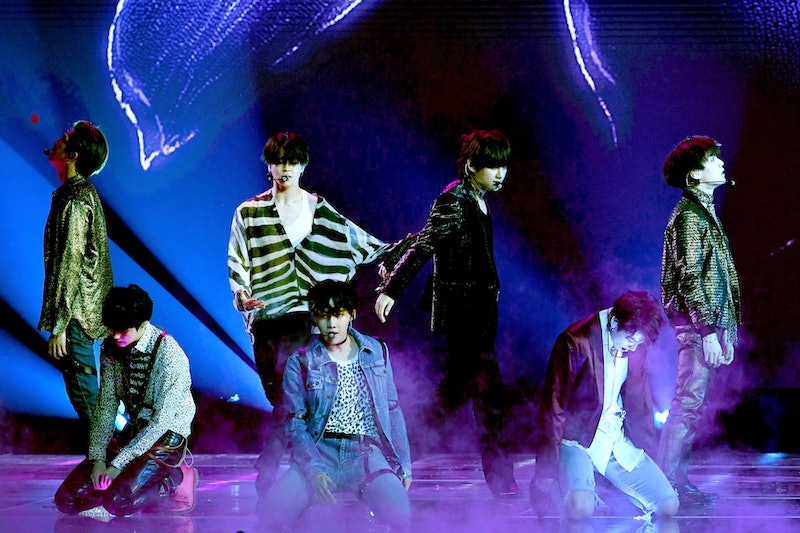 BTS are the undisputed kings of releasing content. Since the beginning of the year, the K-pop band has dropped an album, released a mobile game complete with an original soundtrack, and performed on a stadium tour that had stops in Asia, North America, Brazil, and Europe. Despite the fact that the seven members must be exhausted, it looks like they'll continue riding this wave: BTS just announced their upcoming film, Bring the Soul: The Movie, which will be released in theaters worldwide on August 7. BTS' label, Big Hit Entertainment, tweeted the news on Tuesday, June 25, and to say fans are excited would be an understatement.

Bring the Soul: The Movie will mark BTS' third venture into cinema, after 2018's documentary Burn the Stage: The Movie and their concert film Love Yourself in Seoul, which was released earlier this year. Both films saw record-breaking success: Upon its release, Burn the Stage became the highest-grossing global event cinema release ever, per Variety, scoring $18.5 million at the box office and beating out the previous record holder, One Direction: Where We Are.

Love Yourself in Seoul broke a record of its own, too. Having been released in 3,800 theaters across 95 different countries, it earned the title of largest worldwide event cinema release of all time, as reported by Forbes. Both Burn the Stage and Love Yourself in Seoul also re-entered theaters for a limited second run due to popular demand, so the BTS ARMY likely expect a similar level of success from Bring the Soul: The Movie.

While Burn the Stage followed BTS on their Wings tour, Bring the Soul will intersperse performances from the band's Love Yourself tour in Europe with more intimate footage of the members away from the crowds, reflecting on their experiences. Read the synopsis from Bring the Soul: The Movie's official website below:

"On the day following the final concert of their Europe tour, on a rooftop in Paris, BTS tells their very own stories from experiencing new cities to performing in front of thousands of ARMY across the globe. A glimpse into BTS’ world away from the stage, featuring intimate group discussions alongside spectacular concert performances from the tour, this is a cinema event not to be missed."

"A cinema event not to be missed" is right — you'll want to get your hands on those tickets as soon as possible when they go on sale on July 3. If this is anything like Burn the Stage, which sold almost 1 million tickets before the film's premiere, according to Billboard, pre-sale tickets will go extremely fast.

The promise of a new movie obviously had the ARMY excited, and many of them tweeted their reactions to the news soon after it was announced. And while a lot of the reaction is positive, there are also fans who are starting to wonder how the heck they're supposed to save money when BTS keeps releasing things — which, fair.

If August seems like way too long to wait for new BTS content, don't worry: there's plenty to obsess over in the meantime. You can spend the waiting period playing BTS World, their mobile game in which you act as their manager, which dropped on June 26. If that's not your thing, you can check out the accompanying soundtrack, which drops on June 28. A full tracklist hasn't been revealed yet, but the lead singles feature Charli XCX, Zara Larsson, and Juice WRLD. And if that's not enough to hold you over, after you buy tickets on July 3, you can also listen to their song "Lights," which drops the same day. (That's right. Kings of releasing content.) August 7 can't come soon enough.