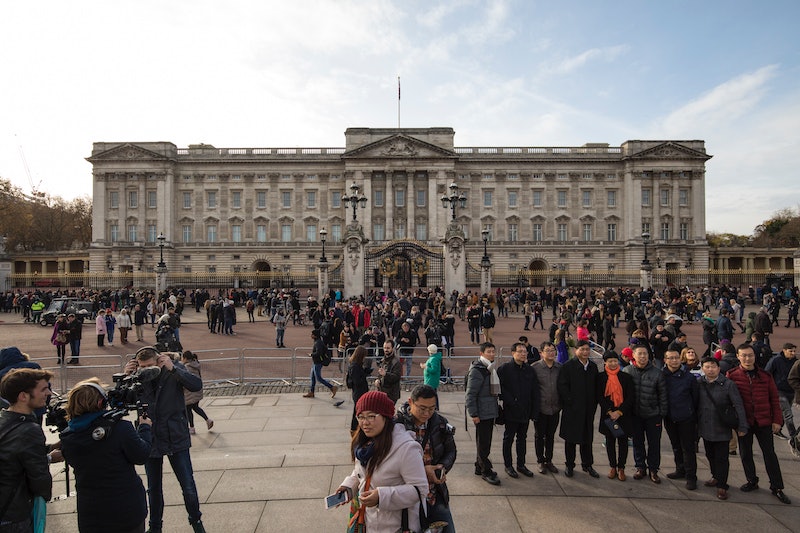 After watching Prince Harry and Meghan Markle's wedding taking place just months ago and seeing recent pics of Meghan and Kate (both sporting amazing looks) all-smiles at Wimbledon, I'd be lying if I said I didn't indulge in my own royal daydreams every once in awhile. This summer, Queen Elizabeth is spending time at her gorgeous estate in Scottish highlands, while Buckingham Palace is getting prepared to undergo giant renovations — renovations you can take a glimpse at with a new behind-the-scenes video of Buckingham Palace on Instagram.

Official tours of the Queen's famous residence in London are restricted to the the State Rooms, art gallery, and the magnificent garden, but a video posted on the royal family's Instagram account gives an exclusive peek into some areas of the palace that the public doesn't usually get to see.

The video gives an eye-level view of how the Palace staff navigate their way from the massive kitchens to the Chinese Drawing Room for events. Footage begins at the doors of a long, behind-the-scenes view of the kitchen area. From there the staff take an elevator and walk through the vast, red-carpeted corridors until they reach their destination. As the Palace will soon be undergoing roughly $484 million in renovations, the clip is meant to show how "Point Cloud" Technology (a software that can create 3D models) will be used to help coordinate essential design changes. "Currently many of the lifts are old and in impractical locations. New lifts will make the Palace more efficient & accessible," the caption reads.

Buckingham Palace's major design improvement plan was announced in 2016, and much of the work has focused on electrics, plumbing, and other key features in the building that remained unchanged for 60 years. "Buckingham Palace is one of the most iconic buildings in the world, and this programme is designed to extend its working life by a further fifty years," Tony Johnstone-Burt, Master of The Queen's Household, said about the renovations. "On completion of the work, we'll have a Palace fit for purpose until 2067," he added. The short video posted on the royal family's Instagram account won't be the only upgraded view we get to see of the famous building--the reconstruction program intends to expand public access and opportunities for visitors.

A YouTube video posted to the royal family's channel shows a visual of the new tech in action as design changes are worked on. "As architects, we're very aware that [the renovations] are a significant investment of public money. We're consciously using technology such as Point Cloud surveys to ensure that we get a good return on their investment," architectural lead Tony Barnard said, adding that the alterations will allow the palace to be "more accessible and function better." The designers are also working to make the palace a more eco-friendly, efficient space — they hope to reduce it's carbon footprint by 40 percent over time.

This phase of Buckingham Palace's reservicing is set to be completed in 2027. In the mean time, visitors can take a classic tour of the iconic building and enjoy a spot of afternoon tea among the gardens — a little royal excursion never hurt anybody.