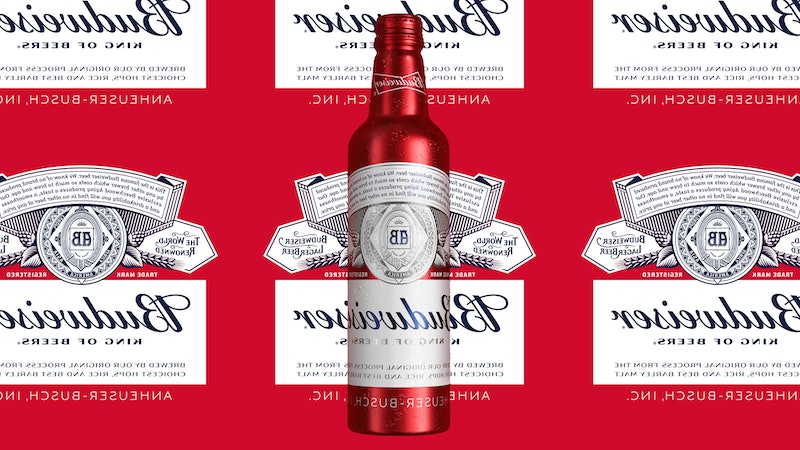 We’ve all made the rookie mistake of trying to take a selfie while sporting something with words on it. You want to show off what you’re sipping at your Super Bowl party...but now everyone thinks you’re drinking something called...“etiL duB”? In an effort to solve a small but super annoying problem, Budweiser released #SelfieBud during Super Bowl LIV weekend.

As its name suggests, it’s a beer specifically made for taking selfies. To be clear, the beer tastes exactly like any other bottle of Budweiser. (Science hasn’t made a beer that tastes as good as an Instagram like feels just yet.) It’s the packaging that gives Budweiser’s #SelifeBud its social media-focused name.

Budweiser SelfieBud is a special-edition bottle label that has Bud’s classic red label...just flipped backward. Designed as a mirror image of the traditional logo, SelfieBud is made to look good in selfie mode on apps like Instagram, Facebook, Snapchat, TikTok, and WeChat. Finally, a beer label that looks as good as you do. Or at least doesn’t distract from your smiling face.

IRL, the beer admittedly looks a little bonkers since the label is a reversed image. So, in selfies, all looks fine and good, but in person, it does seem like you and your beer just Alice in Wonderland-ed yourselves out of a mirror.

“SelfieBud is the first beer in history made for the selfie generation,” Lisa Smith, Executive Creative Director at Jones Knowles Ritchie, said in a press release. “Brands spend millions of dollars to look their best on social media, yet there are still many untapped opportunities to innovate with identity and design to make the most impact on these platforms. If phone cameras can flip our beloved brand logos correctly, why shouldn’t our social media apps?” Thus, Budweiser answered a question we didn't even know we were asking.

The selfie-focused packaging made an exclusive debut at the BUDX Super Bowl Weekend takeover in Miami, a Super Bowl 2020 party which hosted 200 celebrities and social media influencers including Gabrielle Union, Dwyane Wade, and Halsey.

There’s no word yet on whether the backward Bud will be available for the masses. For now, it appears to just be a limited-edition Super Bowl party exclusive. In the meantime, you'll just have to keep rotating your photos like rest of us.