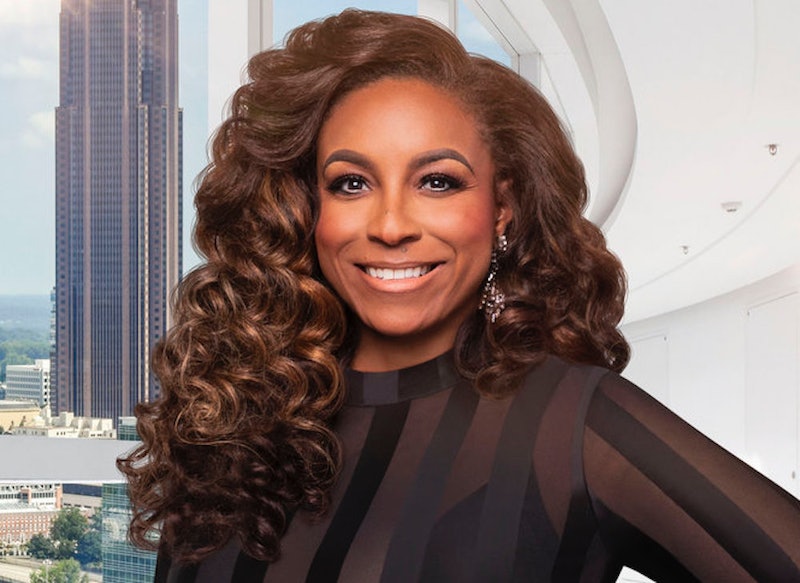 A new season of Married To Medicine (its seventh) is coming to Bravo on Sunday, Sept. 8, and with it comes a new star, to boot. Buffie Purselle is joining Married To Medicine. Since everyone on the show is a doctor or married to a doctor, Buffie fills that requirement by being married to psychiatrist Dr. David Purselle, according to her Bravo bio. However, she has quite a resume of her own.

Her Bravo bio says that Buffie is "a tax and personal finance professional." She has 20 years of experience in the tax and finance world after graduating from Georgia State University in 2000 with a degree in business, according to her LinkedIn. She was basically predestined for her career because she's a third-generation tax pro, according to her Bravo bio. According to her LinkedIn, Buffie also started two of her own businesses throughout her career. She's the managing member of Buffie the Tax Heiress and has been since 1999. In 2014 she also started Buffie, LLC where she helps business owners with "management solutions."

Per her Bravo bio, Buffie also helps run Georgia Psychiatric Consultants, her husband's medical practice in Atlanta. In addition to working in Atlanta, Dr. David is licensed in Puerto Rico. The couple has a telemedicine practice there as well, and Buffie and Dr. David live there for half of the year.

It's hard to imagine that they would have any leftover time after all that, but they do! Her Bravo bio says that Buffie and David renovate their various homes and rental houses in their spare time, and Buffie is also a patron of various charities. She volunteers for three different organizations at the moment, according to her LinkedIn. Since 2015 she's been an image consultant at the Atlanta chapter of Dress For Success. In 2016, she began volunteering at the Partnership Against Domestic Violence. And, in 2017, she became a board member for the Introducing Youth to American Infrastructure foundation. The organization helps create future business opportunities for local youth.

When she's not doing all of that (which is already so, so much) Buffie is a mom to two labradoodle pups named Louie and Prada.

She seems pretty excited to be on Married To Medicine and get to show off her life, her business, and her husband. She posted a photo to her Instagram of her doing sit down interviews with Dr. David and captioned it "Dr. & Mrs. David Purselle 🥼💕💍." She added in another post, "I'm not your average Doctor’s wife..." so viewers can look forward to getting to know even more about her on the show.

And while Bravo shows are known for their drama, Buffie may have the head to stay above it all. Her Bravo bio says that her motto is, "If you look for the bad in people you will surely find it," so Buffie instead seeks to find the good in all situations. She may need that attitude on the show as she deals with the ups and downs of reality TV, but judging by her extraordinary resume, Buffie is ready for anything life throws her.

More like this
Laura Tott From 'First Dates' Married Her Long-Term Mystery Boyfriend
By Darshita Goyal
Nadia's Breakups On 'Indian Matchmaking' Haven’t Stopped Her Search For A Husband
By Amanda Whiting and Brad Witter
Is Nathan Fielder Dating Anyone? What 'The Rehearsal' Star Has Said About His Relationships
By Grace Wehniainen
Nicola Walker’s IRL Husband Is No Stranger To TV Screens
By Darshita Goyal
Get Even More From Bustle — Sign Up For The Newsletter