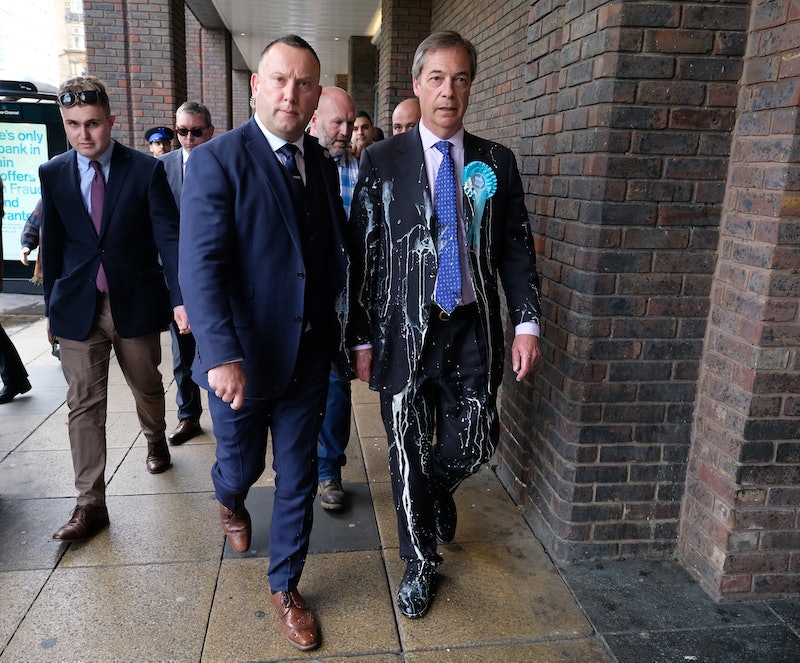 Milkshakes are one of life's treats. Liquid ice cream to fill you up and maybe make you feel a bit queasy after but heck, it's a part of the ride. Milkshake also has the ability to bring all the boys to the yard, or maybe that just works for Kelis. In recent years though, the classic fast food joint drink has become popular in a totally different way. It's become a bit of a symbol of political unrest in these strange times. So much so that the Advertising Standards Agency has decided that Burger King's tweet about milkshake encouraged anti-social behaviour.

Unless you've been completely ignoring the mainstream news over the last few years (can't and don't blame you), you'll be aware that lobbing milkshakes at people whose views you're not keen on has become a thing. So the media crew over at BK lounge thought they'd get in on the action and write a tweet hinting at the whole, well, milkshake thing.

The BBC reports that the tweet from May 18, which has now been removed, read "Dear people of Scotland. We're selling milkshakes all weekend. Have fun. Love BK. #justsaying".

The fast food chain's Twitter account has just shy of 50 thousand followers. And the timing of the tweet was a bit awkward as it was during the campaigns for the European elections. And according to their website it was deemed "irresponsible" by the Advertising Standards Agency (ASA). The ASA received 24 complaints about the tweet and following an investigation deemed the tweet to be condoning antisocial behaviour.

According to the BBC, in the run up to the elections, Former leader of the English Defence League (EDL) Stephen Yaxley Lennon (formerly known as Tommy Robinson) had milkshake thrown at him twice. And Nigel Farage has also been "milkshaked."

The issue became such that according to the ASA, one McDonalds in Edinburgh decided not to sell milkshakes or ice-cream products when Farage was due to speak at a rally nearby their establishment. Wow. Whoever thought milkshakes would become so political? And this isn't even relating to the dairy industry. The ASA made a statement regarding the tweet, saying that they got it was meant to be funny but basically, guys it's not the time for this.

"Although we acknowledged that the tweet may have been intended as a humorous response to the suspension of milkshake sales by the advertiser’s competitor, in the context in which it appeared we considered it would be understood as suggesting that Burger King milkshakes could be used instead by people to 'milkshake' Nigel Farage."

According to the BBC, Burger King responded to the decision made by the ASA saying it was meant in a light-hearted joke and that they disagree with the ASA's findings.

"Our tweet regarding the situation in Edinburgh was intended to be a tongue-in-cheek reaction to the situation. It appears some have misinterpreted this as an endorsement of violence, which we absolutely reject."