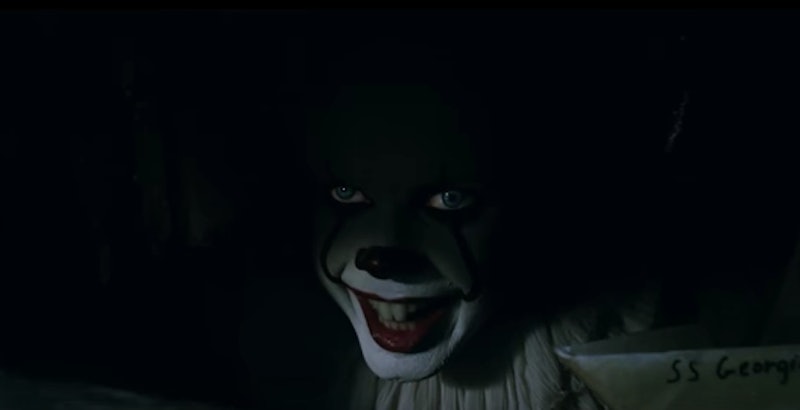 There is nothing better than a good feud — the colorful insults, the passive-aggressive shout-outs, the opportunity to extensively debate which side you're on. History is chock-full of fantastic rivalries (Alexander Hamilton vs. Aaron Burr, Bette Davis vs. Joan Crawford, Taylor Swift vs. Katy Perry) but perhaps one of the most exciting and divisive ones of our time has not been between two people, but between two companies. I'm talking, of course, about Burger King and McDonald's. And last month, Burger King upped their feud game with an "It"-themed commercial that viciously drags clowns. Sorry, Ronald.

At a September 27th German pre-premier of It, the movie based on Stephen King's novel about a murderous clown, Burger King projected two spotlights on the screen right before the credits began to roll. "The moral is: Never Trust a clown," reads the first one, followed by a smaller spotlight with the Burger King logo.

"Turning 'It' into Burger King's longest ad ever," the company wrote in the promotional video. SHADY.

The stunt is, as I imagine most of you will have surmised by now, a reference to McDonald's mascot, Ronald McDonald, a cheerful clown with an '80s soccer mom haircut and oversized shoes, who has certainly haunted some kids' nightmares, but has never murdered them.

But while Burger King Germany saw the movie as an opportunity to drag their competitor, in Russia, the company saw It as an unfair promotion of McDonald's. According to The Hollywood Reporter, Burger King Russia tried to ban the horror movie from Russian theaters because it claimed the film's main villain, the clown Pennywise, bears too much of a resemblance to Ronald McDonald, and therefore would serve as an advertisement for the rival fast food chain. (Perhaps Burger King Russia executives didn't watch the movie, because I can't imagine a lot of people who saw it would think "After watching Pennywise kill children for two hours, I'd sure like to get a burger surrounded my pictures of clowns that look like him." But hey, that's just me.)

Even before Burger King's It stunt, Ronald McDonald was having a bit of an identity crisis. In 2010, the company Corporate Accountability International called on McDonald's to retire the clown, who has been their mascot since the early '60s. CAI claimed that because the Ronald McDonald marketing was primarily targeted towards children, it was contributing to an epidemic of childhood obesity. McDonald's denied these claims, and in 2014, they even gave him a makeover, swapping out Ronald's signature yellow jumpsuit for yellow cargo pants and red jacket. (This new look did not go over well on the interweb.)

And while McDonald's has been trying to rejuvenate their mascot, Burger King has been reaching out to a more, ahem, adult audience. This Valentine's Day, Burger King Israel launched an "Adults Meal" which featured two Whoppers, two fries, two beers, and a "romantic" adult toy.

But Burger King's slightly less salacious It stunt has certainly been a successful (and less salacious) campaign. It has been one of the biggest horror movies ever, earning $123 million its opening weekend, and Burger King was smart to tack on to its wild success. And the spotlights were not a one-time troll. Burger King has been urging customers to use the hashtag #nevertrustaclown for promotions.

Neither the McDonald's company nor Ronald himself have commented on Burger King's trolling of them yet, though I would imagine they're not.... loving it. (I'm sorry, I'm sorry! I managed to make it a whole story without making that joke and while I think I deserve some credit for that, I will see myself out now.)