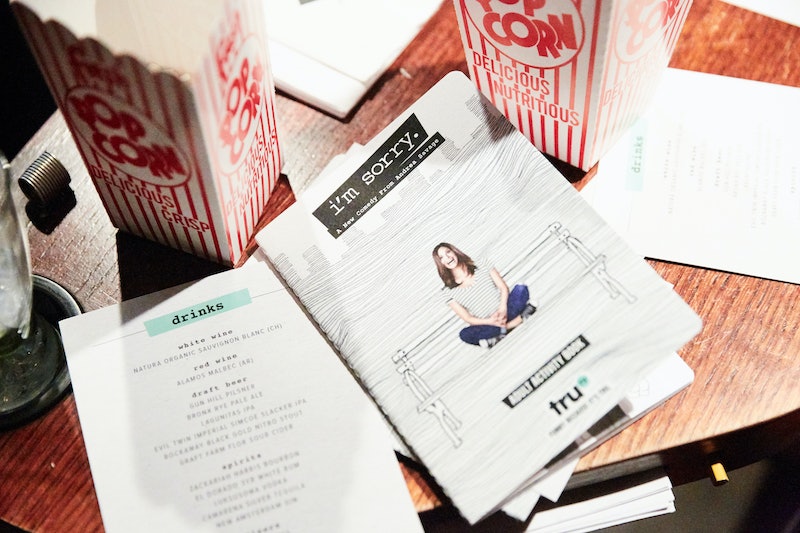 Earlier this week, Bustle and truTV hosted "Can't Make This Sh*t Up," a night of storytelling inspired by comedian Andrea Savage's brand-new show, I'm Sorry. The series, which premieres on truTV on July 12, fictionalizes Savage's bonkers, real-life experiences as an entertainer, wife, and mom. So what better way to honor her than by opening up our own diaries for a dramatic reading?

The event took place at Nitehawk Cinemas in Williamsburg, where crowds gathered for a night of snacks, drinks, and entertainment. Our emcee was Caroline Goldfarb, who you might know as the mind behind the hilarious Instagram @officialseanpenn, or the host of the podcast "This Week Had Me Like." Once she warmed up the crowd, Bustle's storytellers took the stage, sharing their accounts of the most bonkers things that have happened to them.

Read on to find out all the cringeworthy details.

The venue was an intimate one, set up like a dinner theater. Buckets of popcorn awaited each guest at their seats. Caroline Goldfarb kicked things off with a story about an ill-fated trip to an Eastern medicine herbalist, who prescribed her medicinal tea with an upsetting key ingredient — insects.

Then, Bustle's storytellers took the stage. Kathryn Kattalia, Bustle's senior lifestyle editor, was the first to share her story. I won't corrupt the event by sharing too much, but the tale involved a post-college final rush of lust with her then-boyfriend, which may or may have involved an unintentional hurl. The story has a happy ending — they're still together to this day.

Next up was Bry Crasch, Bustle's senior creative lead, who came in hot with an anthology of stories about his time working at a very famous theme park in Central Florida that shall remain nameless.

Rounding out the warm-up was Amanda Richards, Bustle's associate fashion editor, who took us through a potentially life-changing evening she had at the "hottest club in Cleveland" during college.

We laughed. We cried. We ate risotto balls and flatbreads, and we drank wine in solidarity with our brave storytellers. (Shout out to the wonderful servers who kept my glass of sauvignon blanc fresh all night.)

With the crowd warmed up, they two hilarious episodes of I'm Sorry played and we got to take in some of Andrea Savage's "can't make this sh*t up" moments.

From a tense stand-off with a woman in her dancerobics class that ends in profanities, to a noble attempt to find out who outed the adult film past of one of her daughter's friend's parents, to the alarming racist period her daughter goes through and her efforts at damage control, we were treated to an hour of Savage's own MA-rated life events turned into comedy. And while things may have been heightened for the sake of the show, these things all actually happened to her. Reality is stranger than fiction, friends!

All in all, it was a Wednesday night out to remember. There was plenty to talk about afterwards. If you're having FOMO, we get you. After all, this group of happy theater-goers went from strangers to best buds over the course of the evening.

But if your FOMO is too much to deal with, there's an easy fix. Watch Andrea Savage's I'm Sorry on truTV, premiering July 12 at 10/9 c.

This article is sponsored by truTV's I'm Sorry.