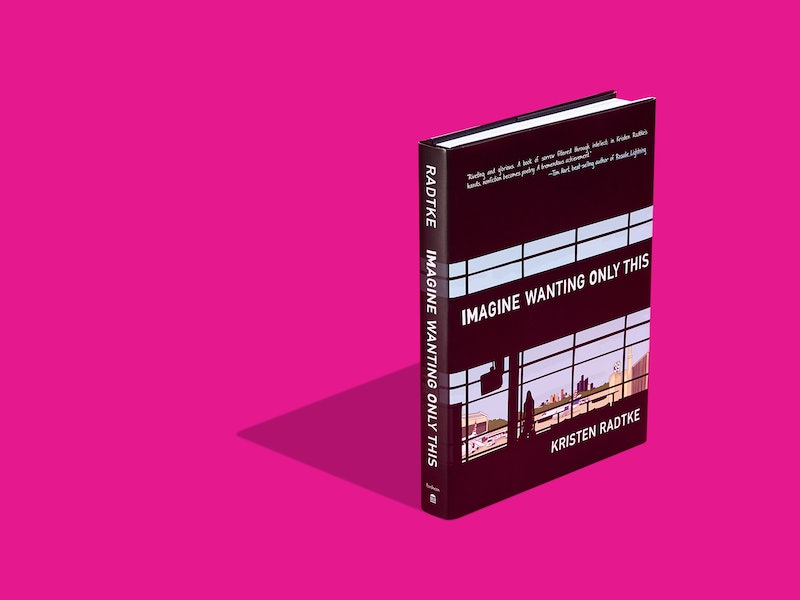 In college, Kristen Radtke lost her beloved uncle to a rare, little understood genetic heart defect that doctors suspect might also be encoded in her own DNA. ("It's like mush," she writes in her memoir. "The heart beats itself to mush.") In the aftermath of his death, Radtke developed an obsession with ruins that propelled her through early adulthood and helped her come to terms with life's most bittersweet truth: everything — and everyone, including her — is temporary. In her graphic memoir Imagine Wanting Only This, out on April 18 from Pantheon Books, Radtke tells the story of her grief and search for meaning through a juxtaposition of grayscale drawings and concise, propulsive prose.

"I just find it very interesting that I now have two different ways to convey an idea," Kirsten Radtke tells Bustle. "I can sort of travel between the two of them, and I think that's really exciting."

Radtke, who has a master's degree from University of Iowa's nonfiction writing program, says she didn't begin to incorporate drawings into her writing until her final semester of grad school. "It was a slow process after that, it still took me a couple of years for me to decide to make the whole book a graphic," she says. "Just because I was teaching myself how to draw cartoons while I was actually drawing the cartoons." Imagine Wanting Only This is her first published book, and the process of writing and drawing it took her nearly five years. "So much of the early stuff I drew, I just did it totally wrong," she says. "To the point that I couldn't go back and edit it later."

Despite the trial-and-error, Radtke doesn't think she could return to straight writing, sans drawing, now that she's discovered this medium. "I just think this way now," she says.

Imagine Wanting Only This by Kristen Radtke, $15.57, Amazon

The transient beauty and piercing sadness of the ruins is gorgeously portrayed through the combination of word and illustration; graphic memoir feels like the necessary medium for this story. Over the course of the book, Radtke recounts her travels to abandoned cathedrals in Indiana, to deserted mining towns in Colorado, to forgotten cities in Angkor, and to the sparsely populated Icelandic island village of Heimaey, where dozens of homes and buildings were frozen in time by volcanic debris that rained upon the village during an eruption in the early '70s.

Even the places she's called home are viewed through the lens of the ephemeral; she describes them in terms of their current or future ruin. "It was brown and thick and full of trash," she writes of the Ohio River in Louisville, KY., where she lived after grad school. "Because people put their feet in it even though they can see the trash. Because they sit on their docked boats while driftwood bobs around them. When the air is still the water looks like earth." In several pages of drawings, her current home, New York City — quite literally the opposite of a ruin — is imagined by Radtke as the apocalyptic state that climate scientists believe could be a reality in a matter of decades. "Now I live in a city the news tells me might someday soon be underwater," she writes. "I like to imagine what this will look like."

The book ends with an unspoken question: how do you to make your life meaningful while you're here — before you're ruins, too? For Radtke, the answer is at least partially found in her work: she's currently working on a series for New Yorker about urban loneliness, and she's writing her next graphic work, a novel about female friends and the perilous men who come in and out of their lives. "I keep calling it my book about terrible men," she says. Though not a memoir, the new book will also be informed by Radtke's own stories. If Imagine Wanting Only This is any indication, Radtke's life — and the way she beautifully elevates her deeply personal experiences into universal lessons — makes for brilliant, compelling, unforgettable art. That's why you should put Imagine Wanting Only This on your spring reading list.

Imagine Wanting Only This by Kristen Radtke, $15.57, Amazon

More like this
Prince Harry Incorrectly Recites Christina Aguilera’s “Genie In A Bottle” Lyrics
By Jake Viswanath
Michael B. Jordan Tackled His "Public Breakup" With Lori Harvey On 'SNL'
By Brad Witter
46 Comfortable, Polished Basics You'll Wear Constantly That Are Under $30 On Amazon
By Nina Bradley
The 10 Best Brooklinen Alternatives
By Lauren Moison
Get Even More From Bustle — Sign Up For The Newsletter
From hair trends to relationship advice, our daily newsletter has everything you need to sound like a person who’s on TikTok, even if you aren’t.