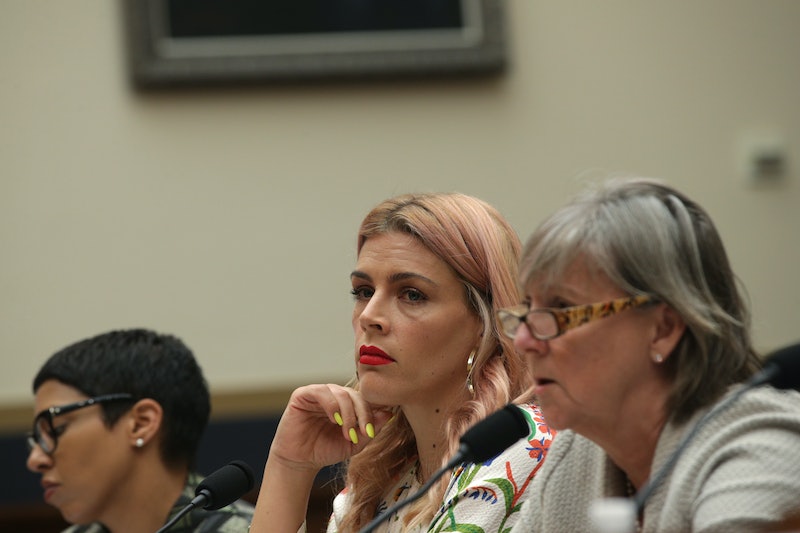 On Tuesday, actress, mother, and activist Busy Philipps gave a testimony on abortion rights before Congress. Earlier this month during her talk show, Philipps revealed that she was one of the one in four women in America who get abortions in their lifetime. During her congressional testimony on Tuesday, Philipps spoke once more about her experience at a House Judiciary subcommittee hearing, taking on a few opposing arguments in the process.

In her opening speech, Philipps explained the circumstances around her abortion story. She said, "I had an abortion when I was 15 years old in my home state of Arizona in 1994. It was not a decision I made lightly, but I have never for one moment doubted that it was the right decision for me."

Philipps then went on to show how different her experience might have been if she needed to get an abortion in the same state in 2019. She said,

If I were that same 15-year-old in Arizona today, legally, I would have to get parental consent. I would have to undergo a medically unnecessary ultrasound, go to a state-mandated in-person counseling session designed solely to shame me into changing my mind, then take a state-mandated 24-hour time out to make sure I really know what I wanted. And finally, I would be forced to give the state a reason why.

Philipps went on, "Well, here's [my reason]: it is my body, not the state's. Women and their doctors are the ones who are in the best position to make informed decisions about what is best for them. No one else." You can watch the full video of her opening speech above.

Philipps first shared her story to the public on May 7, during a taping of her since-cancelled talk show, Busy Tonight. Philipps said in part, "I know that people feel very strongly about abortion, but let me just say this. Women and their doctors are in the best position to make informed decisions about what is best for them."

On Tuesday, Philipps shared how many people have since reached out to her and thanked her for telling her story. Specifically, she noted how many people have called her brave. "But the word 'brave' didn't sit right with me," she said. "Why is it brave to speak to an experience that millions of people around the world throughout history have gone through?"

And then I realized, it is considered brave because as women we have been taught to feel shame about our bodies since birth. In my life, I have had many medical procedures, but no one has ever called me 'brave' for talking about them. Abortion is healthcare, and should not be treated as different from any other healthcare.

Later on in the testimony, Philipps was asked by Rep. Louie Gohmert if she believed "somebody who has survived an abortion... has a right when she’s born to life, to control over her body where someone else doesn’t take her life?” Gohmert was referencing Melissa Ohden, a woman in the room who was there to testify about her experience of surviving a botched abortion (as the fetus in question).

Philipps eventually said, “I don’t believe that a politician’s place is to decide what’s best for a woman. It’s a choice between a woman and her doctor.”

Gohmert pushed back, saying, “What about a baby and their doctor?"

Philipps replied, “I’m not speaking about birth, sir, I’m speaking about abortion." To learn more about the state of abortion access at the moment, you can read this breakdown of anti-abortion laws passed in 2019. You can also contact your legislators and let them know how you feel about abortion and reproductive rights.