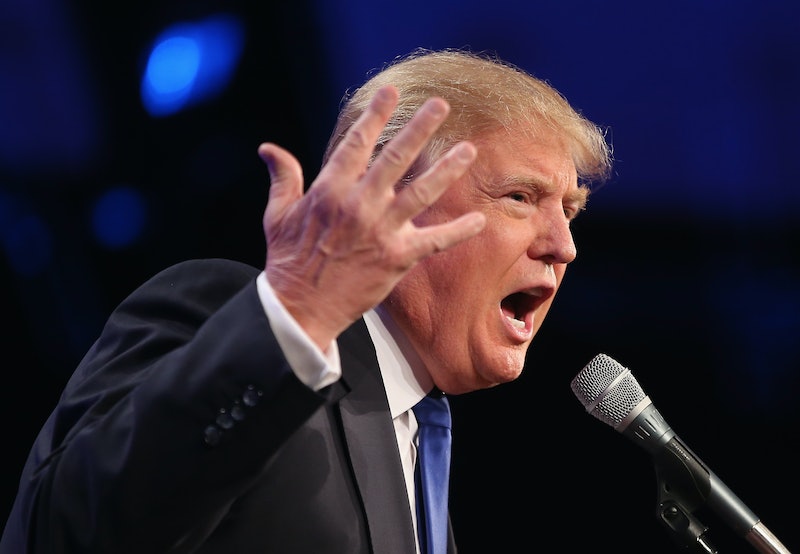 Even after Hillary Clinton's defeat in last year's presidential race, her email debacle may never end. It certainly looks that way, given that whenever there has been a controversy emanating from Donald Trump's administration, Republicans continue to bring up her reported use of a private email server while she was secretary of state — and in response, the faux outrage in the "but her emails" memes have become a rallying cry of sorts among Democrats, liberals, and the left at large. With every fresh controversy from the White House, mocking howls of "but her emails" have become a way to point out a breathtaking dearth of self-reflection displayed by the Republican Party and Trump's supporters.

These latest round of tweets came after The Washington Post alleged that Trump revealed classified information to top Russian envoys during a meeting. The groundbreaking story was then confirmed by BuzzFeed wherein one United States official confirmed the report and added, "It's far worse than what has already been reported." In response, the "but her emails" mock-protest has become a joke that many liberals and Clinton supporters use to point to the times Republicans lambasted her use of a private email server during her time as secretary of state. Although the FBI carried out an investigation into the matter and found nothing illegal, many Republicans nevertheless used it against Clinton. Remember when Trump himself vowed to lock Clinton up over the email controversy during the campaign?

The joke fittingly encapsulates the consistent denial on the part of Republicans who fail to see the troubling nature of Trump's behavior as the president of the United States of America. Some "but her emails" tweets pointed to allegations against Trump and ended on the note that Clinton's emails took precedence over all for Trump's supporters. Regardless, everyone seems to be aware of the irony of bringing up Clinton's emails during a rather chaotic point in Trump's presidency.

Perhaps the only statement that serves the Republican Party well at the moment comes from Sen. Bob Corker of Tennessee, who described the Russian fiasco at the White House as a "downward spiral."

While speaking with the media, Corker said, "[The White House] are in a downward spiral right now and have got to figure out a way to come to grips with all that's happening," adding:

[T]here's a really good national security team in place, there's good productive things that are underway through them, and through others. But the chaos that is being created by the lack of discipline is creating an environment that I think — it creates a worrisome environment.

And considering the latest fallout from the story that Trump shared classified intel with Russia, there's no denying that.