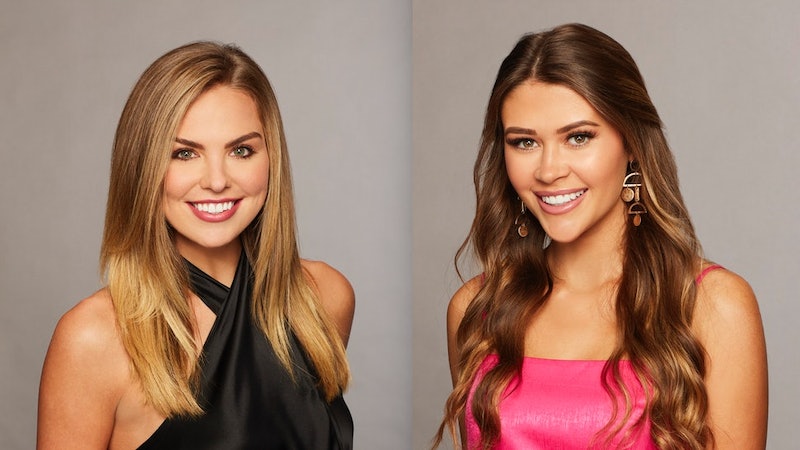 It isn't often that Bachelor contestants have history, but this season, two women that knew each other before they filmed the show could end up having some major drama. On Monday night's episode, Caelynn shared her true feelings about Hannah B. on The Bachelor, and even though these pageant queens were once friends, it definitely doesn't sound like they're on the same positive terms they used to be.

As they explained on last week's season premiere, Caelynn — Miss North Carolina USA — and Hannah — Miss Alabama USA — competed together in pageants, and as it turns out, they were even BFF for awhile. But the story goes much deeper than that, and Caelynn took the opportunity to open about it when Hannah was gone on her one-on-one date with Colton.

It's surprising to hear Caelynn's comments after she and Hannah seemed happy to see each other when they ran into each other in the mansion on night one, but was it all an act? It's possible. In fact, according to what Caelynn said, they got really close when they were both competing in Miss USA together, and then a little jealousy seemed to be what ultimately ruined their friendship for good.

"We competed at Miss USA together. She's Miss Alabama and I'm Miss North Carolina. We were roommates at Miss USA. We were super close and then she was not happy that I was first runner up. She was mad she didn't place for sure. There were a lot of hurt feelings. With Hannah, there's a facade and then it starts to crumble. Hannah flipped a switch. I was like, 'whoa, this is a whole new Hannah.' So being in this environment, it's pretty similar. I have no doubt that the switch will be flipped soon. I think it will happen pretty quick."

Caelynn is right about the competitive environment of The Bachelor bringing out different sides of people; as we've seen on seasons past, the mansion tends to be a lot like a pressure cooker. Because of that, the Hannah she's describing could end up coming out later this season... or maybe not.

It's important to remember that we don't have the full story here — Hannah wasn't even around to hear what Caelynn had to say, so fans have no idea if what Caelynn said was true.

Maybe, Hannah will have the opportunity to explain herself later on, but it seems like her supposed feud with Caelynn will eventually come to a head. Is it too early to say that these two might end up on the dreaded two-on-one date of the season? Given how well The Bachelor lends itself to that kind of drama, it wouldn't be surprising at all.

Time will tell if Hannah behaves the way that Caelynn said, but until something happens that proves her right, it's probably for the best to give Hannah the benefit of the doubt. So far, Colton really seems to like her, so that must count for something, right?