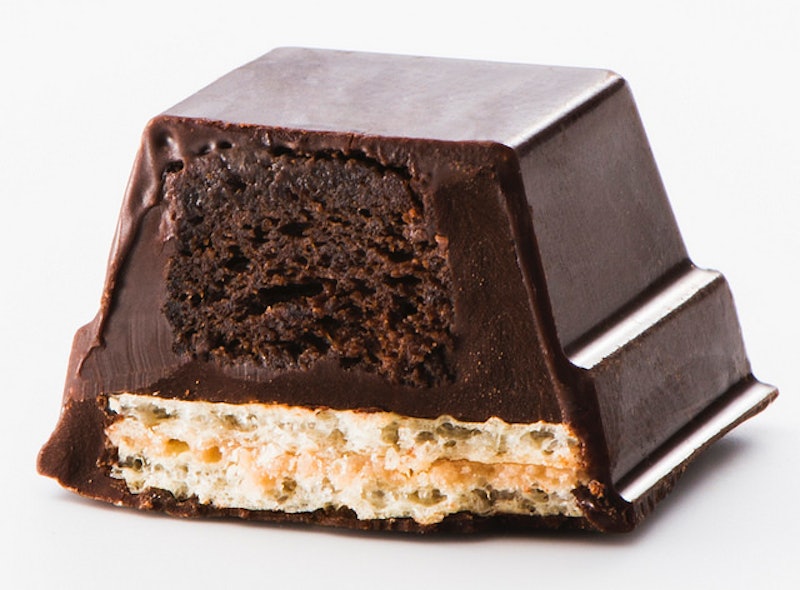 One of the things I love to do when traveling is sample Kit Kat candy bars from other countries because they taste different, and different countries have different varieties. Case in point, cake-stuffed Kit Kats exist now, and you can get them in Tokyo. Japan is at the forefront of the gourmet Kit Kat trend; the country offers more than 300 flavors, including the new Kit Kat Chocolatory Gateau Mignon, aka the cake-stuffed Kit Kat. According to CNN, part of Kit Kat's success in Japan comes from the translation of the name of the candy. "Kit Kat sounds very similar to 'kito kato,' which in Japanese means 'to surely win.'"

Personally, I think the cake-stuffed Kit Kat sounds like a winner, in part because it solves the problem of how to eat cake on the go without wearing most of it. This candy that's giving me major FOMO is not only just available in Japan, it's only available at one place — the Kit Kat Chocolatory, Ginza.

"The Kit Kat Chocolatory Gateau Mignon has been created to mark the re-opening of the flagship Chocolatory store and cafe in Tokyo’s upmarket Ginza district," Oona McGee reported for Rocket News 24. "The new chocolate is one of a number of treats that will be available for sale exclusively at this branch only."

The cake-stuffed Kit Kat, which adds a new texture to your favorite chocolate-cookie wafer by adding a soft, chewy piece of gateau chocolate cake inside the top layer, isn't the only treat that's going to make you want to hop the next flight to Japan. The Kit Kat Chocolatory stores, which are basically every Willy Wonka lovers dream come true, are also rolling out some other creative Kit Kat recipes.

The Below Freezing Chocolatory "contains a selection of single-bar Moleson Kit Kats, cooled to sub-zero temperatures with dry ice, along with a matcha-topped ice-cream filled monaka wafer bar, served in a chilled glass to create a perfect summer treat," Rocket News 24 reported.

If you want to mix your Kit Kat with some ice cream — it is still National Ice Cream Month stateside after all — the Kit Kat Chocolatory Parfait is for you. This unicorn-colored dessert combines a special chocolate fondant, pieces of fresh fruit with three types of ice cream, and three fruit-flavoured Kit Kats for the creamy and refreshing dessert you've been craving. Um, yum!

Wait, there's more! If you know someone who thinks Kit Kats are the perfect gift, you can personalize some Kit Kats and give them to your friend. The Kit Kat Chocolatory Sublime Original Message service gives new meaning to the traditional candy gram. It allows customers to create personalized messages on the surface of Sublime-brand Kit Kats, which are then packaged in a beautiful box, making Kit Kats a totally reasonable gift.

So, why aren't these amazing Kit Kat options available in the United States? Kit Kats have been made by Nestlé since the late '80s, after the company was purchased from Rowntree’s in 1988, in most parts of the world, but are manufactured by Hershey's in the U.S., which is why they taste different.

But, fear not. If you really can't handle the FOMO, you can order some of these Japanese Kit Kat varieties online. Phew!