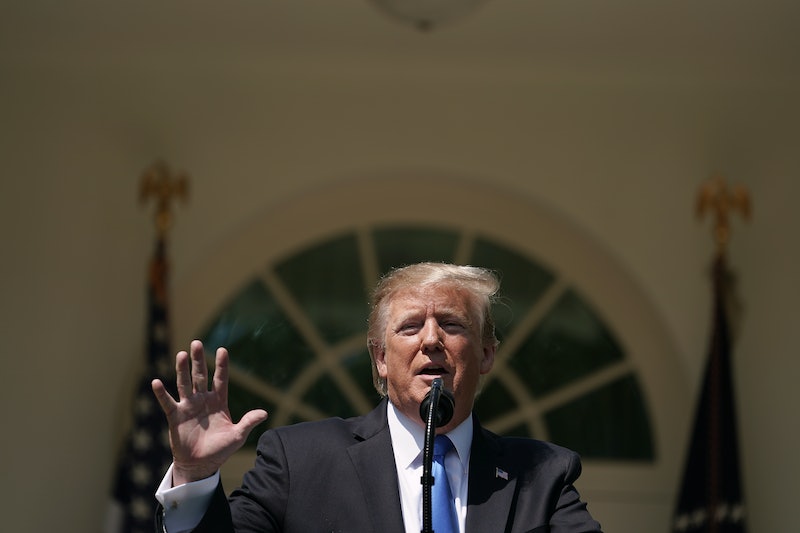 California is once again looking to force President Donald Trump — and every other presidential candidate — into releasing at least five years' worth of income tax returns. In fact, a bill passed Thursday by the state's Senate may result in California's 2020 ballot excluding Trump unless his tax returns are made public.

"President Trump's refusal to release his income tax returns has broken a time honored, bi-partisan tradition which has weakened our democracy and his jaw dropping business conflicts have now put the security of our nation at risk," Democratic state Sen. Mike McGuire, who co-authored the bill with Sen. Scott Wiener, said in a statement released last month. "There's a lot at stake and there are serious, pressing questions that need to be answered before Election Day, which is why Senator Wiener and I are advancing this critical transparency bill."

If fully passed into law, California Senate Bill 27 would enact the Presidential Tax Transparency and Accountability Act, requiring every presidential candidate to file income tax returns for the previous five years with California's secretary of state in order to have their name appear on a primary election ballot. The state's secretary of state would then release a redacted version of the candidate's tax returns to the public within five days of the initial filing date. If passed by the California State Assembly and signed into law by Gov. Gavin Newsom, the bill would take effect immediately, thus impacting the 2020 presidential elections.

All 10 of the Republican lawmakers in California's state Senate voted against the bill, The Hill has reported. According to the Associated Press, they expressed concerns the bill is unconstitutional.

In a speech on the floor of the California Senate prior to Thursday's vote, McGuire argued that transparency was a vital component of democracy. "We can all debate on the floor about the constitutionality of this bill," the news outlet reported he said. "But we also have to look at what makes our democracy strong. The foundation of any successful government is transparency."

This isn't the first time that California legislators have attempted to make the release of Trump's taxes a prerequisite for appearing on the ballot. According to the Los Angeles Times, a similar bill was passed by the state's legislative body in 2017 only to be vetoed by then-California Gov. Jerry Brown, who'd argued that such legislation might lead to what he called additional dangerous litmus tests for candidates seeking federal office. It's worth noting that, according to the Associated Press, Brown never released his tax returns while in office. Gov. Gavin Newsom, Brown's successor, has not only made his tax returns public but also painted himself as a vocal Trump critic, the news outlet has reported.

It's unclear, however, if that means Newsom would sign the bill into law if given the change. A spokesperson for the governor tells Bustle the bill "would be evaluated on its own merits" should it land on Newsom's desk, "as is the case with all proposed legislation."

But California reportedly isn't the only state seeking to make the public release of tax returns a prerequisite for appearing on a ballot. According to the National Conference of State Legislatures, similar bills have recently been introduced in at least 18 states, although some of those bills have already died or failed to advance.