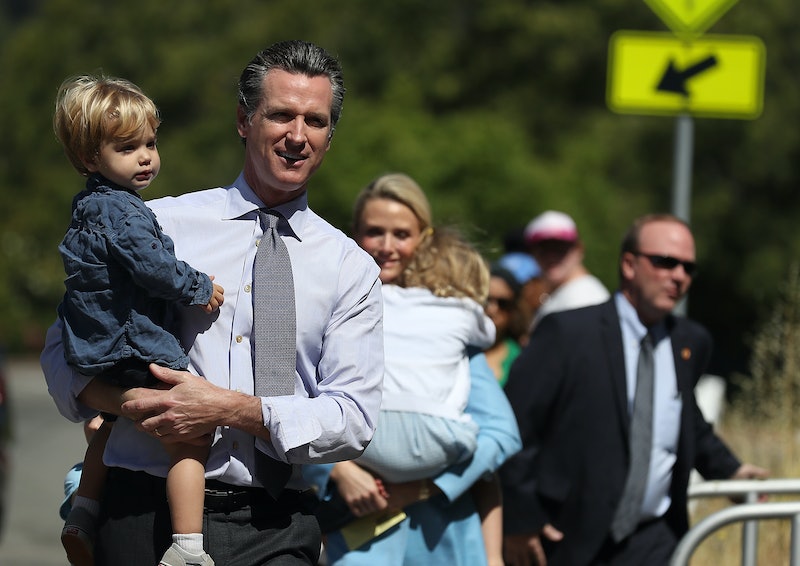 It's no surprise that the United States' policies on paid family leave drag well behind those of other industrialized nations. But newly elected governor Gavin Newsom is setting out to change that — California's new paid parental leave proposal would set a progressive record for the nation, potentially allowing a full six months of partially paid time off for new parents.

Currently, California offers six weeks of partially paid leave for new parents. Mothers who have just given birth are also able to take up to four months of disability leave, which depending on the circumstances, they could receive partial pay for. That's actually still better than the rest of the country though — the United States is one of only two countries in the world that doesn't federally require paid maternity leave for working mothers.

"Look, the whole world has this, except for the United States," Ruth Milkman, a sociology professor at CUNY told HuffPost. "This is not some utopian proposal. In the U.S. it would be a breakthrough."

The United States doesn't require any paid leave, in fact, although under the Family and Medical Leave Act, parents are guaranteed 12 weeks of unpaid, job-guaranteed leave to care for a newborn or adopted child. Newsom's plan, rolled out as part of his proposed 2019 budget, would guarantee six months of partially paid-leave to be split between two caretakers.

According to HuffPost, Newsom's proposed plan would roll out slowly, and be mostly covered by existing state funds. "It’s a developmental necessity," Newsom said, according to the outlet. "We’re committed to this."

According to The New York Times, a 1 percent payroll tax is how California currently pays for its family leave policy. Newsom's budget predicts a relatively large budget surplus — $21.4 billion — that could go toward his paid leave plan, but another option would be raising the payroll tax income limit, or the payroll tax itself. That would require a two-thirds vote from the California legislature. "It’s a no damn brainer," Newsom told The Sacramento Bee. "I’m hoping the legislature feels the same because it’s going to cost some money."

The majority of research backs Newsom up on the benefits of paid parental leave, according to a literature review CNN conducted in 2015. From their assessment, paid parental leave has been shown to improve child health outcomes, raising the chances that babies are breastfed, get postnatal care visits, and vaccinations. Women are also less likely to experience mental health issues after delivering, and are more likely to return to work. That last finding in particular means that paid parental leave helps reduce job turnover and the associated costs of hiring and training for businesses.

European countries have long protected the kind of leave Newsom is trying to get installed in California. The European Union mandates that employers provide a minimum of 14 weeks paid maternity leave to new mothers, according to CNN. Individual countries are even more progressive. CNN reports that Italy requires 22 weeks at 80 percent of regular earnings, Ireland provides 42 weeks at partial pay, and the UK requires a full year, also at partial pay.