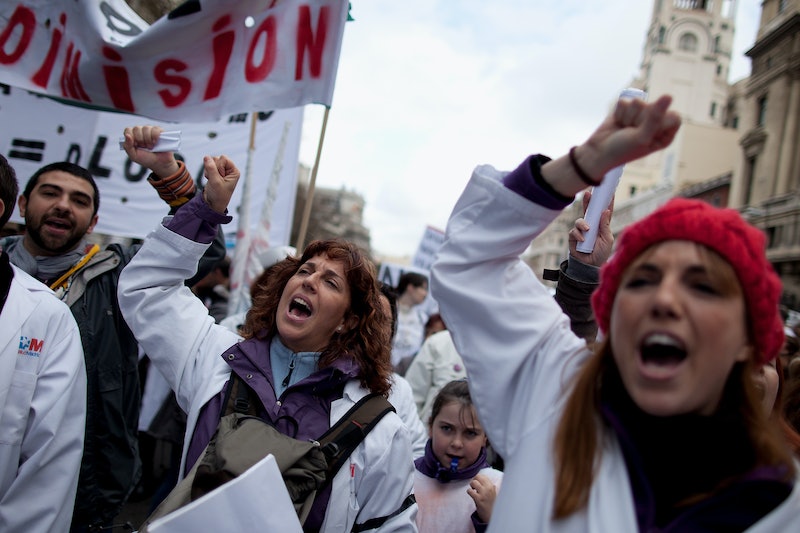 The Senate is locked in a vote-a-rama over the future of Obamacare that could stretch well into Thursday night. As Republicans try to bring a majority of Senators on board a plan to overhaul President Obama's signature health care law, Democrats are holding the line — with help from thousands of activists nationwide.

In the second-highest showing for any one day this year, Planned Parenthood supporters made more than 13,000 calls to Congress over the health care fight on Tuesday, July 25 — the same day Sen. John McCain returned to Washington to cast a decisive vote in the effort to begin debate on dismantling Obamacare. More than 22,000 calls from MoveOn members were made to elected representatives, according to the group's Washington Director, Ben Wickler.

"The reason Senate Republicans have been unsuccessful in jamming through a Trumpcare plan so far is because of the overwhelming number of calls, letters and tweets."

“The reason Senate Republicans have been unsuccessful in jamming through a Trumpcare plan so far is because of the overwhelming number of calls, letters and tweets from people across the country who believe they should be doing more than just ripping health care to shreds to deliver a political win for President Trump," Sen. Patty Murray, a Democrat from Washington and Ranking Member of the Senate Health Committee, tells Bustle in an exclusive statement.

"This is the 11th hour," Murray says. "Keep making your voices heard and make sure Republicans know that if they jam through a partisan Trumpcare bill, they will be held accountable.”

After unsuccessful efforts to repeal Obamacare outright, issue a replacement, or pass a bill that would delay a repeal two years into the future, Republicans are locked in on their latest plan to overhaul the health care law, known as the "skinny repeal." That would leave large portions of Obamacare in place, while stripping away some of the key provisions of the law, including the mandate that requires each individual to have insurance or face a penalty, and the mandate penalizes employers who fail to offer insurance to their employees. Tucked into the skinny repeal is also a provision to strip funding from Planned Parenthood for a year, while adding funding to community health centers as an alternative.

While the particulars of the skinny repeal are still in flux, an estimate of the bill by Democrats would leave 16 million more people uninsured and hike premiums up by around 20 percent, according to the nonpartisan Congressional Budget Office.