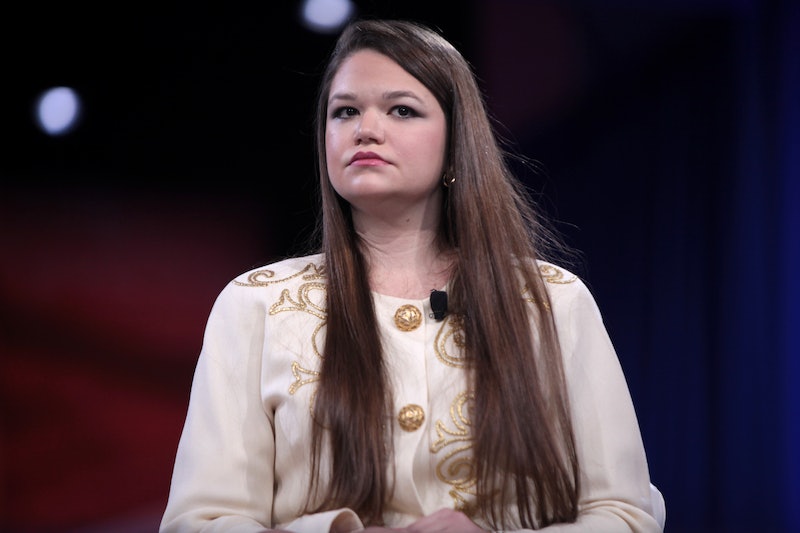 When Brittany Kaiser joins our video call from a white and gray conference room in the United Kingdom, she seems calm for someone who would soon testify in front of British parliament about her former employer, Cambridge Analytica. As former director of program development, Kaiser is at the center of the ongoing investigation of the political consulting firm that worked for the Trump campaign (and others), and is accused of improperly obtaining the personal data of millions of Facebook users.

While the headlines have focused on Cambridge Analytica’s leadership teams, Kaiser would soon be called upon to add what details she has about the firm’s operations. What did she know and when did she know it? Tuesday she faced those questions and more while she testified before the House of Commons Digital, Culture Media and Sport Committee about the firm’s involvement with the Leave.Eu campaign.

“I am a technologist. I am a human rights lawyer and campaigner. I'm a political animal,” she tells Bustle just days before her appearance in front of the committee. “I've always been interested in the ways that you can use new technologies to get people to care about politics.”

The 30 year-old former director says she first learned of the allegations against her past employer after she was dismissed from the firm.

The data in question comes from a personality quiz and app that scraped users’ Facebook profiles. While approximately 270,000 users consented to having their data collected, researchers were also able to capture the data of those users’ Facebook friends. That information — in the form of up to 87 million raw profiles — was then sold by the researcher to Cambridge Analytica, violating Facebook’s rules about selling data. Cambridge Analytica initially denied obtaining the data, but later acknowledged that it had. Further, the company claims it deleted the data set once it learned of the problem.

“Anybody in the world can manipulate Americans if they want to, without working with an American company, because the data industry allows you to do that.”

Kaiser claims that while she worked at the company, she didn’t know (or realize) what was happening behind closed doors, but is now looking back with a more critical eye — and is speaking out.

“With our involvement with Brexit, I now look back [on] it and I'm incredibly concerned at the way all of that was structured or unstructured or lied about,” she says. “When I start to realize that people like Alexander Nix or Aaron Banks or Steve Bannon or any of these guys were up to something that they maybe shouldn't have been up to, then why do I have to stand up for them?” she asks, citing the company’s leadership. “Why do I have to protect them?”

In January 2016, Kaiser was forwarded emails from the company’s chief data officer to Facebook claiming that the 2015 Facebook data set owned by the firm had been deleted. “I never thought about it again,” Kaiser says.

Referencing a recent undercover video showing Alexander Nix, the company’s CEO, suggesting potential bribery and entrapment, Kaiser hypothesizes that beyond the data set, there might have been wrongdoing by company executives “who decided to offer incredibly questionable, and possibly, illegal services to clients.”

Asked about the possibility that Cambridge Analytica in any way helped facilitate Russian meddling in the 2016 U.S. elections, Kaiser is dismissive.

“Russia, as far as I know, never used Cambridge Analytica,” Kaiser says. “They wouldn't need to. People from any country anywhere in the world can purchase data on individuals from the United States and can use Facebook platforms to come in and target whoever they want.”

From there, her warning about the data industry gets darker. “Anybody in the world can manipulate Americans if they want to, without working with an American company, because the data industry allows you to do that,” Kaiser tells Bustle.

How Does A Bernie Supporter End Up Working for Cambridge Analytica?

Kaiser would seem an unlikely candidate to work for a company that counted Ben Carson, Ted Cruz, and Donald Trump among its clientele. She was one of the first people to join Barack Obama’s presidential campaign in 2007, where as an intern on the new media team, she sat near Facebook co-founder Chris Hughes, and tested the social media platform as a means of political communication.

After the Obama campaign, Kaiser pursued opportunities abroad, where her work largely focused on human rights. In 2014, Kaiser was based in London, working on her Ph.D. in International Law and Diplomacy, and doing social media consulting on the side. In that capacity, she says she often found herself in the same client meetings as Alexander Nix, the CEO of Cambridge Analytica. In 2014, he recruited her to the SCL Group, where Kaiser worked until Cambridge Analytica was formally incorporated.

“I saw the opportunity to have a scientific method for validating results of campaigns,” she says of her decision to accept the position. “I wanted to use these tools for our humanitarian campaigns, for our social campaigns.”

As a special adviser, and later as director of business development for the company, Kaiser’s job was to bring in business. That involved “meeting with clients, figuring out what kind of capacities they had, what they had run in the past or data they had, who they had working for them, and therefore devise a strategy of what we could do to run their job,” she says.

“Now I realize that they probably didn't want me in those management meetings for a reason, because of the things that they were talking about that would have probably really freaked me out.”

That’s how Kaiser rationalized being employed at a company that worked on behalf of Trump. “I'm not a Trump supporter, but I'm not really a Hillary supporter, either,” says Kaiser, who voted for Bernie Sanders in the 2016 primaries. “The opportunity to have some kind of involvement in a U.S. political campaign is what any political animal would ever want.”

But as much as Kaiser enjoyed the work of the firm and the opportunities it afforded her, there were also internal issues that began to bother her.

Kaiser goes on to hypothesize, “Now I realize that they probably didn't want me in those management meetings for a reason, because of the things that they were talking about that would have probably really freaked me out.” Cambridge Analytica did not respond to requests for comment.

What Will Happen To Your Data Now?

Kaiser contends that most news outlets are missing the bigger takeaway from the revelations around Cambridge Analytica’s use of data.

“A handful of incredibly powerful centralized companies — that are doing something so technical that people do not understand — have had the ability to wield an unknown amount of power and exploit people up until this point,” Kaiser says, passionately.

Current estimates suggest that 87 million people had their data illegally shared from Facebook. Kaiser says it “easily has the possibility to be more” and she hopes that the attention this story is putting on data, will inspire change to “the exploitative nature of the way that data is used.”

Kaiser believes that personal data should be treated as property. “If somebody wants to license your data,” Kaiser says, “you should have the ability to not only know who that is and for what purposes they want to use that data, and you should get monetarily compensated for it.” Additionally, Kaiser argues that data should be portable, with individuals have the right to delete and move their data among platforms.

“Out of all of this madness, I've been given an opportunity to harness the momentum for something positive,” Kaiser says. “America still has the least protected data laws in the world.”

More like this
What Is Barack Obama’s Net Worth? He Makes *Way* More Now As An Ex-President
By Hugh McIntyre
How To Protect Your Digital Privacy If You Need An Abortion Post Roe v. Wade
By Kaitlyn Wylde
10 Times Diana & Meghan Spoke Similarly On The Royal Family
By Sophie McEvoy
How The City Healed Five Years On From The Manchester Arena Attack
By Ella Glover
Get Even More From Bustle — Sign Up For The Newsletter